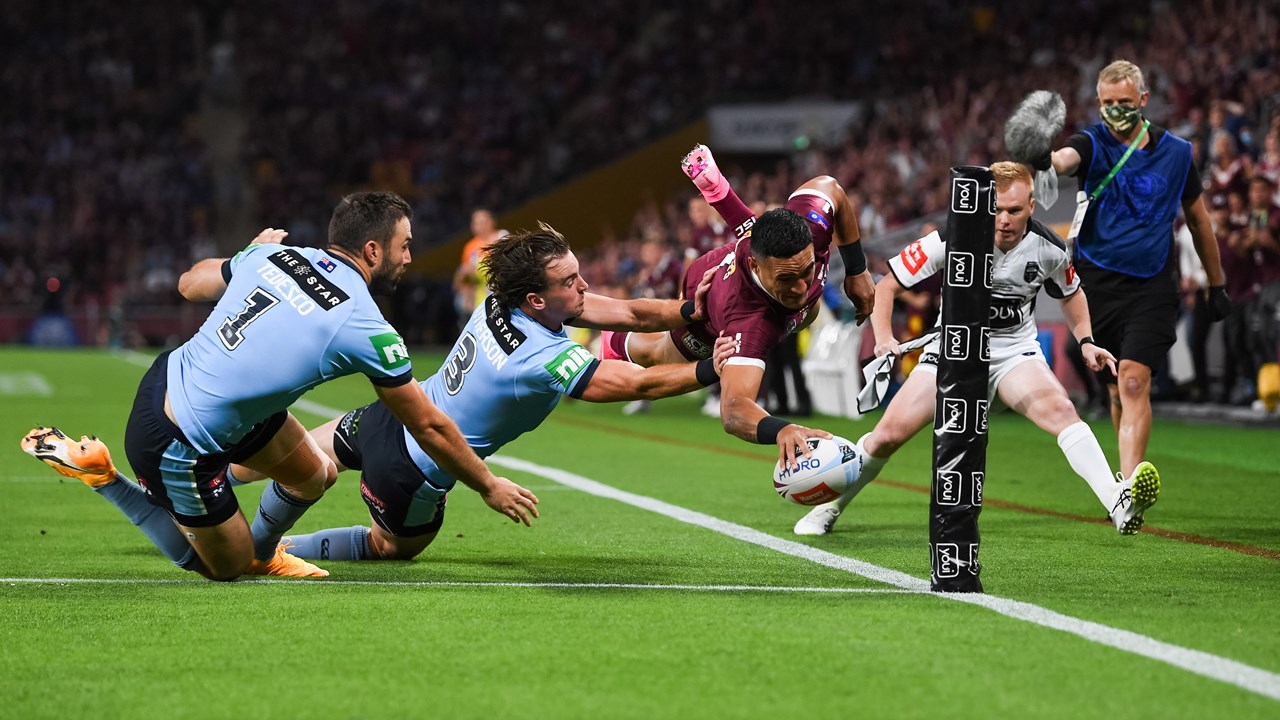 Valentine Holmes, who has maternal links to Cook Islands, scores the opening try in the final leg of State of Origin series. NRL.com/20111803

Queensland Maroons hold off late NSW Blues surge to win 20-14 in Brisbane. Valentine Holmes, who has maternal links to Cook Islands, scored the opening try in the final leg of State of Origin series

The Maroons, who entered the three-match series as underdogs, won the decider 20-14 early yesterday.

Holmes scored the opening try of the match to give his Queensland side an early lead.

Wearing the number one jersey but playing on the left wing, it took Holmes just four minutes to open the scoring in the decider. After a penalty had allowed the Maroons to piggyback their way up the field, they decided to run the ball on the fifth and went to the left.

The ball went through the hands, and debutant Corey Allan shuffled it out to Holmes, who was able to dive over out wide just inside the corner post.

Making things even better for Holmes was the conversion: the winger stepped up to take the kick and, even though it was right on the sideline, he was able to nail the shot and give Queensland a 6-0 lead early on.

The 25-year-old, who has maternal links to Cook Islands, went on to score eight more points – three conversions and a penalty goal.

He could have scored at least two more tries but dropped the ball with the line open.

“He played a brilliant game, he hasn’t really lost much form but then he missed two opportunities which I think during his heydays would have been easy tries for him,” Carlson said.

“It’s not in his character to make such mistakes like dropping the ball but then there was pressure towards the end of the game. Otherwise I think it was a good comeback for him.”

In a series where Queensland blooded 14 debutants, including four in the decider, the triumph will become a story for the ages.

Now the 2020 Maroons side will be etched in the history books as one of the great winners of a series against the odds, alongside the 1995 and 2001 teams which prevailed when given no chance.

In fact, skipper Daly Cherry-Evans in his post-game speech happily accepted the State of Origin shield on behalf of “the worst ever Queensland team”.

Coach Wayne Bennett said: “One of the things personally for me tonight was that it was 40 years since we started Origin, and the things Arthur (Beetson) and all those wonderful players displayed back then we displayed here tonight.

“There was the great Queensland spirit, the never give up attitude and doing it for your mate. It was all on display. I am proud of the fact that on our watch we were able to maintain the traditions and things that make Queensland great.”

Meanwhile Valentine Holmes’ superb form in the Origin is likely to earn him a Kangaroos call-up for the Rugby League World Cup 2021.

“Obviously it comes down to who he wants to play for. Judging from his form, the Australians will surely pick him in their squad.”