Returning to Wale from ‘outside’

Saturday 3 May 2014 | Published in Return to Pukapuka 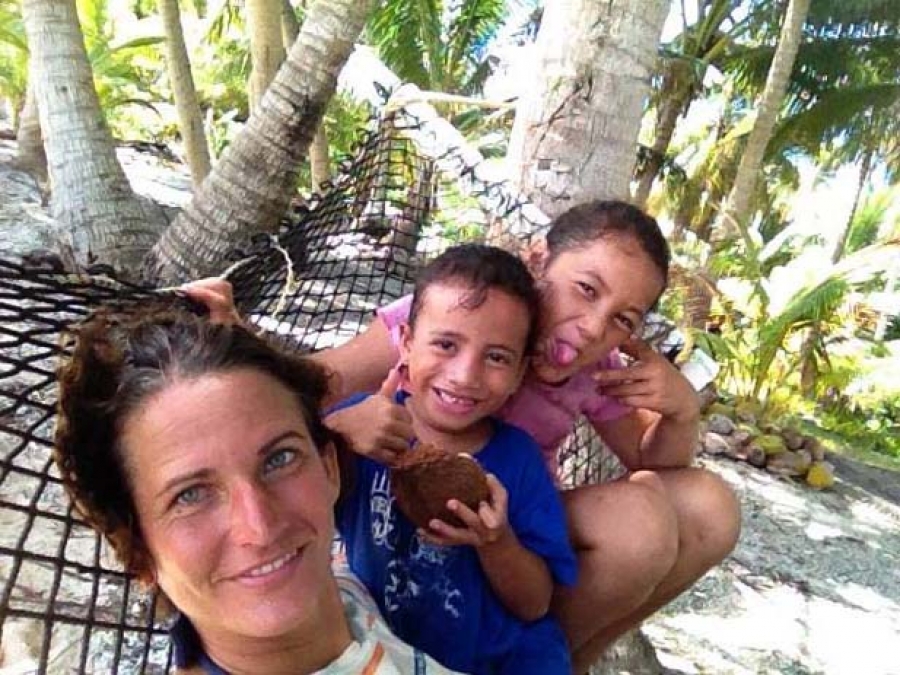 Amelia Borofsky returned to Pukapuka after a year away being on the 'outside'. 14050224

Dr Amelia Hokule’a Borofsky, who grew up in Pukapuka and Hawai’I, has again returned to her childhood atoll.

She originally returned to the northern group island to learn, teach and write. After almost a year away on the ‘outside’ – she is now back in Wale where she continues to document daily life and helping the community. She holds her doctorate in community and cross-cultural psychology. She is a regular contributor to CINews and the Atlantic Magazine online and today she shares her thoughts on her return to Wale:

I’ve come back to Wale after almost a year away because of going down to Rarotonga and Hawaii for Ministry of Education training and work, family and a small “holiday” – as Wales do.

These trips to the “outside” as we call it always take longer than one expects because of the transport challenges.

The kids have gotten a little older, there is a new principal and four of us new teachers, new faces of Wales returning and some old faces gone.

Three of the Wales on the boat returning had been away for 20 years or more and came to look after their aging parents.

Even after years away Wale remains the same, just a few more cellular phones, more youth playing candy crush and using the flashlight from the mobile to catch kaveau or coconut crabs.

The roosters still crow every morning, the men have been playing toto, the game of throwing sticks every afternoon on the main sandy road, Ngake village is out at Motu Ko, and the kids splash in the lagoon as the sun sets over Yato point.

In my absence, Ngake village has rebuilt our family pola home from 1978 on the Katoa family land in Tua.

The men cut the pandannus from Motu Ko last year, the Ngake youth fitted it together, the ladies plaited the palm fronds for a roof.

In the morning you can see the sun rise over the sea and in the evenings you can hear the waves pounding the reef.

“We have been looking after it for you,” they laughed.

It’s an immense gift with all the Ngake village men working together to make it happen and a gift from the Katoa family.

Uncle Willie Katoa said of his father, “Paleula told me if Ame ever comes back, you give her that piece of land.”

When I am on the “outside,” Aleti Katoa, my adopted brother, and his partner and daughter Tangitane will look after the pola beach home.

Wale offers a new sense of time. I could have been gone for years, or just have come home yesterday.

Every evening Papa Charlie comes over to the house to sit on the porch and angi angi or take in the wind and have a whiskey nightcap.

I won’t give him the whole bottle because it would be gone by morning.

“It’s good to come and have a little glass,” he said, “I am glad you’re back, but even when you’re gone, you’re still here.”

Then, laughing, he threatens to tie me to the coconut tree.

After years away, he returned to Wale to sit on his pink and turquoise porch reading The Book of Pukapuka and reconnect to his Frisbie family legacy.

In Wale there’s a strong sense of legacy, of time reaching far back and continuing far forward – a kind of circular time.

There’s the naming of your children after beloved family members or a particular accomplishment.

There’s Keyman, so named because her father was a key man in sports.

Her father will be remembered through her and then she will continue her own legacy.

Wale is a place that doesn’t forget and where people tell stories about people who have long gone.

Before Mima Katoa, my adopted Wale mom, passed away she said, “See you in Wale”.

Last week Loto Village officially gave me her taro patch to look after.

She’s here even when she’s not here. She lives on in the land and in stories and her children and grandchildren.

All Wales return to Wale either physically or spiritually after they die.

It’s one of the main reasons that people understood the importance of opening the airport to bring Pili Tiro’s body home last December.

God, education, family and Wale community are the pillars.

“Look after your people,” said Aleti Taunga, “they are the ones that will bury you.”

Wales often ask me, “Will you be buried here?” The answer is yes.

“I see Wale every evening,” Johnny Frisbie told me when I last saw her in Hawaii.

“I see it every evening, the blue lagoon and the three islets.”

Wherever you go, Wale is always with you. Now 82, Johnny Frisbie still writes about Wale, her memories and her own family legacy.

In some ways, Wale is easier to inhabit in memory, in dreamtime and in story than in reality. Johnny Frisbie would like to come back to Wale but as she once said to me, “it will cost the great strength of my soul”.

Back when I worked as a clinical psychologist in my other life on the “outside,” we often used narrative therapy—a kind of therapy that came from Western psychologists who studied with Maori taunga.

The point of narrative therapy is to help someone make a coherent narrative of their life.

In many ways my own journey back to Wale has been that — making a coherent narrative of my own life, the “Western” way and the “Wale” way, and of learning from this unique place. It has been a journey back in time. I have come to discover that the truth of the story doesn’t matter as much as the stories we tell, but the best story is an authentic and lasting story.

Wale has made me less naïve, less stubborn, and more in flow with the universe.

There will always be more to learn, including patience and stillness. “Go slowly, go correctly,” said a friend from Penryhn.

With its new teachers and new principal, Niua School remains as busy as ever with newly elected prefects.

Under the support of the Cook Islands Tertiary Training Institute, the Ministry of Education and the community, we are restarting after-school hours at Niua School a smaller version than originally envisioned of the Te Ulu o Te Watu Learning Centre lovingly called the “University of Pukapuka” to honour the knowledge already here.

Like the very successful Niua School Lifeskills Program, it includes vaka building, trades, English and computers and valuing the rich Polynesian knowledge of land and sea that the children already have generation after generation.

The Lopa, Tamawine o Mataaliki are organising their own youth programme for the year.

Wales always have the great gift of knowing how to organise events, celebrations, fundraise, share, and live in the moment, with a different sense of time and with the rhythms of the tides.

As many Wales do, the key is to be firmly grounded and integrate the best of both worlds.

People often ask me, “How long will you stay in Wale?” In typical Wale fashion, the answer is “it depends.”

As for many Wales who have lived a long time on the “outside”, the physical realities of lack of reliable transport, adequate medical supplies, education access, responsibilities to family on the “outside,” and the differences between daytime and night time Wale can make it a challenge. On the other hand, the so-called isolation is also what has kept Wale so special, unique, connected to the land and lasting beyond time.

Like all Wales do, I will find ways to stay connected across this sea of islands with work, love and stories. It’s a place worth looking after.

In the evenings, we all sit on the porch and talk story and then I go into the house, light some candles and sit at the desk to write about Wale, daily life and the strengths of this unique place that connects Eastern and Western Polynesia. This includes going back through my father’s field notes, legends, makos, stories from Wales and Johnny’s writings to eventually long-term, very slowly over the course of years, write A New Book of Pukapuka.

It is only my perspective of daily life and the stories, characters and history of this place. It’s a legend of a place, like Star Wars with its own Darth Vaders and Jedi masters and Yodas and Obi-Wan Kenobis.

More than a few Pukapukans have called me a mayakitanga or a sacred maid, one that never marries but is protected, acting as a prestige symbol for the lineage of a place. I have often been treated as such and am grateful for being given this gift of belonging and of connection to this timeless place.

In the book the Life of Pi, the main character says it is a story that will make you believe in God. It is not necessarily the true story, but it’s the better story, the one that has made me believe in God.

Wales are nothing if not survivors. The story goes that they are descended from 14 people after a cyclone, and cyclone Percy in 2006 saw about half the population leave. But everyone always returns. Wale, or home, will always exist far beyond time with its villages, motu system, yolongas, politics, gossip, freedom, festivities, characters, angi angi te matangi tangi, kai kavas, deep love, memories, cyclones, tall tales, humour, knowledge of the land and sea, living in the present, storytelling, traumas, Western influences (television and alcohol), and of course, heaps of prayer and play. It is a real place and a heartbreakingly human place all the more intense because 450 of us live on the small coral atoll. It is a place to always hold deep in your heart and return to physically and spiritually—te pito o te wenua.