Pukapuka: The ride of the young men 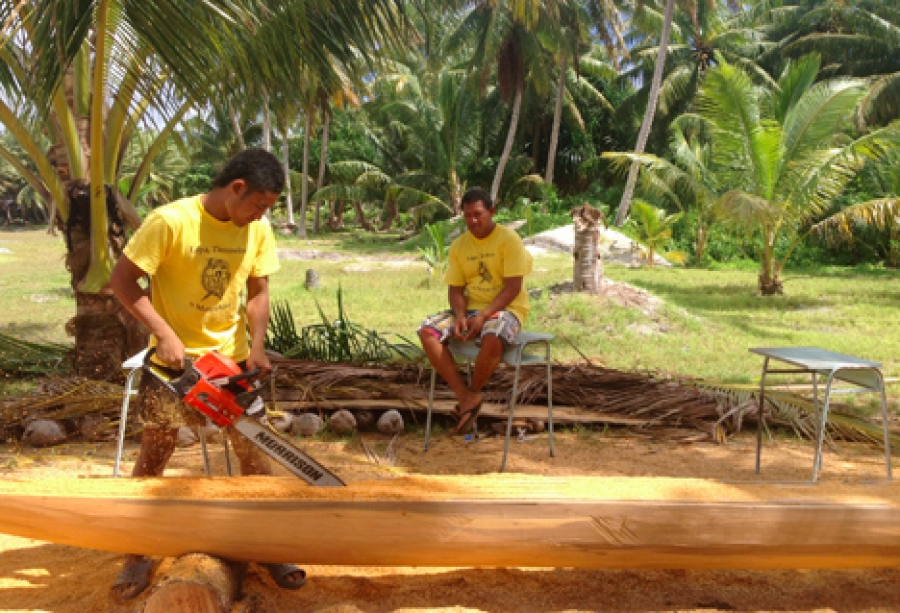 Using modern equipment along with old school knowledge – youth on Pukapuka are enjoying learning to make their own vaka. 14060646

Dr Amelia Hokule’a Borofsky, who grew up in Pukapuka and Hawai’i, is giving back to her childhood atoll and community.

She originally returned to the northern group island to learn, teach and write. After almost a year away on the ‘outside’ – she is now back in Wale where she continues to document daily life and helping the community. She holds her doctorate in community and cross-cultural psychology. She is a regular contributor to CINews and the Atlantic Magazine online and today she shares the efforts being made in reviving the traditional craft of vaka building Wale style.

At 17, Pukapuka resident Marurai Marurai made his first fishing vaka.

“I grew up watching my father make vakas,” he said, “when my father thought I was ready, he allowed me to make one, watching and correcting me.”

Most island learning happened “informally” with children growing up watching their elders.

Often when asked “how did you learn to fish or to play cards or to plant taro?”

The answer is “I just learned.”

While the adults play toto on the sandy roads, the game of throwing sticks, the children watch and practice on the side lines.

“The problem now,” said Marurai, “is that no one has been making vakas on the island for 20 years so none of the younger generation have grown up watching them being made.”

As part of the Te Ulu o Te Watu Learning Centre programmes, under the Cook Islands Tertiary Training Institute, Ministry of Education, the art of vaka-making for the youth is returning in a more formal setting as a training program.

The students will earn a CITTI Vaka Making Certificate and, eventually, the goal is to tie courses to the Ministry of Education’s new NZQA Cook Islands traditional knowledge and practice standards.

“All the older men know how to do it,” said Marurai, the island’s Government Representative and volunteer vaka-making and woodworking tutor.

“I am teaching them,” said Marurai, “because it’s the next generation that doesn’t know and soon no one will know how to make the Pukapukan vaka.”

His son, Kuo Marurai, said “we don’t know because we don’t need to know. We have the outboard motors now and the aluminium boats. There is no practical purpose to learning to make the vaka now. There’s not a lot of wood or need.”

There may not be the same need today, but like all Polynesians, Pukapuka has a long history of making vaka not only for fishing and racing, but for voyaging.

In his book, Voyagers, Herb Kane drew a rendition of the Pukapukan sailing vaka one of the many prototypes for the Hawaiian double hulled voyaging canoe Hokule’a.

During the great migrations throughout Polynesia, Pukapuka was a known as a stopping point.

Dr Pila Wilson from University of Hawai’i, Hilo said that the Pukapukan language is uniquely influenced by East Polynesian languages because “it was uniquely suited as a site from which to sail on to Samoa and Tonga in later contacts between East Polynesia and West Polynesia. In addition, a Japanese archaeological survey of Pukapuka showed that the oldest carbon dating records east of Samoa and Tonga were found in Pukapuka from the second or third centuries BC.

Another remarkable discovery was dog bones dated to 2310 BC.

The report reads: “Dogs were apparently unknown among the Pukapukan until 1850AD, and they had no words for it in their language.” According to the analysis by Dr Shigehara, he suggests that the dog bones are comparable to those found in Moorea, Society Islands and Australia. In addition, according to some legends. Pukapukans reached Hawai’i, which was not called Hawai’i at the time, and had been to Hawai’i and several other volcanic islands north-north-east (the Wakalua wind direction) over the years including the naming of another Pukapuka in the Tuamotus, as well as possibly leading the Marquesans to Hawai’i. All this is to say, that Pukapukans clearly had a long history of navigation throughout the Pacific. As Hokule’a and Hikianalia make their way to Tahiti and around the world, it is hoped that they will also stop in Pukapuka to make homage to the voyaging past and the ride of the young men.

Beniamina Williams, who comes from a vaka-making family and continues to make model vakas as gifts said, “The vaka making style in Pukapuka is unique. Everyone used to know how to make them for fishing.”

“Most of the really old masters,” said Pio Lavalua, chairman of the Kau Wo Wolo, “live in New Zealand or have passed away.” “In my time,” said Marurai, “everyone had a vaka because they needed it to fish, to travel to the motus and for vaka racing during the sports.”

“Once I made my first vaka,” said Marurai, “I was a man and could go out on my own boat to fish.” Today on Pukapuka, there’s only about five to six fishing vaka at any given time on the island.

They only get used, however, when the petrol runs out for the aluminium boats or for fishing close to shore.

Those still on the island could remember vaka racing as far back as the 1930s and 40s.

Marurai remembers saying, “In the 70s and 80s, we had active vaka racing across the lagoon and from the passageway at Aalaipalaoa all the way to Yato.

We had women, men’s and individual racing. We had eight, seven and six person-racing with all the villages competing against each other.”

Once the vakas rotted over time, no new ones were made until 1990 when the villages resurrected it again. From about 1990 to 2002, each village had five vakas for racing during the annual village sports competition.

Since Cyclone Percy in 2006, half the population migrated and the wood became scarce.

“My dream,” said Marurai, “is to teach the youth to make three vakas – one for each village. The youth of each village will train and then we will have vaka village challenges again.”

Peter Lavalua, 18, who shows up early to the vaka making course said, “this style of vaka making has been gone for many years so it’s good to show people we still have our culture.”

“Down in Rarotonga,” he continued, “I used to go hang out at Mike Tavioni’s workshop and just watch and help out. His is a different style. Our one is from ancient times.”

The process of making this vaka began with a request to Ngake Village for the very precious old wetau, akanava and puapua trunks. Once a price was agreed upon, all the men of Ngake Village went out to Motu Ko to choose the trunks.

“I can see the vaka when we choose the wood,” said Marurai Marurai. The Ngake men then put the trunks on the barge and brought them to the back side of Niua School hall.

“What would have taken four months to teach them how to make will now take three weeks thanks to the tools we have from CITTI,” said Marurai Marurai. Last year, the tertiary woodworking course made over 40 model vakas donated to Niua School, over 30 kumete and small paddles. Most items were gifted and some sold to the visiting Picton Castle, providing a small income for the underemployed on-island youth. It is hoped that a museum will purchase this unique vaka, and others will have an interest in the woodworking crafts from Pukapuka.

“This younger generation is starting to see the value of our woodworking arts,” said Marurai Marurai. When these lopa finish the three-man vaka, they will take it out for a long ride.