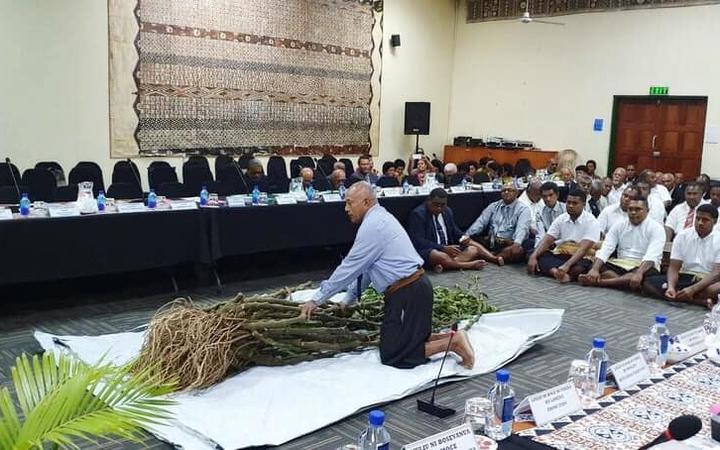 The opening of the Lau Provincial Council meeting. Photo: Supplied

Thirteen chiefs from Fiji's Lau Province are pleading with the government to stop the movement of commercial boats to the outer islands to protect their people from Covid-19.

This comes after reports the virus has reached the northern and eastern divisions in the country.

The Covid-19 outbreak ,which began in April this year, has been centred in the central and western divisions.

More than 19,097 active cases are in isolation and the death toll is at 438 with 436 of them occurring duing the current outbreak.

The Health Ministry last weekend confirmed 131 new infections on the remote island of Kadavu in the country's eastern division and three in Nabouwalu, Bua in the north.

Chair of the Bose Ni Vanua Ko , Ratu Josefa Cinavilakeba, said the movement of boats to the group placed a major risk in the lives of the islanders.

The Lau Group comprises some 60 islands and has a population of 9602, making it the third-least populous province in Fiji.

"We are making this call out of our real concern for the safety and health of our people in Lau, given the increasing number of infections and deaths in Viti Levu from Covid-19," he said in the letter.

"We are also concerned about reports out of Vanuabalavu where a ship that called on the island had seven out of the 11 crew members testing positive for Covid-19 upon their return to Suva.

"We have also been advised that Moala had reported a case of interest, related to a sick member of a ship crew that recently called on the island," wrote Ratu Josefa.

Ratu Josefa said that as leaders of the community, the chiefs had responsibilities towards their people and one was to ensure they were safe during this health crisis.

In his letter, Ratu Josefa told the prime minister that the two subdivisional hospitals and nursing stations in Lau did not have the capacity to treat or handle any Covid-related case.

"As vaccinations begin to roll out in Vanuabalavu, Cicia and Moala, we plead with your good self sir, to order your Minister of Trade, Tourism and Transport to urgently implement measures to lockdown the entire province of Lau for one month and this encompasses cargo, fishing and passenger boats as well as super-yachts," he said.

The Permanent Secretary for the Office of the Prime Minister, Yogesh Karan, said instructions had been issued to the Transport Ministry over the matter.