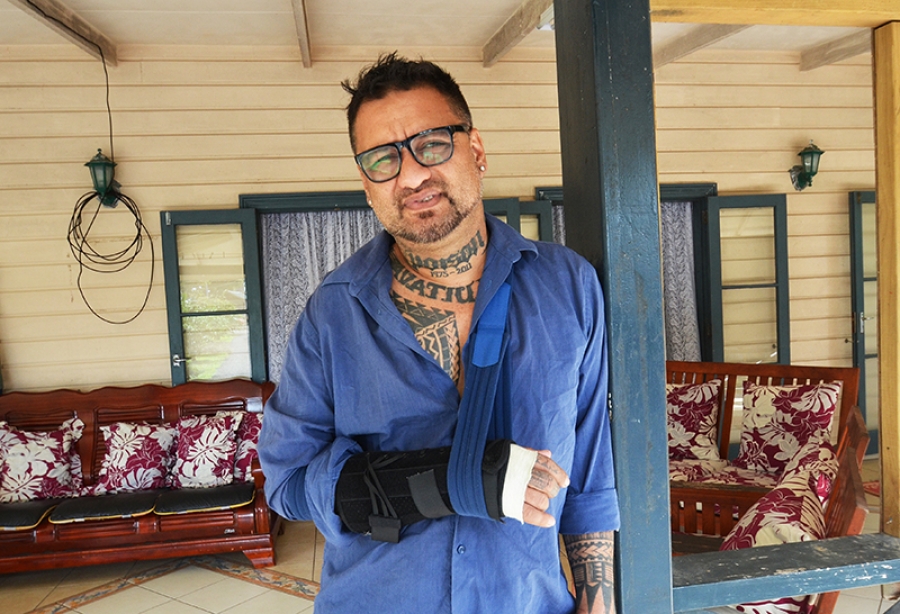 Albert Nicholas at his family house in Avatiu after a previous injury. 18061107

He was discharged and returned to Parliament for the one-day sitting this week.

Nicholas was the passenger of a rental car that smashed into a power pole on Nikao main road.

Repeat offender Wilfred Dauvois, who was at the wheel, appeared in court accused of driving while disqualified.

He had not been aware of Dauvois’ suspended license or his medical condition, he said.

Dauvois is said to have had an epileptic seizure behind the wheel, and crashed into a number of vehicles.

However further analysis on him revealed serious illnesses that prompted the Health ministry to refer Dauvois to an Auckland hospital, Nicholas said.

Dauvois’ lawyer Norman George confirmed this: “We did not need any approval from anyone to take a very sick Wilfred Dauvois in an emergency referral. He has been diagnosed with terminal cancer at Middlemore Hospital.”

Nicholas said he was disappointed with the agencies who knew about Dauvois’ conditions but did not act to ensure his safety.

“Up until that day, I didn’t know about his medical condition. I let him drive because he drives all the time, I didn’t know he was suspended from driving.

“I said to them ‘are you guys ready for this guy to kill someone before doing something about it’. It could have been me that day.”

Nicholas said Dauvois was helping him in his building project in exchange for a place to stay.

On the day of accident, he took Dauvois to hospital after the latter complained about not feeling too well. But they decided to return home without seeing a doctor because the hospital was full and busy.

“I asked him if we can come back later in the evening when the hospital is free and he agreed. I let him drive back because he didn’t tell me that he was suspended, and I have always seen him driving around.”

Nicholas said he offered Dauvois a place to stay after finding him at Punanga Nui Market sleeping on a Sunday morning with his two suitcases.

“He had no place to stay so I gave him a place in exchange for some work with the two units I’m building at my place.”