‘We conquered the cold and paddled to victory in our hearts’ 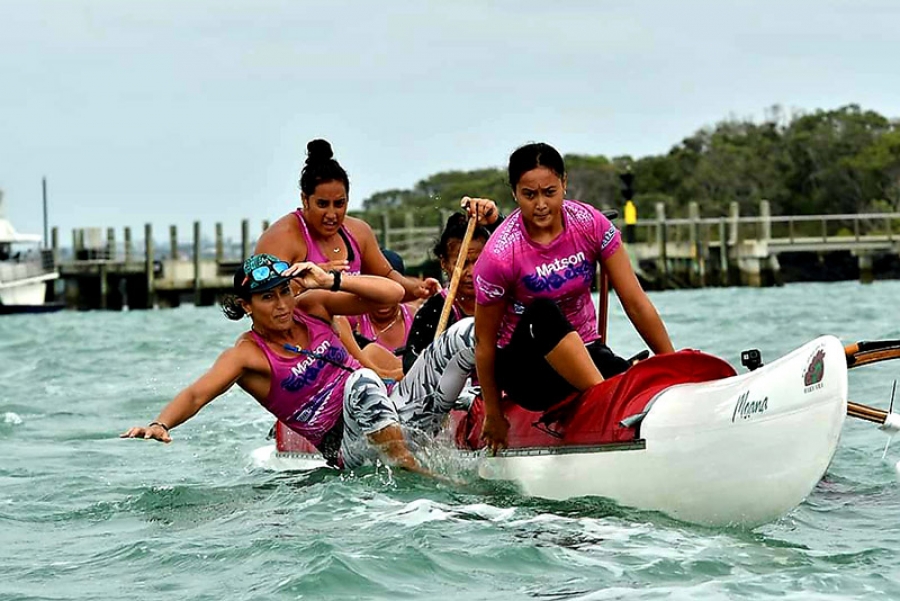 For the first Cook Islands women’s team to compete in Takapuna’s 42km relay, the other paddlers weren’t their real opponents. It was the cold.

Paddlers have returned home to the warmer waters of Rarotonga, telling of the freezing New Zealand waters they had to battle to give Cook Islands its first ever placing in the tough Takapuna beach relay.

And despite the extreme weather conditions, the strong crew placed an impressive third out of eight women’s teams in the 42km race.

Conditions were very rough heading out from north Auckland’s Takapuna beach, and around Rangitoto, Motutapu and Rakino islands. The team made it back to Takapuna in 4 hours, 29 minutes and 17 seconds – placing ahead of the five mixed teams.

Coach and paddler Serena Hunter said the water was far colder than they were used to. “But everyone stepped up and paddled so hard and so well, you could see and feel so much heart in that race, it was so much a team effort, I was so proud of our ladies.”

Their changeovers were also good, after some shaky changes in practice. “On the day everyone just seemed to amp up 110 per cent to give it everything.”

Battling the icy cold and intense shivers, the women continued to paddle on.

“Despite the tough conditions, our ladies were so strong, I was so impressed, even towards the last 5km or so, we saw we were catching up with another women’s crew so just hammered down and managed to overtake them to come in third placing.

“We were ecstatic with our race, and with our result, we had a great battle through the race.”

Hunter credits the experience, commitment and trust between the crew: “It shone through as everyone stepped up in the race and took everything in their stride.”

Mylan Lane, the eldest of the crew, said their efforts were focused, positive and humble. “The energy from each paddler was amazing.

“For us locals, the toughest part was the freezing cold Kiwi waters, but we mentally blocked out the conditions and steely focused on the race.

“We conquered the cold and paddled to victory in our hearts. Coming third in this event was a blessing, as we pushed ourselves right throughout the race without giving in an inch.”

Lane said it was great to have two local supporters on the safety boat, Raymond Lambert and Allen Sullivan – the “silver foxes” were full of energy and kept on the encouragement.

She commended Hunter for her dedication to the crew. “She is the most positive and humble coach I have known through the years of paddling.”

Proving the women were not to be deterred from the elements of that race, the next day Hunter, Vaea Melvin, Emilene Taulu and Samantha Puati-Ellison stepped up to compete in the 24km singles relay.

Given they had done very little training on the singles, Hunter was very impressed with the girls doing the back to back especially after Saturdays tough race.

Hunter has competed in the race twice before in the winning Manus and Jemimaz team – but it was extra special to return to the race with a Cook Islands crew. “It was pretty special, and we all just loved the whole experience,” said Hunter.