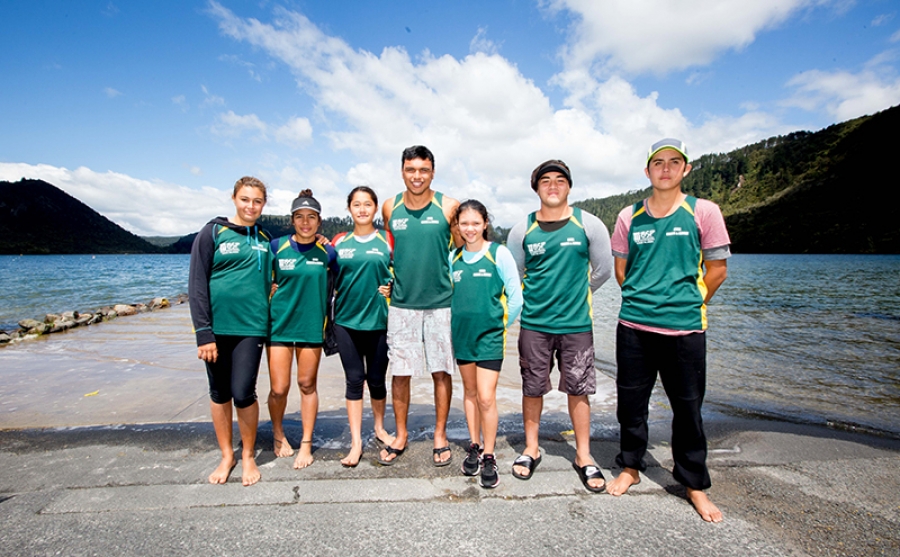 Genesis Ngatikao is one of only two kayakers her own age in the entire Cook Islands, while the only suitable training waters she has is a 200m stretch of Rarotonga lagoon, accessible only at high tide.

So it was with a certain wide-eyed excitement the 13-year-old joined an eight-strong Cook Islands team at Canoe Racing New Zealand’s first event of the season, the Blue Lakes regatta, at Lake Tikitapu in Rotorua over the weekend.

That excitement went up several levels on the first day, meanwhile, when she found herself in a heat alongside under-23 world champion Aimee Fisher, with CRNZ introducing divisional races to give age-groupers the chance to paddle with high performance stars.

Ngatikao’s dream day was completed soon after, when she joined Olympian Fisher and two other young paddlers in a novelty K4 race.

“It was so fun - she was so good and I liked trying to paddle in time with her,” Ngatikao said. “She made us do good strokes and I was just concentrating on keeping my back straight when I was paddling.”

It was a similar story for Waitara 14-year-old Scarlett Old, who found herself in a boat with another Olympian, Kayla Imrie, alongside fellow juniors Kristian Marshall (Eastern Bay) and Mana’s Liam McVicar.

“It was fun - lots of splashes and it went really fast,” Old, who has only been paddling kayaks for two months, said. “I do surf lifesaving at East End so we started a bit of kayak training to go with that and I ended up really enjoying it so I’ve kept it going.”

While Fisher dominated the K1 200m finals later in the day, Imrie was still easing her way back into training after New Zealand’s successful world championship tilt in August, where the pair were in the bronze-winning K4 team. Instead, Imrie busied herself in an IRB, providing event safety support and a spot of on-water coaching while she was at it.

Other members of the national high performance squad were also getting their season off to a fast start, with North Shore’s Karl McMurtrie powering home to win the K1 200m men’s division A final in 37.30secs, just 0.25secs ahead of Kurtis Imrie (Mana), with Bay of Plenty’s Taris Harker third in 37.55.

The Cook Islands contingent, meanwhile, had a successful day with coach Roly Rolleston delighted by the competition his squad received.

“Obviously we can race against each other back in the Cooks but coming out and racing here was too good an opportunity to pass up,” he said.

The Cook Islands team may look at attending another overseas event in February, deciding between the New Zealand national championships at Lake Karapiro or the Oceania championships in Australia.