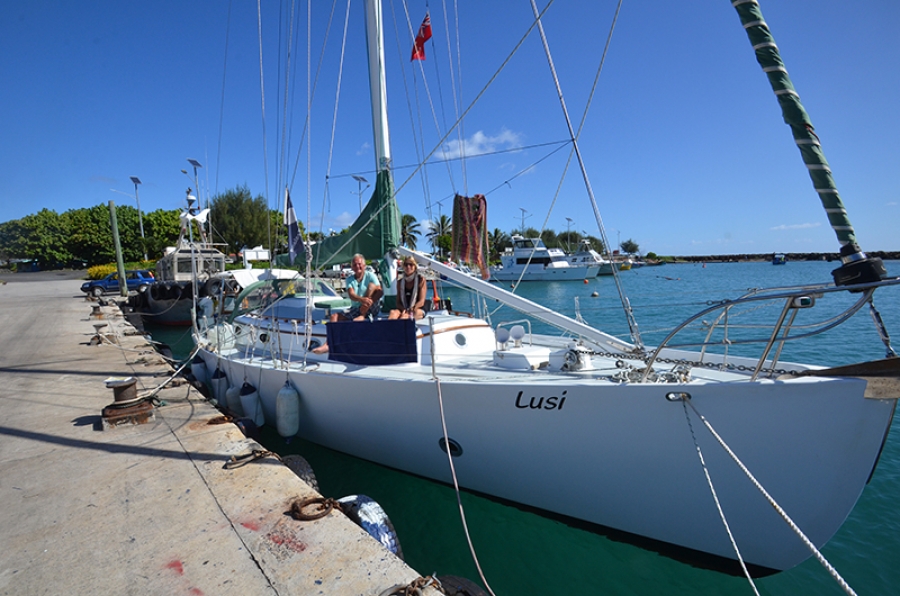 Kiwi yachties Mike George and Sue Harvey thought they'd see if any supplies needed transporting to Suwarrow before making their long-planned trip to the northern-group island.

After spending 10 days in Rarotonga, New Zealand yachties Mike George and Sue Harvey were headed north to Suwarrow yesterday, carrying with them a load of general stores and gardening tools for National Environment Service rangers Harry Papai and John Samuel – along with a box of beers courtesy of Te Ipukarea Society.

“A thank-you gift from team TIS to the rangers!” said technical director Kelvin Passfield, acknowledging the hospitality of Papai and Samuel during the society’s recent rat-eradication mission to Suwarrow last month.

“We were very appreciative of the support that the NES rangers – and in particular Harry – gave to us in the time we were there,” Passfield told CINews earlier, noting that the pair had shared both their accommodation and freshwater supply with the TIS team during their month-long stay on the island.

Also appreciated is Mike and Sue’s kind offer to transport the beer and other slightly more essential supplies north to Suwarrow.

A few days after arriving in Rarotonga, the Kiwi couple – who have been planning their once-in-a-lifetime trip to Suwarrow for a while – called in to the NES booth at the Maritime Cook Islands career expo last Monday.

“When we were approaching the island I said, ‘Geez, there’ll be something that they want up there – we should go and see if there’s anything they want,” said Mike. “I was thinking of mail or whatever.

“So when they had the expo on last Monday Sue went up and talked to the environmental people and they said, ‘Yes, yes – we really need some stuff delivered’.”

The NES delivery includes three “quite heavy” boxes of tinned goods, gardening tools and a battery for the rangers’ solar panels, as well as other supplies.

Added to this are some gifts of food that Mike and Sue have purchased themselves for the rangers – frozen sausage rolls, cabbages, cucumbers and a pumpkin.

“We’re also taking extra petrol so they can take us out for a fish,” said Mike.

Based in the New Zealand town of Kaikohe in the Far North, Mike and Sue describe themselves as “retired” but have a little storage shed business that they still operate.

Mike built their 42-foot yacht Lusi – named after a cyclone that swept through Vanuatu, Fiji and New Zealand in March 2014 – three years ago and they’ve spent most of their time sailing her ever since, clocking up some 33,000 miles in the process.