When in Mitiaro, you do as they do 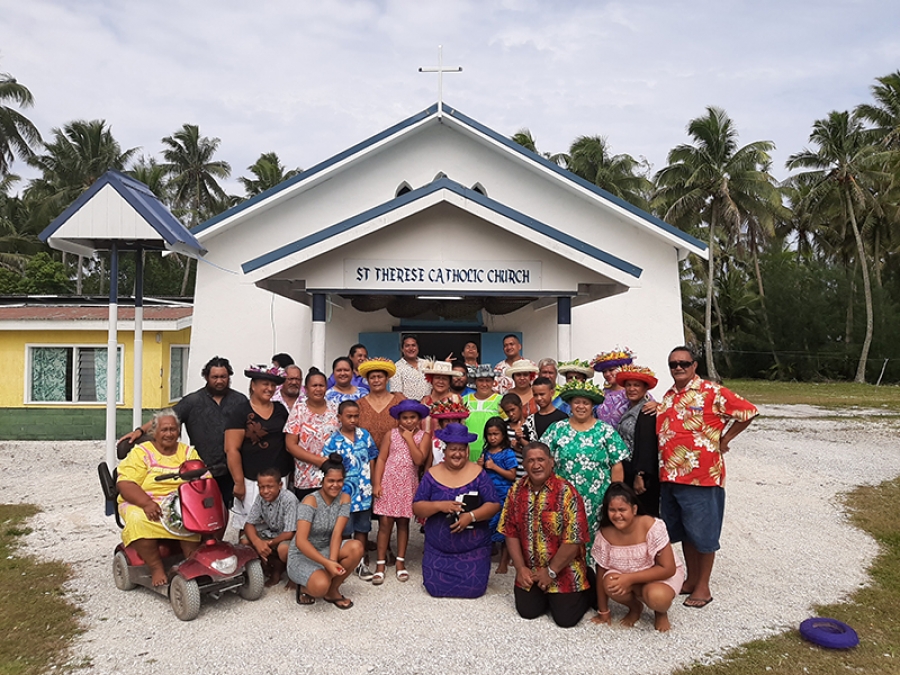 Mitiaro also known as Nukuroa, is peaceful and precious; like going back in time. Melina Etches shares her experience after her first ever visit to the island.

Mitiaro part of the Nga-Pu-Toru island group, the untouched coral atoll with its stark sandy roads and lush greenery has population of approximately 130.

It is very quiet.

There are no dogs barking, speeding motor vehicles or any kind of loud machinery.

Having not heard a bark and assuming dogs were banned from the island, I was startled to learn that there actually is a resident dog on the island called Barbush, yes Barbush.

I was told Barbush was brought to the island in 2017 in an attempt to frighten the wild pigs from gardens and plantations.

However, Barbush was more frightened of the pigs and refused to chase them away, he merely just watched the roaming pigs from the safety of the veranda. Barbush lives quietly and comfortably (he has his own bed) with the mayor and his family.

Although the residential population is small, the warm gentleness of the people, especially the mamas, is embracing, like you are a part of them and they will take care of you.

And the sense of pride is admirable.

The community is very much steeped in its traditional ways.

We were advised, “when you are here in Mitiaro, we have our customs, you do as we do; how you are, where you are from, you leave that there”.

Visiting the Pa Enua is about respect. Respect for their rules, their protocols, their dress code.

If you cannot humble yourself and pay attention to their way of life, stay home.

Women are not to wear shorts or tights through the village on a Sunday (you may do so at home); when attending any function, women are expected to wear a skirt or a dress, not shorts.

I and the women in our group heeded the dress code with no qualms, we were pleased to do so.

Sundays are a no for swimming, unless you are given permission.

And when invited to an island function, you are expected to turn up, it doesn’t matter what else you want to do you - turn up because your absence is noticed.

Mitiaro has a strong Christian faith, and has three churches, the Cook Islands Christian Church, the Catholic Church and the Assembly of God.

As with any of the Pa Enua, it is admirable that we have people who choose to stay, inhabit and nurture these islands because without them who knows what would happen to these islands?

Mitiaro is flat, driving through the inland and outer roads all you see is ara (pandanus) that the island is well known for in the eis, and the freshwater lakes Rotonui (big lake) and Toto Iti (small lake) make up a large part of the island.

It has a popular underground water reserves, including Vai Nauri – a deep clear cool lake, reputed to have healing powers and Te Pitakare, an underground freshwater cavern.

I had an opportunity to talk to the local residents while on the island and here are their stories.

Mama Rouru Ina Tati Temou Raeputa Tangatapoto was born on the island of Mauke in September 1940. As a baby she was picked up by her grandmother and taken to Mitiaro where she was raised and has lived ever since.

Growing up as a young girl she recalls her grandfather saying, “don’t ever leave our island and settle somewhere else, yes go on a holiday, but always return here to stay, this is where you belong.”

She heeded to that advice.

“I always remember what my grandparents said to me, that’s why I’m still here, I love this place, this is my home.”

Rouru met her husband on the island and together they raised their 11 children.

Since he passed on, she continues to live alone in her large family and is fit and able to look after herself. One of her grandsons Pati Tati lives on the island and pops in to visit her.

The houses in the centre of the village stand closely to each other, so the neighbourhood is closely knit and people check on each other daily.

Rouru doesn’t get bored or lonely, there are always things to do and plenty of time to rest. She says, “you do what you do and then rest.”

When a tere (visiting group) arrives to the island, “the community just gets together and we make food for our guests, it is our way, our way of giving.”

Rouru was present at all the feasts and events the island provided for Miss Oceania Cook Islands Tajiya Sahay’s visit.

Born and brought up on Mitiaro, Julian Aupini Junior, the island’s tumu korero, taunga and speaker for the Ui Ariki, is 55-years-old and is content with his life on the island.

He briefly lived on Rarotonga from 1979 in 1982 when he attended Tereora college; soon after he returned to Mitiaro.

Not many people have chosen to stay and live on Mitiaro.

Junior says the population has decreased because people move to Rarotonga for further education, and some families end up staying there to work, or move to New Zealand.

Maybe for the younger generations, the island can be too restrictive, he adds.

“We are still very strong in our “peu tupuna” (traditional ways).”

When you are on Mitiaro, you do as we do; what you do where you are from, leave it there, he smiles.

Transportation of goods is an ongoing issue for the island and the people are very dependent on the Tapi Taio’s shipping service.

The boat may arrive to the island once every two months, depending on the cargo or the weather.

Although there was no food in the shop, but you can still survive here because “there is the food from the land and food from the sea”, says Junior.

Junior’s parents are Papa Moko and Mama Patu Irangi, he is married to Cecelia Teei (nee Framhein), and they have three children.