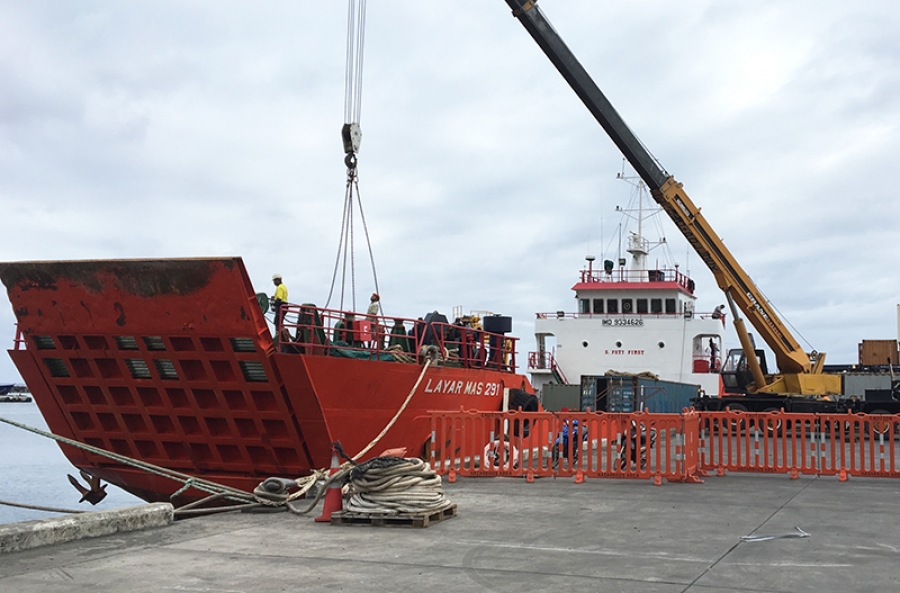 The Layar Mas took on cargo for the northern islands yesterday, including a load of water for Penryhn which has been suff ering a shortage for some time. 1809132

The Ministry of Culture failed to take advantage of Taio Shipping Services’ final subsidised voyage for the year to the northern islands, opting instead to pay an extra $200,000 for a load of fuel and dangerous goods to be transported on the Cook Islands Towage barge Layar Mas, says company owner Tapi Taio.

As a result of the ministry’s decision, Taio Shipping Service’s subsidised voyage travelled north with “next to no cargo at all”. Several airline fuel tanks made up the bulk of cargo, leaving his company many thousands of dollars out of pocket, Taio says.

It also left Pukapuka residents allegedly having to pay $80 to $100 for single cartons of chicken, when Taio says his company could have landed them for just $11 sea freight under the subsidy.

Taio told CINews yesterday that all cargo belonging to northern islands residents who came to Rarotonga for Te Maeva Nui was originally to have been delivered immediately after the cultural festival finished.

All of Te Maeva Nui passengers and some of their cargo had been delivered by “foreign” passenger and cargo ships, the Tahitian Tahiti Nui and the Tuvaluan ship Nivaga III, leaving a substantial amount of cargo on the wharf.

“All of the excess cargo for the northern group islands was contracted by charter to Cook Islands Towage, using their barge,” says Taio.

“Unfortunately the barge could not transport all the excess cargo on its first chartered trip to the north, which is why a remaining 40-50 tons of general and dangerous goods cargo ended up waiting in the cargo shed for another three or four weeks.”

Taio says there had been an option available to the Ministry of Culture to transport this cargo for a special price using both of the Taio Shipping Service ships, at a time when the Layar Mas was away up north.

He says the Lady Moana could have loaded all Excel cargo for Penrhyn, Rakahanga and Manihiki and would have sailed to the islands in that order.

The Maungaroa II could then have delivered all remaining Manihiki cargo, plus what little cargo was available for Pukapuka, Nassau and Palmerston.

“So there was an opportunity to transport all excess Te Maeva Nui cargo north and to sail through all the islands of the north under the subsidy banner.

“But this option was never used and in the end to achieve results for government, Lady Moana fulfilled its contract and sailed to all of the northern group islands with little cargo on board to complete the subsidy trail.

“Taio Shipping made a loss of $10,000 on this voyage – and the government is paying out an extra $200,000 to have the leftover cargo delivered. They just don’t seem to care about the extra cost. It doesn’t add up.

“It seems to me that the government is favouring one company over another. This should not be happening.”

Taio says he is happy for the Cook Islands people’s free cargo delivery to be paid by government.

“But where is the freedom of a fair paying field between shipping operators?” he asked.

Taio, who has operated a shipping service to the outer islands for 23 years, says he still has faith in the system that in the end, the government will do the right thing.

Meanwhile his son, Eugene noted that yesterday, still more cargo was still being delivered to the wharf for loading on to the Layar Mas.

“It looks as though the government’s offer of free cargo shipping for northern island residents is still continuing, even though Te Maeva Nui finished weeks ago.”

Taio Shipping did not have the capacity to carry the water, he said.