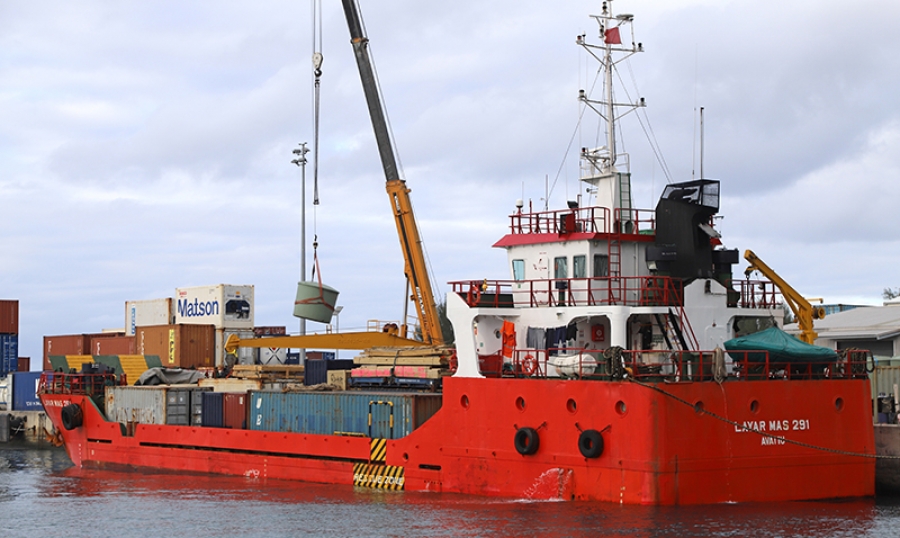 A water tank being loaded on to the Layar Mas yesterday afternoon. The vessel is carrying fuel, dangerous goods and other cargo to the northern islands, and has also taken on 100,000 litres of drinking water for Penrhyn. 18091452

Government is aware and wary of the risk that the northern group islands face with below normal rainfall and drought conditions forecast over the next three months.

According to a weather forecast report from New Zealand’s National Institute of Water and Atmospheric Research (NIWA), the northern Cook Islands is at risk of high “water stress” over the next three months.

The report also said the islands in the northern group had received low rainfall over the past few months and dry conditions are forecast to continue.

Penrhyn which has faced the brunt of the dry spell since June, has been receiving shipments of drinking water from Rarotonga.

The third shipment of 100,000 litres of drinking water was sent to the island this week to provide relief to residents on the most northerly of the Cook Islands in the coming weeks.

“The northern islands are forecast to have below normal rainfall and drought conditions over September to November,” confirmed Office of the Prime Minister chief of staff Bredina Drollet.

She said the government had plans in place to provide relief from the impending dry spell, if needed, to those on the northern group islands.

“Community water tank repairs have commenced (funded by GIZ) and there are water resource advisors on Penrhyn overseeing the project. (We) are in the process of repairing community water tanks before proceeding on to Nassau and Palmerston,” Drollet earlier said.

“Consideration is being given to use of acquifers as a potential small scale desalination solution that could be replicated on each of the northern islands.”

Some assessment of potential water galleries was being undertaken, but Drollet said as these islands were low-lying atolls, the fresh water lens was shallow and there would always be risk of sea water intrusion, particularly if the galleries were relied on as a main source of water.

The NIWA report said atmospheric indicators became aligned with oceanic indicators during August, for a climate system that is gradually moving in the direction of El Niño.

This is consistent with the consensus from international models, which forecast a transition toward El Niño over the next three-month period (65 per cent chance over September – November 2018). The probability for El Niño conditions being established reaches a peak during early 2019, with a 78 per cent chance for El Niño conditions over March-May 2019.

The primary effect of El Nino is the alteration of weather patterns including temperature changes, precipitation changes and storm track changes and intensity.

The secondary effects of El Nino include fires, drought, and flooding.