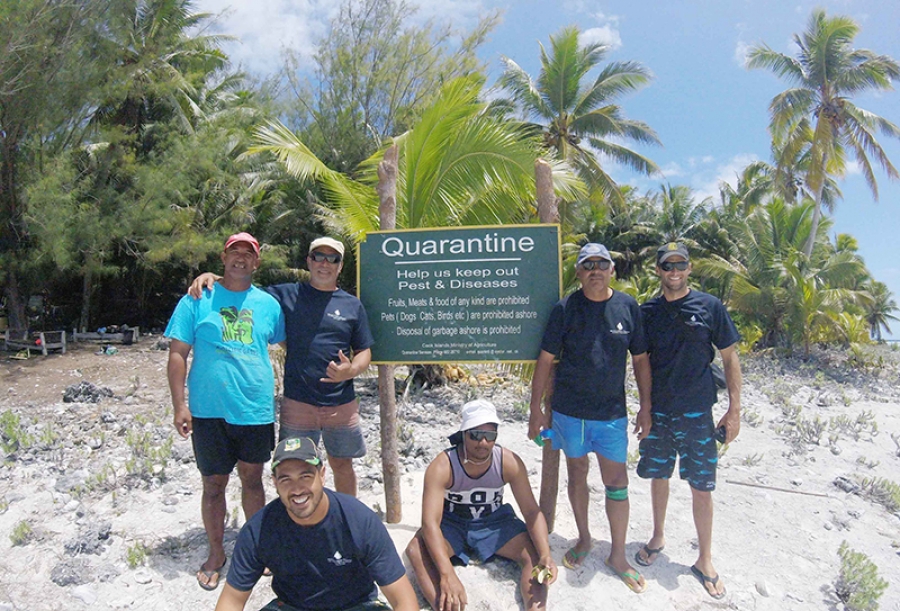 A team of marine scientists and local fisheries officers are conducting marine surveys and collecting vital baseline data in the outer islands.

The group of six spent the last week on Manuae. They are now on Aitutaki and will return to Rarotonga before conducting more surveys.

The work is part of activities organised under the Cook Islands Ridge to Reef Project. Manuae is not the first island to be surveyed - the Ministry of Marine Resources (MMR) recently completed the marine surveys in the lagoons surrounding Rarotonga and Aitutaki.

In a media release, the Ministry of Marine Resources said the goal was to collect baseline data across the southern group islands that would act as the basis for ongoing monitoring programmes and management decision.

The week-long mission, which began last Wednesday, is a comprehensive survey that will produce a large baseline dataset and capture the full diversity of fish, invertebrates (such as sea cucumber) and habitats present in the marine environment around Manuae

The uninhabited atoll, around 100 km south-east of Aitutaki, comprises two horse shaped islets, Manuae and Te Au O Tu, both of which are inside a barrier reef. The lagoon is 13km in size, shallow and subject to large shifting sand banks.

The island is a marine park and is an important breeding ground for seabirds and marine turtles in the Central Pacific.

Management and regulation of the islands resources have been limited. Manuae is a key location for pa’ua (giant clam) harvesting, and the current stocks of pa’ua, trochus and ariri (rough turban shell) will be surveyed as part of the assessment of the overall health and diversity of the atoll.

Manuae is also an important breeding site for turtles.

MMR says the atoll will be integrated into the Aitutaki Lagoon Management Plan.

“The overall objective of this plan is to preserve the quality of the environment of the lagoon of Aitutaki, which is linked directly to risks caused by land-based activities, lagoon use activities and environmental changes; thereby mitigating the risks to tourism, food security, public health and the environment,” the release said.

Captain James Cook sighted Manuae on September 23, 1773, the first of what is now known as the Cook Islands that he voyaged to. Cook initially named Manuae as Sandwich Island, but later changed the name to Hervey Island after the third Earl of Bristol. The name was later adapted to Hervey’s Island or Hervey’s Isle, and later applied to the entire southern group.

This name remained popular until 1824, when the islands were renamed the Cook Islands by the Russian cartographer Admiral Adam Johann Von Krusenstern.