Late, but they’re back from Suwarrow 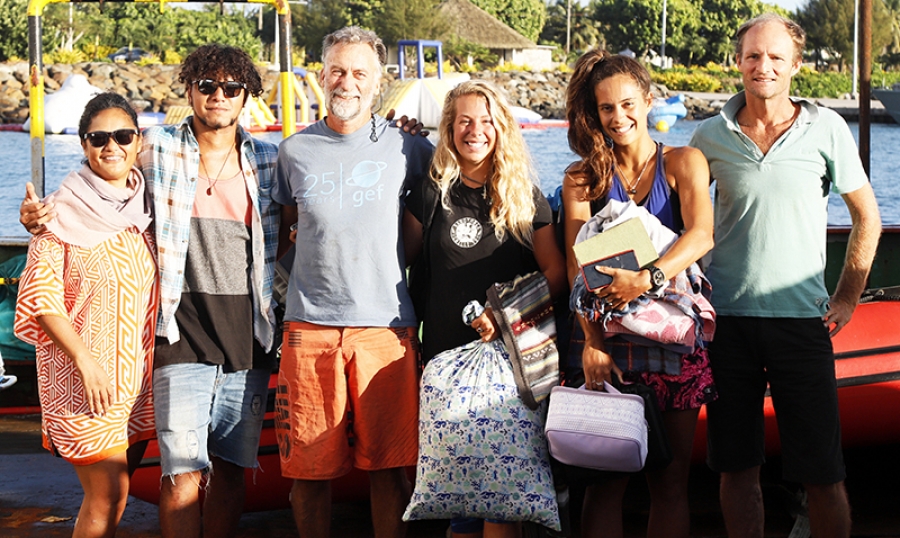 They arrived back a week later than originally planned, but Te Ipukarea Society’s Suwarrow expedition team were all smiles when the General Transport barge Layar Mas 291 delivered them to Avarua wharf bright and early at eight o’clock on Thursday morning.

While TIS technical director Kelvin Passfield was hesitant to brand the team’s main mission of fully eradicating all rats from Suwarrow a success just yet, saying they won’t know for sure for another year or two, he did say that “early indications are promising”.

Somewhat less successful were the team’s arrangements to make it back to Rarotonga, after a reported breakdown of the Cook Islands patrol boat Te Kukupa meant their scheduled boat the Lady Moana was roped into election work at the last minute and chartered by the government for a voyage to the northern group.

“So we had some forced downtime in the end, waiting for boats,” said Passfield, adding that they’d planned to have all their work done two or three days ahead of the original pick-up date on June 10.

Luckily, the General Transport barge Layar Mas 291 came to their rescue – eventually, meaning the six-member TIS team was only delayed by a week, finally leaving the island on June 17.

“In the end we were fortunate that the barge was in a position to divert on its way back from Penrhyn, although we had to wait a whole week for that to happen,” said Passfield.

It could have been worse though. Had the barge not been travelling back from Penrhyn, the team could well have ended up waiting another week for Taio Shipping’s Lady Moana to return after completing its election charter.

Perhaps more frustrating than their time spent sitting around waiting for boats was the fact that the disruption to their schedule meant TIS were unable to travel to Pukapuka and Nassau as originally planned.

“We had work to do there as well,” said Passfield. “Some of our other waste management work with the schools, weather station training with the schools, and some other potential project on coastal erosion that we were going to look into while we there. But that opportunity just went by.

“That work’s on hold now, so we’re going to have to find an alternative way to do that.”

One silver lining in the delay, however, was the fact that it allowed the TIS team more time to leave Suwarrow the same way they found it.

“We put the time to good use. We went back over to Motu Tou and camped overnight, set some traps for rats just in case, and looked for evidence of rats.

“It also gave us more time to collect some of our bits and pieces. We did our best to minimise our negative footprint on the atoll by bringing back as much rubbish as we could.”

And of course, there are far worse places in the world to be stuck than Suwarrow.

“It’s just a magic place, I think you can say that,” said Passfield. “The Cook Islands is so lucky to have a virtually uninhabited atoll like that, that they can preserve as a national park.”

Making the TIS team’s stay on Suwarrow even more magical were the National Environment Service’s two park rangers, Harry Papai and John Samuel, who will remain stationed on Suwarrow for at least another four to five months.

“We were very appreciative of the support that the NES rangers – and in particular Harry, gave to us in the time we were there,” said Passfield.

“Harry was great, he’s a great host. For us he was really very accommodating, understanding – we really put him out I’d say, by being there. It’s like we were taking over his personal space.

“A couple of us also stayed in the rangers’ house; the rest put their tents down around the place. For 10 days we were over on Motu Tou, so we were all away, but for the rest of the time we were sharing their resources.

“We put a strain on their freshwater supply – but yeah, Harry was great.”