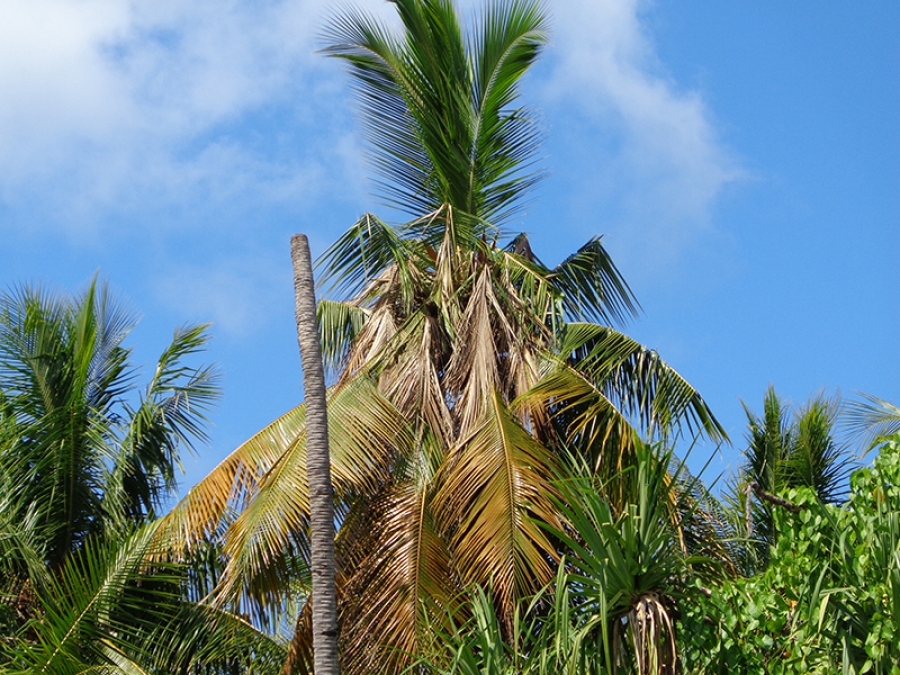 Damaged coconut leaves on the coconut tree in Penrhyn do not prove that coconut rhinoceros' beetles exist on the islands, says agriculture. 19090409

Coconut rhinoceros’ beetles do not exist in the northern islands and the Ministry of Agriculture has confirmed this.

“I had an opportunity to travel with Cook Islands Investment Corporation to reconfirm whether the pest is present or not. It is one of the worst pests on coconut trees, I was there for two days and did an extensive survey and found out that the damage is not due to the rhinoceros’ beetles,” she said.

Dr Maja explained that even though there are typical signs of pests there are other signs which she could not find that would relate to the beetle.

She said she could find holes made by beetles that would help them going into the truck of the coconut trees.

She also did not see an adult beetle, or larvae breeding site.

She said she found that there were actually rat tooth marks on the coconut tree and believes that damages to the leaves are caused by the rats when they fall off.

She added that young coconuts are actually being eaten by the rats.

She further stated that the coconut trees along the road side to the Penrhyn airport were either trimmed or cut off by knives or harvested for the use of rito/ coconut fibres for handicrafts.

Dr Maja returned on Monday and the ministry received an email from Penrhyn again stating that the rhinoceros beetle is present.

“I have looked at the evidence which make them think that the beetle is present and I reconfirm it was not rhinoceros damage. They even said that they found an egg of a beetle, but the image clearly shows a cocoon of a spider’s nest, definitely not beetle.”

She further confirmed that there is no beetle of this species in Manahiki, Rakahanga and Pukapuka, where she had the opportunity to conduct general pest and disease surveys.

Secretary for Agriculture Temarama Anguna-Kamana said it is fortunate that there is no evidence found on the coconut rhinoceros beetle on Penrhyn and the community must remain vigilant to ensure the pest never our shores.

“The coconut rhinoceros beetle is a major threat to our coconut and palm trees. Currently is is causing damages in Guam, Samoa, American Samoa and the Solomon Islands. a recent outbreak was reported in Vanuatu in June this year.”