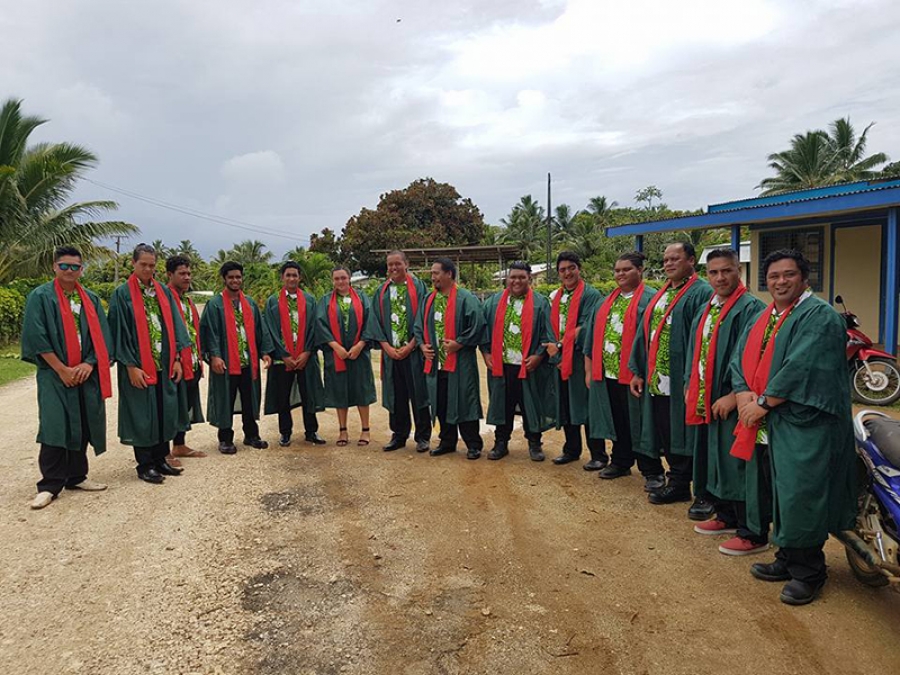 The Cook Islands Tertiary Training Institute (CITTI) held a graduation ceremony in Atiu in late January to celebrate the success of 14 graduates.

CITTI director Caroline Medway-Smith said she was honoured to travel to Atiu to be a part of the ceremony.

Awards were distributed to the 14 successful recipients for achieving in either level two electrical engineering, stage one in national pre-building trade or level one and two of building and construction allied trade skills last year.

“It was such a beautiful ceremony,” Medway-Smith said.

“A lot of pride and emotion and plenty of support were displayed amongst the families who were at the graduation.”

Medway-Smith said at least a third of the population of Atiu was present at the ceremony.

“From the young toddlers to the mamas and papas, everyone was there in full support of the graduates,” she said.

The ceremony disclosed that a number of tertiary learners collaborated with secondary school learners in the 2017 courses.

“A total of five community members, who have left school and are already working, joined the school students in their learning.

When it comes to island learning, Medway-Smith says that Atiu is leading the way.

“It’s a fantastic model. They are being significant in providing a service for their community,” she said.

Medway-Smith said it was really an emotional experience and one that she was absolutely privileged to be a part of.

“The whole aim is to keep the students on the island, and the students in Atiu can already see that there is a pathway into tertiary.

“Once they leave school, students can go and get a job and still carry on their learning - It is a great collaboration,” she said.

Amongst the 14 graduates, one girl Lisa Witcher stood out as she received awards for graduating level one and two building and construction, stage one of pre-trade building, and electrical in 2017.

Medway-Smith said Witcher was the only girl out of the 14 graduates.

Witcher said she desires to go to university and train to become a teacher and feels that partaking in the courses will help towards her university entrance. Witcher, who is in her last year at Enuamanu School has worked really hard in a cohort of young men.

“She is such a focused young lady,” Medway-Smith said.

“Witcher wasn’t fazed that she was the only girl, she just made it work, as the guys would help her with some of the practical things, and she would help them with the theory,” Medway-Smith said.