PM Mark Brown: ‘We cannot see climate change, but we do feel its impact’ 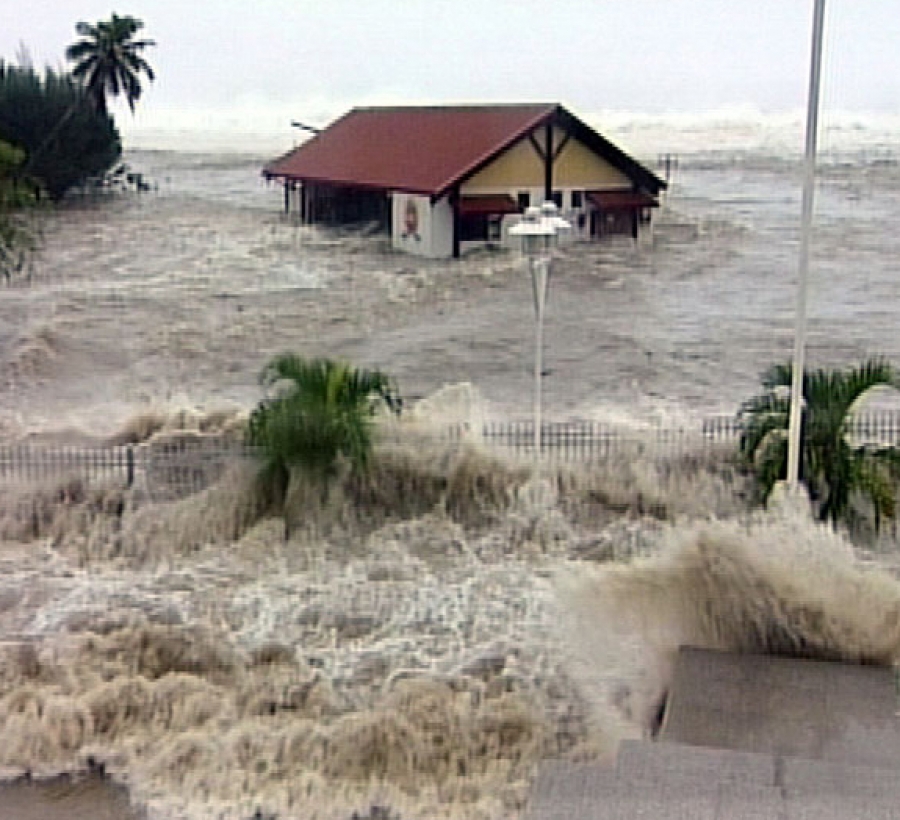 This dramatic photo, taken from the courthouse, shows the ferocity of one of five cyclones that hit Rarotonga in 2005. 18071735

We may not be able to see climate change happening around us, but its impact is very real, and it is up to all of us to do what we can to mitigate its effects and help bring about a better and safer future for the Cook Islands and its people, writes Prime Minister Mark Brown.

I want to start today by talking about the good news and bad news that has come out of Aotearoa this week.

There is good news that New Zealand appears to be getting on top of the recent Covid-19 Delta outbreak that has infected 800 or so people there in the last month. They appear to have flattened the curve of the infection, and feel confident enough to allow the rest of the country – outside of Auckland – to drop down a level. It’s good news for New Zealanders.

It’s also good news for us in that as those levels drop it brings us closer to loosening up our border, not only to begin allowing visitors back in, but to allow nearly 300 of our people who were caught in the lockdown in New Zealand, to come home.

The bad news is the cruel and completely unprovoked knife attack on innocent people at a supermarket in Auckland. It’s frightening to think that this type of activity which we’ve seen happening on the other side of the world has now happened in our region. Our prayers go out to the victims of the attack and their families and we wish the injured a speedy recovery.

I’d like now to move on to something that is going on around us each and every day, but which few of us probably give much thought to as we go about our daily lives.

It’s a potential threat every bit as present and as possibly damaging as the Covid-19 pandemic, but maybe not as obvious – yet both put individual lives and national economies at risk.

I’m talking about climate change – a phrase I’m sure we have all come across by now.

Like Covid, climate change has the potential to become a significant humanitarian disaster and it also needs to be taken just as seriously in terms of what it may mean for the future of our planet and the global population.

The difference for us here in the Cook Islands is that we are on what some might call the ‘frontline’ of climate change if you like, which only serves to highlight the importance of this issue.

We are living in an age in which the atmosphere is rapidly changing, a phenomenon that evidence indicates has been brought about largely by humanity’s growing reliance on fossil fuels since the dawn of the industrial revolution, and in particular with the advent of coal use and the emergence of the automobile.

We cannot see climate change, but we do feel its impact. Here in the Cook Islands, we are already experiencing changes like increasing storm intensity and an increase in the intensity of rainfall, in addition to periods of drought as well, particularly on Rarotonga last year, and also significantly on Tongareva.

World scientists, working under the auspices of the United Nations, produced their latest climate change report just a few weeks ago. Among other things, this report highlighted the fact that the world is indeed warming, and alongside that our oceans, with a corresponding impact on all that lives within them.

What will happen to the Cook Islands and how can we cope with these changes has been the work of a number of key agencies, coordinated through Climate Change Cook Islands under my Office of the Prime Minister.

However, this is not a task for only one office or even just for government – this is a task for all of us, from central and island government to our communities and individual people. The issue of climate change is underpinned by world science, but in the end all the action is at essentially national, island and community levels.

A few facts for you – over the past decade the Cook Islands has been experiencing sea-level rise at an average of 4-6mm per year, while rainfall trends continue to be disrupted by the South Pacific Convergence Zone, which is currently located between our northern and southern island groups.

Ocean temperatures being monitored in the Cook Islands outline longer periods of warming pools and with that associated impacts such as coral bleaching of our reefs, our natural protection barriers to the sea.

Saltwater intrusion affecting taro crops on our atoll islands has been recorded and communities have had to seek out alternate sites where possible. And our most recent visits to Pukapuka along with those to other islands show clearly that the impacts of higher-than-normal tides and seas are leading to increased erosion of our motu shorelines.

In November this year, virtually all countries, including the Cook Islands, will meet to negotiate a deal to complete the Paris Agreement, an international treaty that seeks to avoid dangerous climate change by limiting global warming to 1.5 degrees Celsius, as measured from the dawn of the industrial revolution.

Today we are at 1.1 degrees already, and predictions by global scientists highlight the fact that unless drastic action is undertaken by all countries, then the trajectory of global temperature will take us beyond 1.5, above 2.0 degrees, and up to nearly 3.0 degrees, which would be disastrous in the sense of increased melting of polar ice sheets and associated sea level rise.

While what action we take here in the Cook Islands is not globally significant, we will do our share, while also balancing this against the need to continue our development as a nation and seek prosperity in terms of health and well-being for all of us here in our country.

I am keen to conclude the details needed to bring the Paris Agreement into effect.

We need to focus on how we can increase access to climate financing to enable us to better adapt to the impacts of climate change and build the needed resilience to withstand these long-term changes.

We are all hopeful for a speedy and mutually beneficial conclusion to these negotiations, and as one leader among many in the global community I will press our case with determination, both as a representative of the Cook Islands and also as part of a wider global group of 38 small islands, the Alliance of Small Island States.

As I have said, we may not be able to see climate change happening around us, but its impact is very real, and it is up to all of us to do what we can to mitigate its effects and help bring about a better and safer future for the Cook Islands and its people.