Afterlife of car tyres – to sink or let sit?

Saturday 5 February 2022 | Written by Te Ipukarea Society | Published in On the Street, Opinion 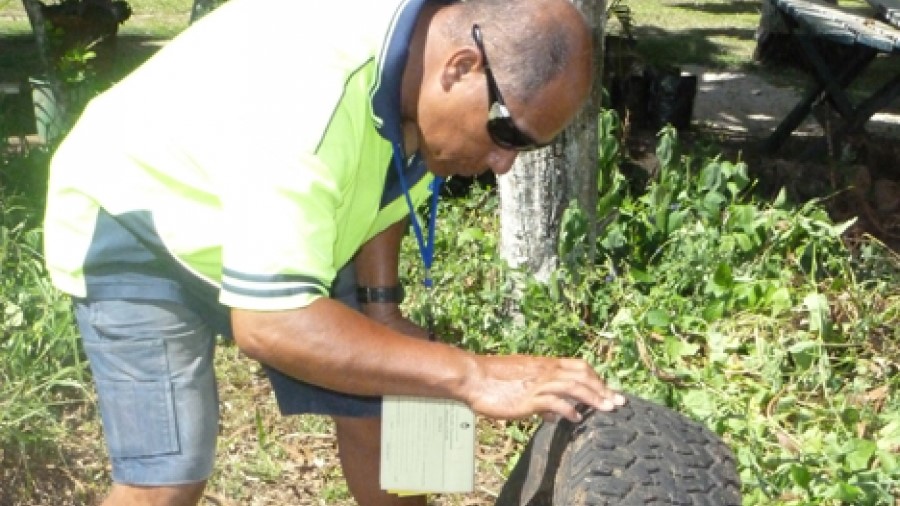 Over a large period of time, the Cook Islands Motor Centre where I am currently employed, had exceeded its capacity for storing tyres that were no longer fit for road use. Despite this, our company continued to store tyres so that they don’t become a neglected breeding ground for mosquitoes in peoples’ backyards, writes company general manager Teariki Pennycook.

Attempts were made to find someone in New Zealand to accept these old tyres. However, when Recycle Cook Islands approached these NZ based businesses with the idea of sending them 20-foot containers full of our tyres, there was not a lot of interest.

A meeting was then called for with various stakeholders such as the environmental NGO Te Ipukarea Society, when I had sought out consultation with the Ministry of Marine Resources on the idea of disposing the tires out at sea. This was denied under the Marine Pollution Laws (MAPOL).

I was however able to provide an Environmental Impact Assessment (EIA) that demonstrated an artificial reef was possible from scrap tyre. This was based on the work reported by the association of the Engineering and Physical Science Research Council, School of Ocean and Earth Science- University of Southampton and ICES Journal of Marine Science.

Our proposal to dispose End of Life Tyres (ELTs) at sea involved eradicating buoyancy problems by depositing the tyres at a depth of 1.5km so that there is no air entrapment, eliminating the risk of remobilisation. The assessment also indicated that there was no toxicity released back into the sea and some aquatic species thrived on the tyres.

Te Ipukarea Society was totally against the idea, as tyres are now known to leach harmful chemicals into the ocean over time.  The Secretariat of the Pacific Regional Environment Program (SPREP) also provided advice after I contacted and shared the EIA report with them for their professional opinion.

SPREP stated that the Cook Islands is a party to the Basel and the London Dumping Convention (treaty designed to reduce movement of hazardous waste and marine pollution), which both don’t permit the disposal of tyres at sea. Not to mention, the Cook Islands reputation for the title for world’s biggest marine park, would be at stake. Finally, the ‘zero waste’ vision set in the agreed National Solid Waste Management Strategy was another obstacle.

Essentially, the disposal of tyres at sea is not an environmentally sound act.

In desperation, I still wanted to pursue this idea, for example operate in the black of night so that no one would know of what we were doing. However, it only takes one person to talk and the whole island would know.

So, I went back to researching the issue, and I came across a newly developed system from Waste Management New Zealand promoting tyre recycling. After immediately contacting them and explaining our current predicament with storage space, they agreed to take our tyres.

I took the opportunity to visit Waste Management New Zealand while on a business trip, where they had an impressive orchestration of how the ELTs were being recycled. They were being shredded into chips for Golden Bay Cement to take and use for their tyre derived fuel, used in the cement manufacturing plant.

After analysing all the costs and procedures needed to carry out this operation, I made sure that our local Director of Biosecurity Division put me in contact with his counterpart in New Zealand for preparation.

The same principle should be applied to other imported items that eventually end up in our waste stream, from plastic bottles to washing machines, fridges, to heavy machinery.