Friday 28 May 2021 | Written by Alana Musselle | Published in National, Technology 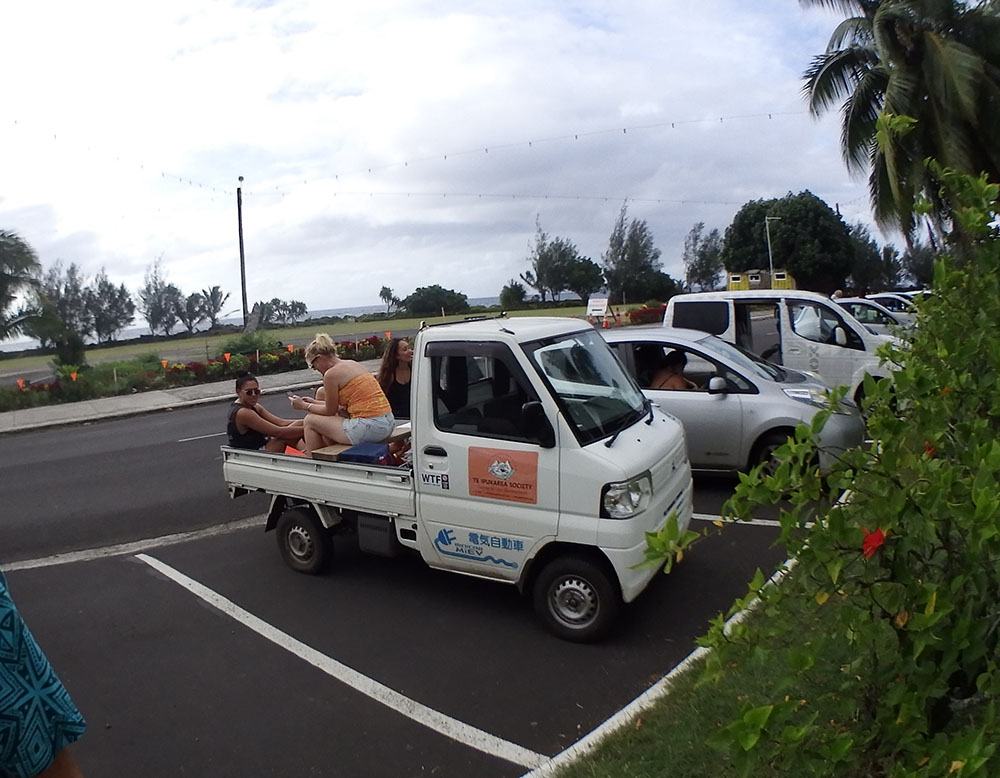 A strand of electric cars opposite the Constitutional Park ready to set off on Sunday. 21052512

The first ever Rarotonga Electrical Vehicle Rally held on Sunday brought together young and adult participants who competed to raise funds for environmentally favoured initiatives./

Thirty-six people ranging from the ages 16 to 80 years old and distributed among 14 cars joined the inaugural Rarotonga Electrical Vehicle Rally on Sunday.

Participants met at the Constitution Park at 3pm to begin the rally and ended at the Outrigger Bar at the Waterline Restaurant.

Each team who participated paid a $40 entry fee which was given directly to Te Ipukarea Society. A substantial amount of money was raised during the day with all proceeds going towards the Society’s environmentally favoured initiatives for the rest of this year.

The aim of the rally was to fundraise for Te Ipukarea Society as well as raise advocacy for electric vehicles on Rarotonga. Thirty trivial questions about Rarotonga were asked throughout the drive with the team who answered the most correct questions as well as completed the rally with the least amount of kilometres won.

Team MOTU, driven by Tim Meyer and including four other members, won first place overall by answering the most correct questions.

Other prize winners included Team Te Aponga who completed the rally with the least amount of kilometres at 23km.

Prizes included car care items as well as personal products which were given out at the prize giving held at the Outrigger Bar.

The whole point of the afternoon was to create a day of fun where they could also create advocacy for electric mobility on the island and to excite new people about electric vehicles, he said.

“We believe it is the way to go. It is so much nicer for our roads and our environment as it creates zero pollution.”

As a result of the rally, two non-members decided they would look into buying an electric vehicle.

Meyer explained that affordability is usually the biggest issue people face when considering electric vehicles, but the way technology is advancing, he believes that these vehicles will very soon become available at a cost that is not too outrageous.

“The more we have on the island the better,” said Meyer.

Peter Heays, who set the rally path for the day, said: “It was an excellent first-time rally, we will be doing it again and extending the invitation to other electric vehicles and hybrid owners on the island.”

Because electric vehicles do not require fuel to run, costs were very low which created appeal.

There are currently 35 electric vehicles as well as a number of motorbikes on the island with about a dozen hybrids (vehicles which run both electrically and on fuel.)

Heays said he believed Cook Islands would be amongst the top five countries in the world that has the most electric cars per capita.

With the technology rapidly advancing allowing for costs to lower, he hopes this number will hopefully rise.