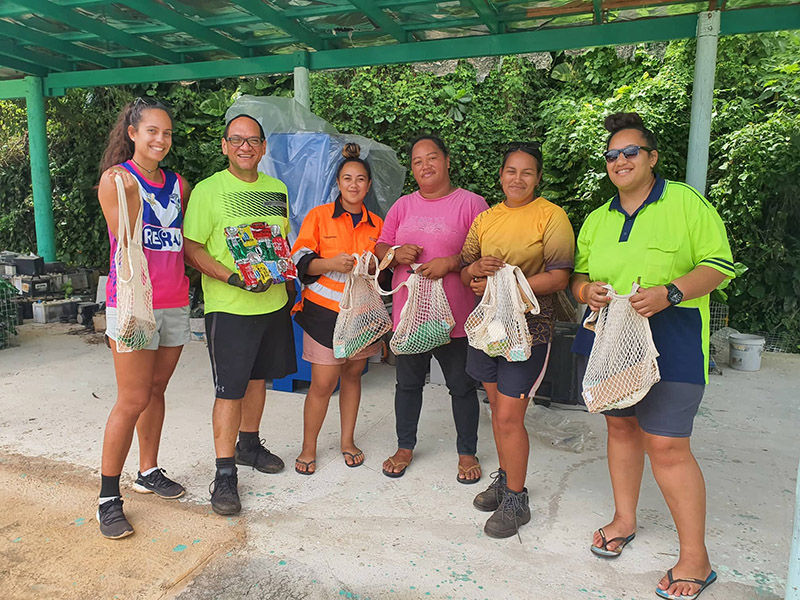 Due to limited infrastructure in the Pa Enua, most recyclable waste unfortunately gets transferred straight from households to the local landfill. Mangaia, however, is on its way towards a much-improved waste management system.

The recently built recycling centre near the harbour, together with a can crusher and new glass crusher means that soon, much of the recyclable waste can be diverted away from the landfill.

To determine just how much recyclable waste there is in Mangaia, Te Ipukarea Society (TIS) conducted a mini household waste audit of 7 per cent of the total household population.

We also surveyed businesses about quantities of imported goods with recyclable packaging.

This work was done with the support of the island government and the fantastic ‘Solar Girls’ - a group of young women whose regular employment is maintaining the grounds of the solar farm as well as other jobs, as required by the island government, including a recent beach clean-up.

We were fortunate to be able to employ the Solar Girls to help with the waste audit - a job they took on with great enthusiasm.

The can crusher proved quite fun and they were determined to increase its efficiency by maximising the number of cans per crush.

They also assisted in completing the audit, measurements, data collection and interviews with local residents on household waste behaviour.

TIS member and local resident Metua Vaiimene joined the Solar Girls in the waste audit and was a big help with the household and business surveys.

Zeb Revake also tagged along on the rubbish truck collection to help with interviews and take footage.

Having all this great local assistance made what could have been a long messy job, a whole lot easier and a lot of fun.

The audit was designed in a way to capture waste generated over a seven-day period and focused on what recyclable waste is currently being generated from local households (tin, aluminium, glass and plastic bottles). Preliminary data from Mangaia’s waste audit showed that plastic waste made up the majority of the waste collected.

Plastic is a major culprit if not reused, as it is currently a material that has no residual value anywhere in the world.

This makes it very difficult to recycle as no offshore country is interested in recycling a product of no value.

There is value in aluminium and tin which can be recycled by offshore countries.

Of the two metals, aluminium is stronger and more valuable as it is used in so many things such as aircraft, cars and joinery.

Mangaia’s can crusher was previously used by the Tanga’eo Rangers, established by Allan Tuara in the 1990s.

Sand for building purposes has become a scarce commodity in Mangaia so there is a lot of interest in reusing the crushed glass as an alternative to sand, and for filling pot-holes in the roads.

There are some great case studies for using glass in concrete.

At Apii Enuamanu Atiu, crushed glass has been used with cement, sand and gravel to make concrete footpaths as well as the foundations for a school market stall.

The students are involved at all stages from crushing the glass, to mixing, to laying the concrete.

Compressed aluminium and tin are waste items that are of interest to Recycle Cook Islands.

The data collected from the waste audit will also help identify the cost for shipping and handling costs to get aluminium and tin off the islands.

Thanks also to Alice Leney for advice on conducting the waste audit.