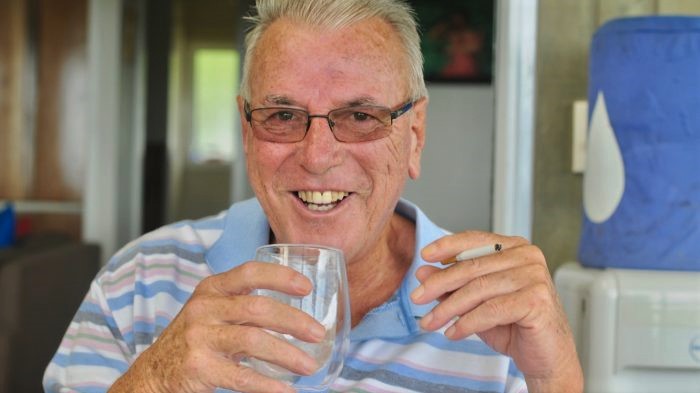 One of the Cook Islands’ genuine characters, businessman Jack Cooper of the iconic Trader Jacks, the Avarua harbour waterfront bar and restaurant, passed away on Wednesday after a prolonged illness.

Jack, who was in his late 70s, was forthright, unapologetic, kind hearted, witty, and known for his extremely outspoken colourful expressions of communication, and the self-appointed president of the Bombay Gin Society.

Also known locally as “Tiaki”, he had dedicated half his life to his businesses and tourism in the Cook Islands.

Trader Jacks had only been open for six months when Cyclone Sally wiped it out on New Year’s Eve 1986-7. After a couple of years of rebuilding work, Trader Jacks reopened in 1989.

In 2009, Jack organised the catering for the Pacific Mini Games, producing 78,000 meals in 17 days. He also sponsored the annual Vaka Eiva paddling event for 12 years.

Many live local and international bands have played at Traders such as New Zealand singer-songwriters Tim and Neil Finn with Dave Dobbyn, and Ardijah.

Trader Jacks has also attracted many interesting patrons over the years, including former US Secretary of State Hillary Clinton who visited the Cook Islands for the Pacific Islands Forum in 2012, former Deputy Prime Minister of New Zealand Winston Peters, former and current All Blacks and nearly every visitor who has landed on the shores of the Cook Islands.

In 2018, Jack received a special individual award at the Air New Zealand Cook Islands Tourism Awards for his outstanding contribution to tourism.

His long-time partner Rosa Tauia was very much involved in the operations of Trader Jacks but took a sabbatical some years ago to assist with the caregiving of Jack when his illness worsened.

He is survived by his daughters Melanie Cooper, who lives in Rarotonga, and Vanessa residing in New Zealand and partner Rosa Tauia.

Funeral arrangements are yet to be announced.

25 years behind bars... some very amazing stories that hopefully will be published in that book. Working in his bar for 12 years of my life, saw a man who taught me many things in life, some good, some very very bad, but a man who always had the best interests at heart. You can hear him now with all the other lads, banging his class at the end bar and demanding "more piss".... RIP Jacko.