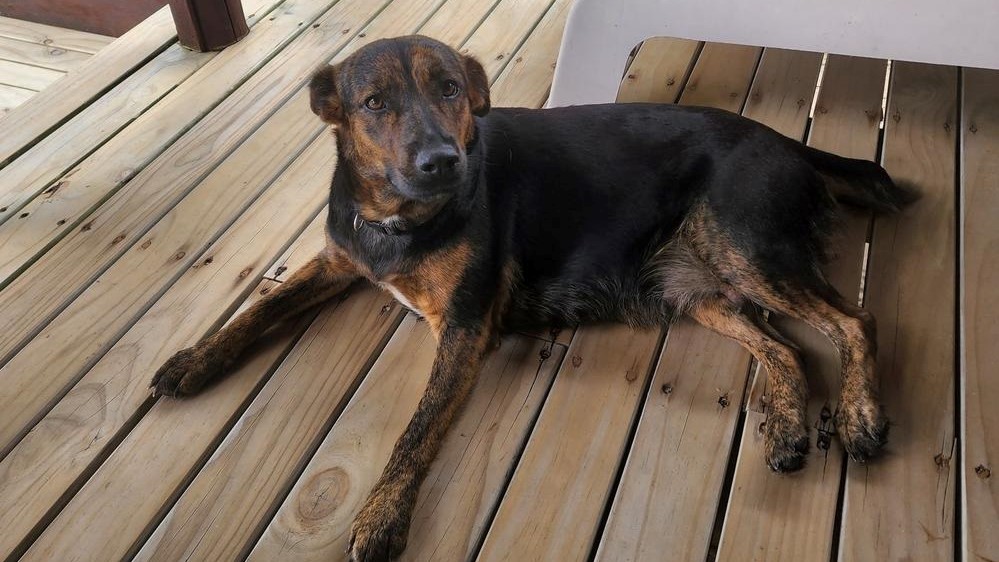 Olive, who was abandoned by her owners has been rehomed in Rarotonga. Photo: SPCA/22062840

A stray dog who was surrendered to the Cook Islands SPCA after being unable to travel to New Zealand for adoption has found a new forever home on the island of Rarotonga.

Olive, who is also affectionately known as Oli, was adopted by local resident Carmen Temata last week, after being saved by a visitor to the Cook Islands back in May, Sally Christian.

According to Christian, she was in Rarotonga on holiday when Olive, who was a young pregnant dog at the time, sat down beside her, and never left her side.

After seeing her chased by mobs of other dogs and kids beating her with sticks on the beach, and being unable to locate her owner or anyone that knew her, Christian decided to adopt her temporarily during her stay and have her spayed.

However, after having her desexed, Christian decided she didn’t have the heart to leave Oli behind in Rarotonga, so asked the Cook Islands SPCA to take her in and care for her while she sorted out her adoption and international travel to New Zealand, which they did.

“For a week she never left us, sleeping on the balcony, never going far, and always greeting us with a wagging half tail on our return,” Christian shared online via a fundraising page she set up for Oli’s travel, which has raised over three thousand dollars.

“With us due to leave and the police going around shooting dogs, and after many phone calls and a lot of begging, the SPCA finally agreed to take her in if I could get her there.

‘So with a last-minute dash before we flew out I got her to the SPCA,” she added.

According to the overseas dog-lover, Oli’s blood test could not be done from Rarotonga which meant that she was unable to adopt and bring the loveable animal over to New Zealand as planned.

Although she was “disappointed”, she said she was also “happy” that Oli had found a new home and had been adopted by someone who wanted to adopt her and needed a companion.

She added that any monies raised on the Givealittle page which was initially set up for Oli’s travel will now be donated and split between the Cook Island’s SPCA and voluntary veterinary Clinic, Te Are Manu.

Manager for the SPCA shelter, David Pokia, who helped to take care of Oli and relocate her said: “Sally has been in consistent contact with us about Olive, who was homed last week to an elderly lady who lost her husband last month.

"Before she dropped Olive off to us we didn’t know that she even existed, as we had never seen her before.

"Where she was staying at the accommodation the neighbours (they) were apparently going to poison her after Sally left, so Sally saved her life, and dropped her off at the SPCA,” he added.

“She will make a great companion, and was homed on the same day that our puppy shelter was opened.”