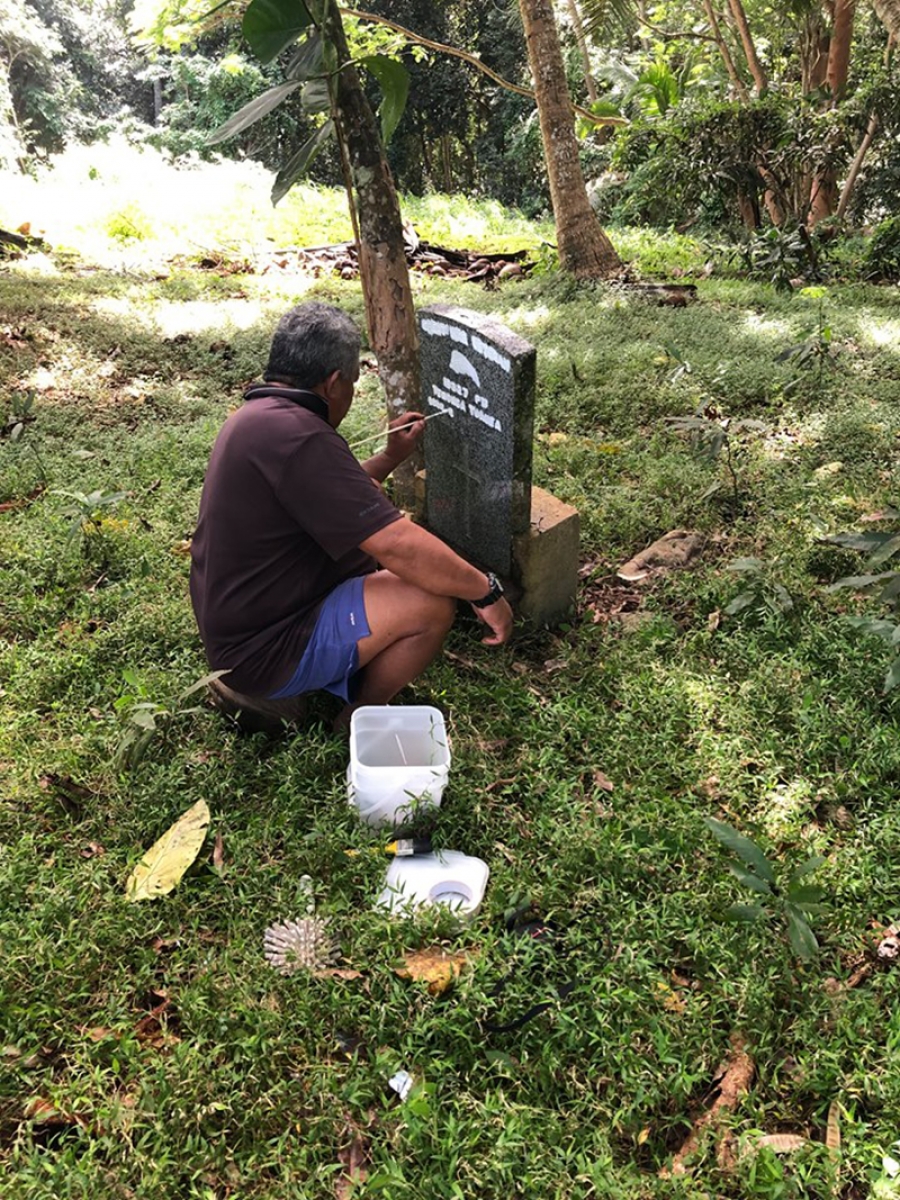 Six young Cook Islands men are at last remembered on the World War One Roll of Honour, a century after they returned home sick and injured to die. Jonathan Milne and Anneka Brown report.

For the Cook Islands soldiers who signed up to serve in World War I, the horror that lay ahead of them was unimaginable. Some were still in their teens. Few had ever left their islands before. Some spoke only Maori.

Even today, it is hard to conceive what they must have experienced as they arrived in New Zealand to be attested into the Rarotongan Contingent of the New Zealand Expeditionary Force to Europe.

“It must have been a shock to the senses for them to see a different world,” says New Zealand Defence Force historian John Crawford. “It would have been an amazing experience for them as they had never left the Cook Islands before.

“But most of them would have gotten very sick soon after enlisting. They were exposed to bugs and different climates which they had no immunity to. It's one thing going to New Zealand – but then all the way to France.”

Yesterday, on the basis of research done by Cate Walker, Howard Weddell, Paula Paniani and Bobby Nicholas, the names of six Cook Islands soldiers were added to the New Zealand and Commonwealth War Graves Commission’s official rolls of honour.

Most died young and without offspring; their names had on the most part been forgotten, their graves on Rarotonga, Aitutaki and Atiu grown over, until the group of researchers uncovered their headstones – and their histories.

The six army Privates are Nga Naeiti, buried in Nikao Cemetery, Rangi Tiaure, buried in Matavera, Mareto Tima, buried by Cook Islands Christian Church in Titikaveka, and Terongo Tuakeo, buried on Atiu. The Aitutaki graves of Taria Tearii and Banaba Tipe have not yet been identified, but the group of researchers will visit the island next month in the hopes of finding them.

The names of 10 men had been provided by the Cook Islands High Commissioner to New Zealand, for recognition. Yesterday, New Zealand Chief of Defence Force Air Marshal Kevin Short announced that six had been approved for inclusion on the rolls of honour.

There was excitement in the communities who have been uncovering and restoring the graves of Cook Islands’ war dead, and researching their histories.

Last night on Atiu, island council executive officer Maara Tairi drove from house to house, telling the mamas and papas of Private Terongo Tuakeo’s inclusion. “It’s an honour to have someone from Atiu on that list,” he told Cook Islands News.

* Editorial: They were forgotten – but never again

Bobby Nicholas, Paula Paniani and Cate Walker were delighted with the outcome. “Today is a significant day in the history of the Cook Islands,” they said. “Our hope is that the Cook Islands will embrace their WW1 story so that this story will grow with future generations.”

Crawford recommended the six soldiers be added to the rolls of honour, because they had died within two years of the end of WWI, of injuries or illness (tuberculosis, in these cases) that was contracted or aggravated in their war service with the Army.

The other four may yet be included, if more evidence can be found of their causes of death.

“The lack of evidence that these men died as a result of their military service does not detract from the service and sacrifice of these four men who volunteered to serve with the New Zealand Expeditionary Force,” Air Marshal Short said.

“If further information is found regarding these four cases, the NZDF historian would be very pleased to take it into consideration.”

Crawford said: “Out of all of my research, this was the most complex and difficult to investigate as there were no death certificates,” he told Cook Islands News. “Even for those that had medical files, it was hard to read doctors’ handwriting.”

Air Marshal Short’s decision has been forwarded to the New Zealand Ministry for Culture and Heritage for inclusion on the National War Memorial Roll of Honour and to notify the Commonwealth War Graves Commission.

Cause of death: tuberculosis

Nga Naeiti was first posted to the depot at Ismailia in August 1918, after that his service is not known until the war ended and, on December 14, he embarked at Suez bound for New Zealand.

A February 1919 medical board noted he might have tuberculosis, and that he was no longer fit for active service but was fit for civil employment. The board considered granting him a pension, but changed its mind. He died in the Cook Islands of "tubercular glands" on 28 January 1921.

Private Taria Tearii (aka Tearii Taria), No. 84513
Cause of death: tuberculosis

Private Taria Tearii, is believed to be buried on Aitutaki.

Taria Tearii (also known as Tearii Taria) was “about 18” when he joined the Rarotongan contingent. After the war on February 19, 1919, his health was reviewed by a medical board. Although the record of this board's proceedings is difficult to read it is clear that it found that his original disability was “influenza pneumonia”, which had been contracted during his military service. Tearii's state of health was clearly very bad as the board concluded that his "capacity for earning a full livelihood in the general labour market" was lessened by 100 per cent and that his disability was permanent. He died on September 19 that same year, back home on Aitutaki in the Cook Islands. His age is recorded at that time as being 18 years, and the cause of death given as tuberculosis.

Private Rangi Tiaure, No. 84532
Cause of death: tuberculosis

Rangi Tiaure joined up on July 10, 1918, in good health. Within just two or three month, the medical board found he was suffering from tuberculosis and was unfit for active service. He died in the Cook Islands on January 13, 1920, aged about 23 from “tubercular glands”. He died as a result of the same condition that led to the termination of his military service. The medical board that examined him in New Zealand thought his condition had been aggravated by his war service.

Private Mareto Tima, No. 84541
Cause of death: tuberculosis

Mareto Tima, 26, was in good health when he joined up in June 1918; he was given a certificate of leave in lieu of discharge a year later. He returned to Cook Islands where he died on August 10, 1919, at the age of 30. His cause of death was later listed as tuberculosis, with his “lungs thoroughly collapsed”. Tima had been granted a war pension because of his “chest trouble”. He died just two months after discharged from the Army. On his grave his name is spelled “Mereto”.

Private Banaba Tipe, No. 60653
Cause of death: tuberculosis

Private Banaba Tipe, is believe to be buried on Aitutaki.

Banaba Tipe was about 28 when he was attested into the 3rd Rarotongan Contingent of the New Zealand Expeditionary Force in Auckland on March 12, 1918. His chest was well-formed, his lungs were normal. He arrived at Suez on August 4, 1918 and was posted to the New Zealand training depot before joining the Rarotongan Company on September 18. The following month he was admitted to hospital. Tipe remained ill until embarking for New Zealand just before Christmas. During the voyage back to New Zealand, a medical board examination concluded he was suffering from tuberculosis he had contracted during his military service. He was not fit for any kind of military service. After leaving the Army, Tipe returned to Cook Islands where he died on August 2, 1920. He was aged 30.

Terongo Tuakeo was generally fit when he signed up, aged 20. He disembarked at Suez on December 27, 1916. Following a brief period with the training and depot unit he was admitted to hospital on January 9, 1917. He was sent back to New Zealand in Marchm suffering from "Inflammation of Lymphatic Glands (T.B.)" after a swollen gland was incised. His father and brother, too, had died of tuberculosis. Back in Auckland, doctors expressed doubt about his history because he didn’t speak English. He died at home on Atiu on July 6, 1919.