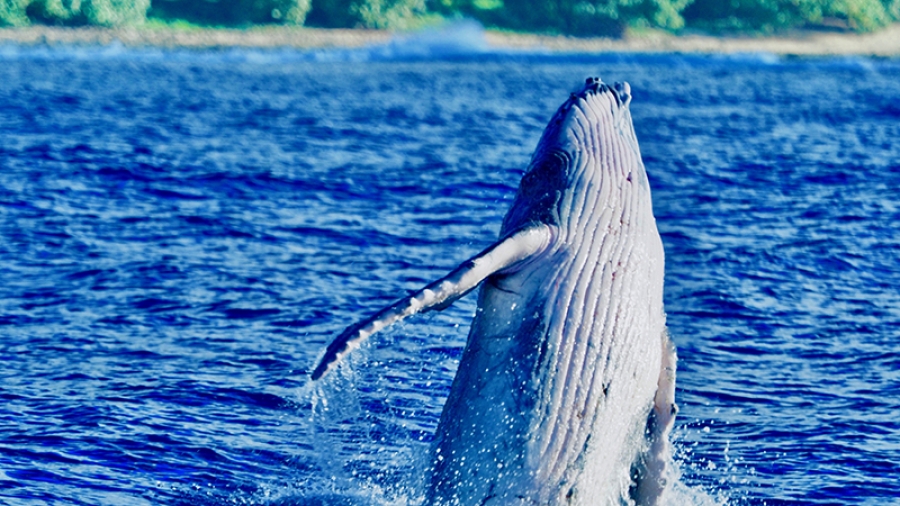 A humpback calf breaching off the coast of Rarotonga. PHOTO: NAN HAUSER. 20090107

Despite challenges created by the Covid-19 pandemic, Cook Islands Whale Research is describing 2020 as an intriguing but ultimately successful year for furthering our understanding of earth’s largest mammals.

The year 2020 was an unusual one for Cook Islands Whale Research.

To begin with, the Covid-19 pandemic.

Despite the restrictions, she said they were able to put together a team of volunteer research assistants, but were unable to welcome any visiting scientists.

“It was an unusual field season with such a small team, but we made it out on the water as much as the weather permitted and had a very successful season,” Hauser said.

The season began on May 19 with the arrival of a young whale which spent roughly one month frolicking in the waters around Rarotonga, and it would be three more months before Hauser and her team of researchers would have regular sightings.

With whale season typically in full swing by June, she suspects the delayed migration could have been the result of climate change.

“This was an unbelievably late start to the season. Our humpback sightings peaked in late August and were largely consistent until the end of October,” she said.

Adding to a strange year was a mysterious occurrence involving a pregnant humpback.

Hauser said the whale was observed to be in labour off the coast of Rarotonga in early October.

Several days of observation saw the female, “round like a blimp”, resting on the surface followed by bursts of activity – including smacking her belly with her pectoral fins and breaching the surface - landing on her stomach.

Two days of rough seas meant the team lost track of the whale.

And then, she disappeared, never to be seen again.

“We had many people keeping an eye out for her on shore and from fishing boats,” Hauser said.

“We contacted other researchers across Oceania, but we had no reported sightings of this whale. Unfortunately, we do not know if she had a successful birth in the Cook Islands or elsewhere in Oceania.”

Overall, researchers witnessed 377 humpback sightings, and data continues to be analysed to determine the exact number of individual whales observed.

Sperm, Minke, Sei, Short-finned pilot and Blainville’s beaked whales were observed in addition to Humpbacks, along with a pod of at least a dozen Killer whales and 36 groups of spinner dolphins.

Researchers also came across a range of sharks, including Hammerheads, an Oceanic white tip, and a tiger shark.

During the season a number of skin samples were collected and will be shared with other researchers at NZ and American universities. Humpback singing was also recorded and will be sent to acousticians with the Center for Cetacean Research & Conservation (CCRC).

Hauser and her team await the beginning of the 2021 season, and it remains to be seen if the annual migration will be delayed as has been the case in recent years.

“As global ocean temperatures increase, this may alter the humpbacks’ migration between Antarctica and Oceania. This is likely due to changes in their food sources, such as krill and herring,” she said.

“The whales may need to spend more time looking for food and feeding. They must eat enough to ‘fast’ for 6 to 8 months while they migrate to the warmer waters of Oceania to mate and give birth and migrate back down to the feeding grounds in the Antarctic.”