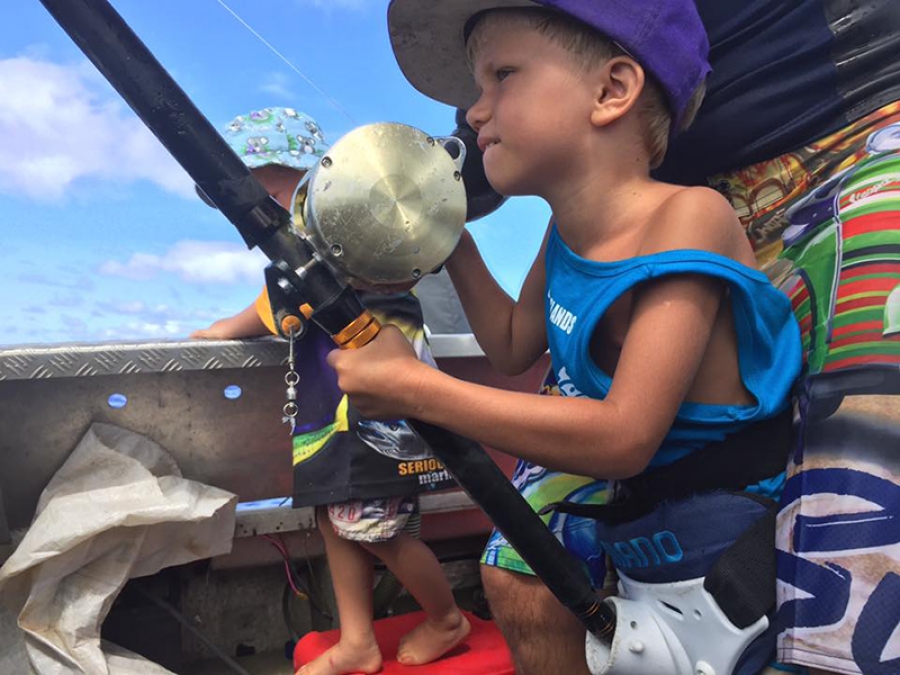 Five-year-old Hunter fi shes out at sea with his brother Kaiden and dad Brett on Boxing Day. 18011904

BROTHERS Hunter and Kaiden Koekemoer would rather spend time out at sea fishing than staying indoors.

The two are having a blast these holidays, reeling in plenty of fish and creating lifetime memories.

Father of the youngsters, Brett, works as a skipper for Marlin Queen and the desire to fish out at sea has already sparked in the heart of his sons.

Amy, the boys’ mother, says every morning Hunter and Kaiden ask, “Mum can we go catch a fish? Can we go fishing?”

“Their days’ kind of revolve around fishing,” Amy said.

Five-year-old Hunter has a goal this year to catch a marlin, as he has already caught most of the other fish found in local waters.

Amy says she takes her boys fishing off the wharf a few times a week, and sometimes they get to experience fishing out at sea with their Dad.

“They love going down to the harbour midday when the fishermen are feeding the fish and the trevally’s come around too.”

Hunter and Kaiden have also enjoyed many of their days at the beach hanging out with family friends and keeping cool in the hot summer.

A highlight of the holidays was when they got to meet a police officer and were shown around the local police station.

Three-year-old Kaiden aspires to be a police officer when he grows up and Amy said as they were driving past the station, her boys were asking to see the jail.

“When we pulled into the station, I got talking to someone and then when I turned to see the boys, they had asked a police officer if he could take them to see the jail.

“The police officer was so accommodating and took them around the station and showed them the cell,” she said.

With only a few weeks left of holidays, Hunter and Kaiden are excited to be going back to school at Apii Te Uki Ou to see all their friends and meet their new teachers.

Hunter says his goal this year is to improve his reading and maths.

The Koekemoer brothers have certainly appreciated their school break and spending time with their family.