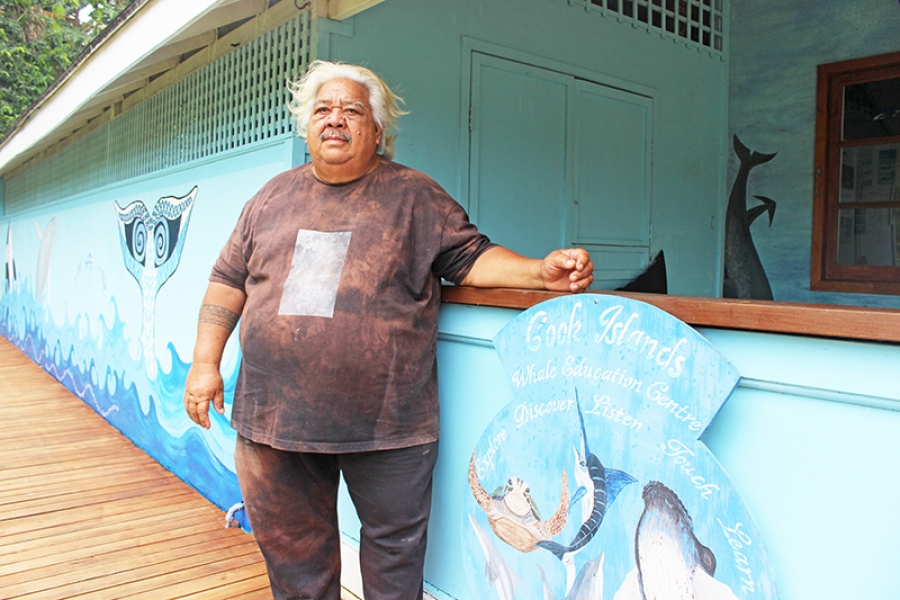 Mike Tavioni outside the now-empty Cook Islands Whale and Wildlife Centre in Atupa. 17110313

Rarotonga’s popular Cook Islands Whale and Wildlife Centre has closed its doors for the last time.

Although former managers Sheryl and Huw John did not want to comment on the reasons behind the closure of the business, they said their company, Cook Islands Wildlife Centre Ltd, which owns the exhibits that were on display at the Atupa back road centre, may pop up at a new location on the island in the future.

Huw John said all the exhibits had been stored away in a shipping container until they decided what to do next.

CINews was alerted to the sudden closure when Rarotonga resident Trish Thompson wrote a letter to the editor lamenting the fact that the island was about to lose a much-admired attraction.

“Sheryl and Huw have not just run a business but have helped educate us about birdlife and other animals on the island and how to care for birds especially when they are injured or abandoned as chicks,” she wrote.

“They have provided great resources for school visits and shown children why we need to protect the creatures in the lagoon and ocean.”

The land on which the centre’s building still stands was originally given by Ellena Tavioni-Pittman for educational purposes and she said as long as the building was used for education in future, she would be happy.

“I’m just interested in young Cook Islands children being more aware, and educated on everything, from the environment, the ocean, to health.”

Over the 17 years it has been open, the centre has captured the imagination of thousands of visitors, both young and old.

School groups regularly visited the centre and educational courses had been adopted into the local school curriculum on how to care for the environment and take “ownership” of their whales, dolphins, sharks, turtles and creatures on the land.

And if it hadn’t first been for Tavioni-Pittman’s generosity, it may not have ever been built.

More than 17 years ago she was asked by her uncle and local carving legend, Mike Tavioni to help out with a base for the then newly arrived whale researcher from the US, Nan Hauser.

After being approached by Hauser, Tavioni discovered they shared a mutual passion for whale conservation.

“When Nan arrived here, someone told her that I collected whale bones, whale oil, or whatever I can.”

Tavioni says he was excited to hear Hauser wanted to start a whale research programme.

“At the time we seemed to share the same interests and I was happy to see someone with the same attitude to preservation of whales.

“I thought that it was appropriate that she have a base to work from, and maybe that base could have an educational centre. So that locals, especially, could access information about whales and why it’s important to conserve them.

“On that understanding I asked my niece who owns this land for a section to build that place. And I told her it should be at no rent, as it was an educational thing.”

Standing at the almost-empty centre last week, he said all that was left inside now were his whale bones and an old harpoon.

The centre got off to a slow start in 2000, opening only sporadically until Hauser brought in Sheryl and Huw John, who turned it into a commercially viable business.