Well-travelled launch on way to NZ 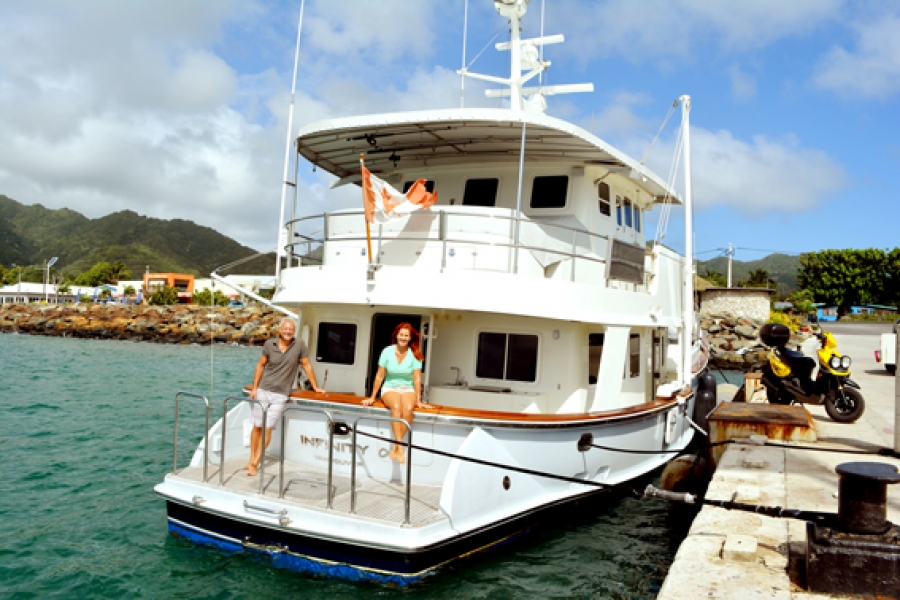 Julie and Andy Nemier on their launch Infinity docked at Avatiu Wharf earlier this week. 16080917

Avatiu Wharf was host to a beautiful boat this week, when Julie and Andy Nemier called in on their launch Infinity.

The Nemiers, who hail from North Vancouver, British Columbia in Canada, called at Rarotonga in the course of their journey to New Zealand.

The couple purchased the luxury vessel in 2012, It took 10 days to register and was given the all-clear on November 19, which also happened to be Andy’s birthday.

The couple spent about nine months in 2013 upgrading the vessel, to their taste and also completed some mechanical work. In October that year, they departed Vancouver, starting their journey down the western side of the United States, passing through San Francisco, San Diego before stopping in Mexico.

They made many stops for sightseeing in Mexico, calling at Ensenada, Mag Bay, Turtle Bay, San Jose de Cabo, and before sailing up to the sea of Cortez where they stayed at La Paz, Bolivia.

From there they crossed to the seaside resort city of Puerto Vallarta in Mexico, where they stayed for nine months.

“We stayed that long because we totally loved that place,” said Andy. Nine months later, they travelled through to Barra de Navidad, a little-known town south of Puerto Vallarta, then sailed back up to Puerto Vallarta for a few weeks.

They left Hawaii in April this year and travelled to Christmas Island, Kiribati and then to Bora Bora, in French Polynesia. They stayed a few weeks in Bora Bora before sailing across to Tahiti.

They said their ultimate destination for 2016 is New Zealand, but before that, they plan to stop over in both Tonga and Fiji.

“We plan to spend about a year in New Zealand before continuing our long journey which will include Singapore and a few central Southeast Asian countries,” said Andy.

“We will then continue and head west until we get right round, and I think once we get back to North America we’ll probably get on the Eastern seaboard through the New England States, and then across the Atlantic through to European countries,” said Andy.

Despite some of the challenges involved in long distance sailing, the couple said they have loved every bit of their journey so far.

And they particularly enjoyed Rarotonga, especially as they arrived just in time for last week’s Constitution Day and the Te Maeva Nui celebrations which gave them an ideal opportunity to experience the Cook Islands tradition and culture.