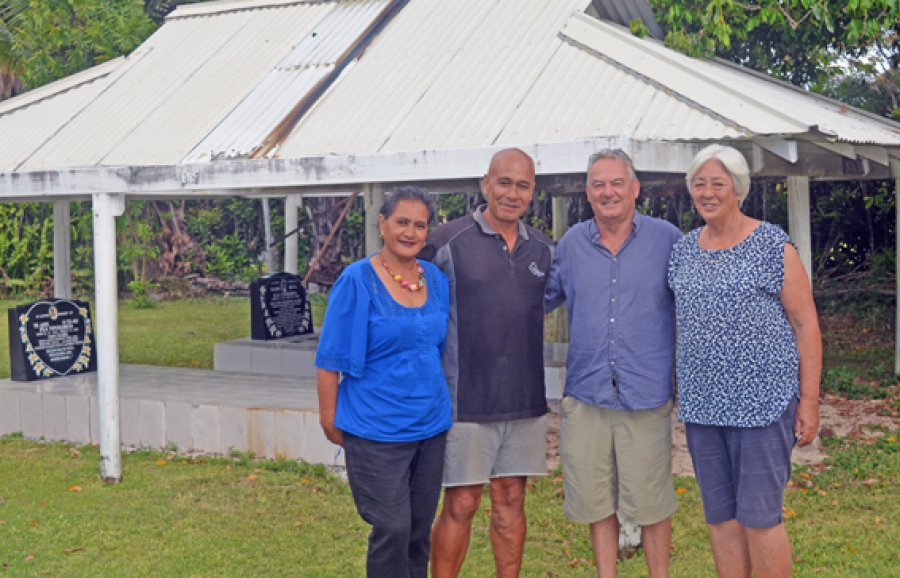 From Left: Maki Tipokoroa, Ina Tipokoroa, John Carroll and Pikiarero Carroll in front of Ina's father, Tearii's grave. John was unaware his dear friend Tearii had passed away until his recent visit to Rarotonga. 17033150

Unbeknown to him, Pua-Tipokoroa had actually passed away several years previously. But though he discovered he’d lost a friend, he ended up gaining more of them after meeting the family of Pua-Tipokoroa’s son, Ina Tipokoroa.

After landing on Rarotonga on Sunday of last week, Carroll, who is visiting the Cook Islands with his wife Pikiarero, made it his holiday mission to reunite with Pua-Tipokoroa. He first visited the Cook Islands Police Service who referred the Masterton resident to CI News.

To help John in his search, CI News posted a notice on the Rarotonga Community and Beyond Facebook page which drew some helpful comments.

Eventually CINews gathered details of Pua-Tipokoroa’s family members and after contacting them, learned that Pua-Tipokoroa was no longer alive.

John was shocked to learn that his friend had died just a year after the pair’s last meeting.

However, he was delighted to learn members of the Tipokoroa family were willing to meet and learn more about their friendship. On Friday, John and his wife met the late Pua-Tipokoroa’s eldest son Ina Tipokoroa at their Arorangi home to pay homage to his late friend.

Ina Tipokoroa is the eldest of six children and is the only one of Pua-Tipokoroa’s children remaining on Rarotonga.

John visited the grave of Pua-Tipokoroa, who passed away in December of 2007 and is buried at the family home, beside his wife Naomi Ruta.

John and Ina were in jovial mood for their meeting and traded fond memories of Pua-Tipokoroa. John first met Pua-Tipokoroa in 1963 when the two worked in the joinery industry in New Zealand.

They became close friends. When asked about some of the memories he had of their friendship, Carroll noted the pair couldn’t afford to get up to much mischief back in the 1960s

“None that I want to report of anyway,” he said, laughing.

Pua-Tipokoroa stopped working for John Carroll around 1970 and the two lost touch until 2006, when the Cook Islander last visited John in Masterton, New Zealand.