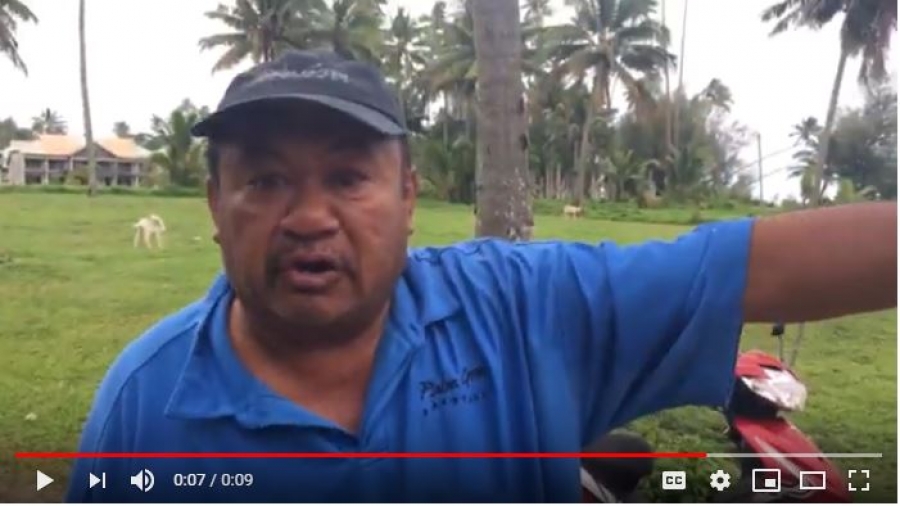 AFTER a series of short YouTube clips featuring Sheraton site caretaker, papa Rouru Tangatapoto, “verbally abusing” a female tourist on a motorcycle outside the derelict hotel went viral in the past 48hrs, CINews went onsite to get his side of the story.

In one video, titled “Violent Thug Attacker Near Rarotonga Derelict Sheraton”, now viewed over 2,000 times, Tangatapoto is seen telling the women to get back on the road, before swearing at her.

The unidentified women said in the upload description, “Avoid and boycott anything to do with the derelict Sheraton. This maniac has been attacking tourists and threatening them with bush-knives. Tries to extort cash gets violent when you refuse.

“Avoid any thing or tour involving the derelict Sheraton. Don't spend money supporting someone who is violent towards women. He is an embarrassment to all Rarotongans. Most Cook Islanders are nothing like this. The tourist is clearly on a public street and this coward even follows solo female and tries to attack her on the street while there are no cars. Shame on this coward!”

Tangatapoto says before the video was shot, the women had been riding her motorcycle around the property, which is clearly identified from the roadside as private.

When he asked her to return to the road she did not comply with his request and circled back through the site a second time.

He says “cheeky tourists” have been known to do this from time to time.

As caretaker, Tangatapoto is tasked by the landowner, Pa Ariki, to collect the property’s $5 entry fee.

The money is used to maintain the grounds.

Often he has to ask would-be snoopers or trespassers to pay the fee or leave. Tangatapoto says he has been very lenient in the past, and in some cases, if a tourist has been unable to pay, he has given them a free tour.

He refutes claims made on the Youtube page that he threatened the woman with a bush knife when she did not pay.

“I just said come out, I never touched her.”

The original video, uploaded three weeks ago by “KrazyViolentKuki Loser”, was posted on the Rarotonga-Community and Beyond Facebook page Tuesday, and was flooded with comments before being removed.

A post made by one member stated that a request had been made to YouTube to have the video removed but was declined, as it was said to be within the website rules.

One of the videos also shows Tangatapoto, driving away in frustration and saying he was going to get the police, when the woman would not leave.

He says he did not realise he was being filmed until she advised him.

The Tourism Corporation’s “Aunty Nane” (Nane Papa) says she is pleased Tangatapoto has told his side of the story and says tourists need to be respectful of local rules.