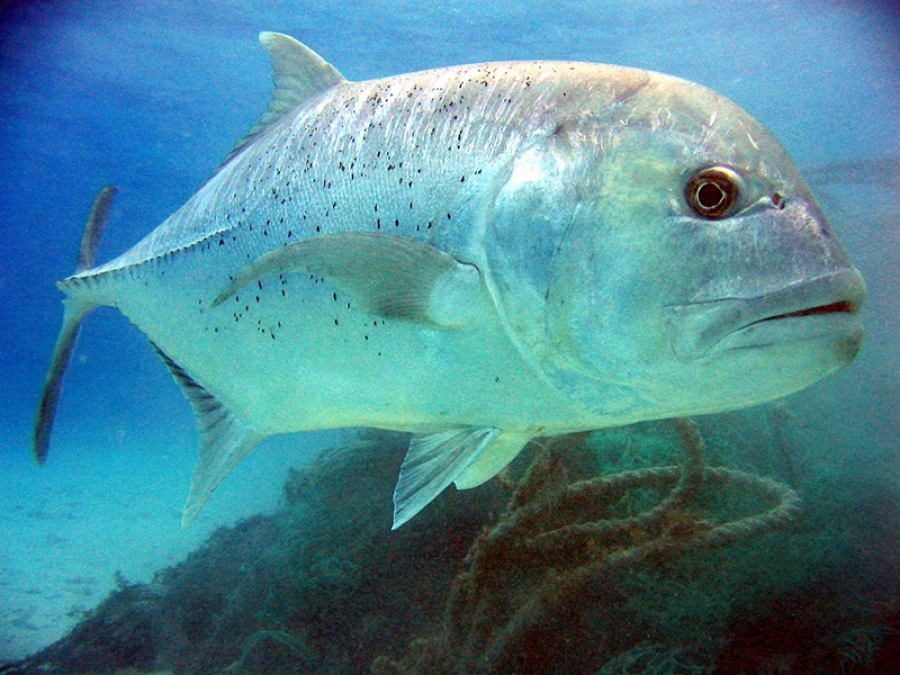 “To feed, or not to feed,” that was the question posed by researcher Natalie Prinz after she conducted a study into fish feeding in Aitutaki Lagoon.

“Animals have fascinated humans, which is why zoos were established, but nowadays we actually prefer to see wild animals in nature, which has had an impact on tourism,” Prinz said.

“There is eco-tourism, that really tries to bring people into nature and show them something that is almost untouched.

“And then there is wildlife tourism, which can be like going out to hunt, to interact with wildlife actively, to be close to animals.

“Many countries across the globe, use feeding to provoke this proximity to these elusive animals that we want to see. This is also relatively unregulated and we don’t actually know too much about the impact of that feeding traditional on the animals themselves.”

Prinz and her team focused on smaller fish, because coastal countries depend on fish not only as a primary food source, but also increasingly in association with tourism.

“Throughout the evolution of reefs, fish have played a really major role, and they’ve always contributed to the overall functional state. So it’s like clockwork, she said.

“For example the fish that feed on algae, have been promoting reef resilience. What’s been talked about quite a lot in the scientific literature is the shift from the coral-dominated state, in which they feed heavily on the algae, and therefore create space for the coral to grow.

“This is in comparison to when there are high pressures from fishing. Fish get taken out and the algae, which is very opportunistic, grows to (the point) where the coral loses out on space.”

Because there are so many different types of pressures on the reef, Prinz believed it was important to investigate the reef and the fish community, and to determine whether organised feeding actually had an impact on Aitutaki reef.

“We wanted to see how far the supplementary feeding changes the fish assemblage, and whether the feeding is changing the ‘function’ of the fish.”

The main map provided to tourists travelling to Aitutaki, highlights fish-feeding and this helped the research team identify which spots could provide the best information.

“One-Foot Island was the first site we chose,” said Prinz. “The second was Maina, which I call a ‘non-feeding’ site, meaning that the fish in those coral communities aren’t fed on a regular basis.

“So we have a direct comparison between a habituated site and a controlled site.

“For the first part I did stationary fish visual censuses, floating on the surface, and I counted and classified every fish I saw for 15 minutes.

“I did that before I fed them, then I fed them for 15 minutes with bread and again after one hour, to have a direct control to see how the community is changing.

“For the second approach, we actually followed a single fish for five minutes, and accounted for every single bite that they did on the reef, and we did that for three species.”

The fish that were counted were classified as omnivores, carnivores, corallivores (fish that must have live coral polyps as the primary source of nutrition in their diet) and herbivores.

“What we found at the feeding sites was a substantial increase during feeding. At the most established feeding sites, the number did not drop after feeding.

“In the non-feeding sites, we had a steady increase. There was a little bit of an increase in the abundance of fish and the number of individuals, and one hour afterwards there were even more.

“So they may have just been slow to the uptake with the feeding. What was particularly interesting was to look at the diversity (of the fish). Tourists want to see lots of different, brightly-coloured fish at the sites they visit.

“However, the significance here is that during feeding, at all sites we had a drop in diversity. So I used a Shannon Index which can be used to characterise species diversity in an ecological community).

“At the feeding sites, during a feeding session there is an increase in carnivorous fish. So even though we were feeding bread, the carnivores were attracted the most

“Whereas in the non-feeding sites, there wasn’t much of a difference between the before, during and after period.”

It was found many of the smaller fish were quite territorial, and the fish that were found in one area wouldn’t necessarily be found in a different coral community, meaning that impacts were localised.

However, that brought up an issue with an apex predator, the giant trevally.

Although the locals and the tourists are fond of them, they aren’t normally found in the lagoon, but they began to associate the noise of the boat with being fed.

“The maximum amount of trevallies around the boat when we went to the feeding site was six,” said Prinz. “And they can be pretty scary, although people do go in the water with them and snorkel.

“But I saw a photo recently of 11 trevallies. Eleven of these top predator fish inside the lagoon, every single day. And it would be really interesting to see if we can “de-adapt” them.

“When looking at our herbivore representatives, they didn’t really feed on the bread. That’s in contrast to the corallivores. These were highly habituated. They really liked feeding on the bread, so they were already in the vicinity when the feeding started.

“In the case of the carnivores, there was no significant difference feeding on the bread, no matter whether they were used to it at the feeding sites or non-feeding sites. So these three representatives showed really different ways of reacting to the bread.”

One of the purposes of the bread-feeding was to see if it diminished the fishes’ appetite for the natural substrate, said Prinz.

An indirect effect of the feeding sessions led to the herbivore representative, the surgeonfish, reducing the amount it ate during the feeding period.

That effect took place in both the feeding and non-feeding sites, so Prinz speculated that the large group of fish and subsequent feeding frenzy may have been a deterrent.

“That could either be a short-term avoidance. If they don’t like the frenzy, they could stop what they’re doing and maybe come back after.

“If that’s the difference in the long term, we don’t know yet. But that could potentially be an issue if they start leaving the different places.

“In summary, we could see that bread feeding increased the abundance in the feeding sites significantly, and also during feeding we could see a drop in species richness, in contrast to what we thought.

“And looking at the different functional groups, there was an increase in carnivores, during the feeding, with the bread being the direct reason they were attracted.

“The omnivores, the sergeant fish, are opportunistic feeders and they were over-dominant in one of the most established feeding sites at One-Foot Island.

“They showed rapid habituation, and in other papers that I’ve read, they have been found to dominate the fish community to some extent.”

The team organised a questionnaire in an attempt to assess what locals and visitors thought about fish-feeding.

One hundred and four questionnaires were handed out, and 52 Cook Islanders returned the form, with overseas visitors filling out the other half.

“The general perception was that fish feeding was regarded as a positive by Cook Islanders, whereas the visitors tended to look at it less favourably,” said Prinz.

“When I asked, ‘do you think that could potentially change the marine environment in some way’ we had a general agreement that there was no statistical difference between Cook Islanders and overseas-born, (respondents), as mostly people thought the answer was ‘yes’.

Prinz said the final question asked was if they thought the fish-feeding should be continued, or stopped.

Most Cook Islanders thought it should be continued, and the reason for that was tourism, she said.

“Whereas most of the overseas visitors said that it should stop, as there might be an effect on the environment, on the fish themselves.

“We found an increased awareness of the potential harm to the environment, particularly in overseas-born visitors.

“It doesn’t mean that feeding should be stopped straight away, because that isn’t something that can (easily) be implemented. But it is really interesting to see that tourists, who this activity is aimed at, deem it superfluous.”

Prinz says if the fish were no longer being fed, introducing more of an education aspect to lagoon tours and bringing more science into the discussion could be helpful.

“I hope management (of the boat tours) can be guided to reduce feeding, or move towards something to preserve the marine life, and that the Cook Islands can highlight awareness about the environment.

“There has been a reduction in plastic straws for example, so I can see the Cook Islands as a role model, particularly for other tropical locations.”