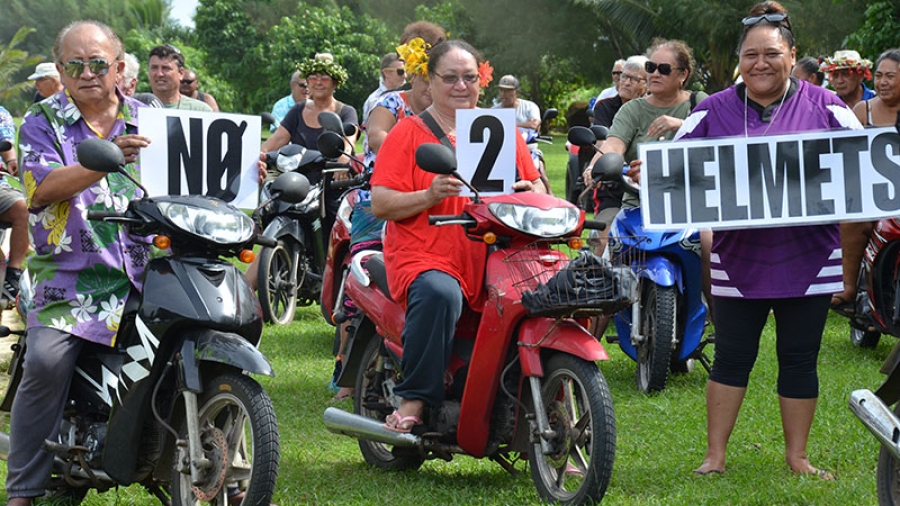 A top MP is standing firm on her decision to support the compulsory helmet law for all motorbike users.

Tina Browne, the Opposition Democratic Party leader, says she will not support a repeal of the law passed in March this year.

* Norman George: Our islands of opportunities and potential

* Up for the challenge

Her comments come after last Friday’s motorcycle rally protest where the demonstrators called for a repeal of the compulsory helmet law which comes into effect on June 26. They are in support of the law, which make helmets compulsory for motorcyclists between 16 to 25 years.

Browne alongside Titikaveka MP Selina Napa were the only Opposition MPs who supported the new law.

The majority of support came from government led by Prime Minister Henry Puna who spearheaded the campaign.

PM Puna was not available to comment on the rally protest and the drive to repeal the incoming law.

Ben Ponia, the chief of staff at the Office of the Prime Minister, said they had other pertaining issues to look into.

Ponia said he needed time to discuss the issue with PM Puna before making any comments.

But Tina Browne said she would stand firm on her support to make helmets compulsory for all motorbike users unless she “would first be persuaded that I made a mistake in supporting the amendment”.

She added that she may not oppose the appointment of a parliamentary select committee to examine all the safety issues.

“I can only speak for myself. Selina will no doubt speak for herself. Other Opposition MPs were entitled to vote as their consciences dictated and most of them voted against, which is fine,” Browne said.

“This was the case also for the government MPs who voted according to their conscience. I believe two did not support the amendment.”

Prior to the amendment being tabled in Parliament, Browne had made it publicly known that she would support compulsory helmets.

“My vote in Parliament therefore should not have come as a surprise. I agree that alcohol and speed contribute to accidents on our roads. These two issues need addressing now,” Browne said.

“A helmet, in my view, will save a life. That remains my view. I voted for what I considered was in the best interest of our people even at the expense of inconvenience to some.”

Moana Moeka’a, the leader of the AAA No 2 Helmets movement which held the protest rally, said only four Rarotonga MPs voted for the compulsory wearing of helmets in Parliament on March 25.

Moeka’a also noted the provision to wear a helmet in the islands outside of Rarotonga will only apply by order in executive council on the advice of the individual island governments.

“Many who represent outer island constituencies - towed the party line during the vote, knowing that there is very little, or no, chance of compulsory helmets being legalised on their own home islands. It is highly unlikely that the island governments will push for the wearing of motorcycle helmets,” Moeka’a said.

“Probably the most displeasing thing about the process that day was that while the Immigration Bill (which was tabled on March 25) was sent to a select committee, the Transport Amendment was not.”

Crown Law office and the Office of the Prime Minister had not responded to questions on the issue before deadline.