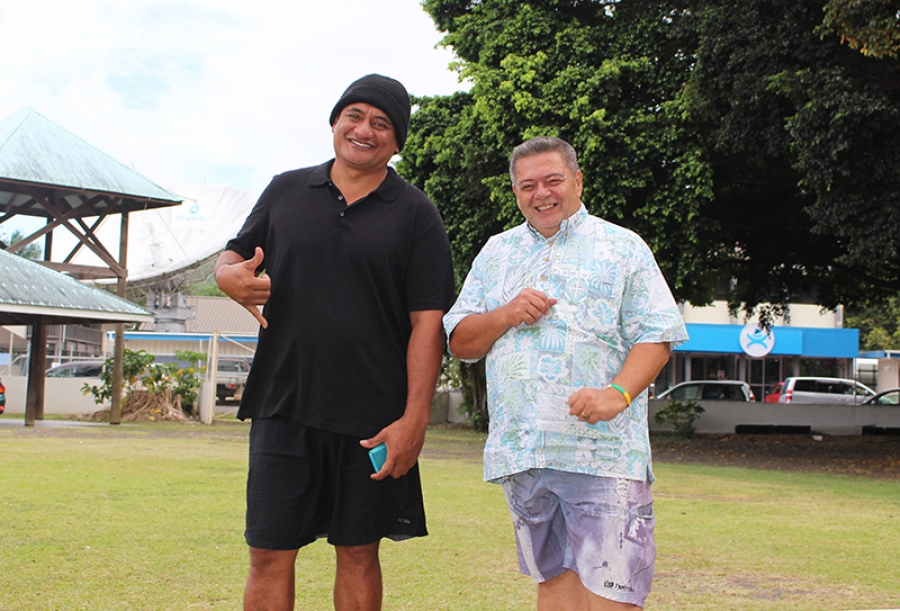 Dr Teina Rongo and William Framhein are fired up for their inaugural Christian Music Festival, “Kinura Tapunui” to be held at Te Atukura grounds next month. 18111319

A VIBRANT Christian music festival aimed at getting "lost" youths off the street, out of nightclubs, away from criminal activity and back to church will take place on December 15 at Te Atukura Grounds (Office of the Prime Minister) in Avarua.

The Kinura Tapunui Music Festival is the brainchild of Matariki FM’s director William Framhein and will be represented by all churches on the island.

He says over the last few decades there has been a noticeable erosion of values and attitudes among the youth on Rarotonga, thanks to various cultural shifts.

“Less family time spent together, more social media influences and technological distractions as well as increased temptations from the ‘clubbing scene’ where alcohol and drugs are present.”

Framhein hopes and prays the festival will draw youths without direction onto a meaningful path leading them, not only a better moral understanding, but also ultimately to their salvation.

He adds“Tapunui”refers to a state of being holy or sacred. Psalms 98: 5 reads ‘Sing unto the Lord with the harp; with the harp, and the voice of a psalm.’

“This verse embodies the goal of the festival, which is to praise the Lord through music and singing.”

The timing of the festival is also to celebrate the “reason for the Christmas season” - Jesus Christ, says Framhein.

The nine-hour free-entry festival is a non-denominational Christian event, alcohol and smoke-free, with lots of fun activities for the whole family.

Activities and entertainment will include arts and crafts as well as food sales during the day for the Christian youth groups represented to fundraise for their churches.

For the smaller mokopuna coming along there will be face painting, a bouncy castle and activities with CIFA.

Music groups will perform from early afternoon from 1pm until 10pm.

There will also be inspirational guest speakers communicating to the heart of Frenheim’s message of promoting family and Christian values.

Festival co-organiser Teina Rongo of Kōrero o te ‘Ōrau says being involved with a youth group’s performance and festival will provide a safer environment for kids. He adds one problem in Rarotonga is a lack of activities for youth.

Having to prepare their own unique Christian performance items for the event, and to present them in front of other churches from all the tapere will hopefully bring a competitive spirit, says Rongo.

He also saw the potential for a Christian music festival when he visited the Mauke Youth conference.

“When the music comes on, you see all the mapu charging off… dancing.”

Framhein says there will be no entry fee as they hope that costs to host this festival will come from donations and sponsorship.

He says it will be a “tight squeeze – so get there early”.