Island sure has changed in 45 years 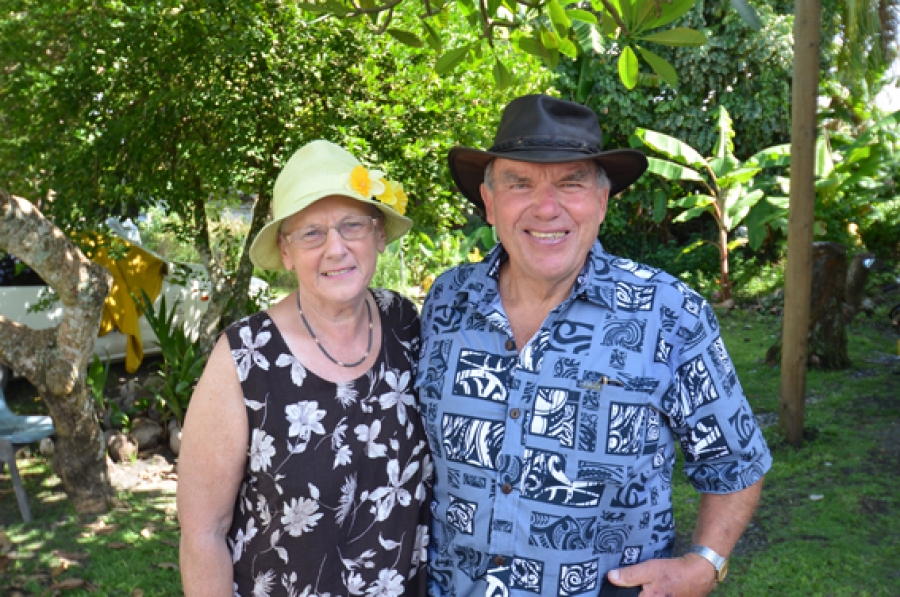 Judith Cotton (left) and her husband John Cotton (right) visited Rarotonga for the fi rst time in around 45 years and found the changes “astonishing”. 17041214

New Zealand couple returned to Rarotonga for the first time in nearly 45 years earlier this month, and was surprised by how greatly the Cook Islands had changed.

It provides an interesting glimpse into the somewhat minimalistic but affordable way of life on Rarotonga in the ’70s.

The friends spent two weeks in paradise, horse riding, dancing and dining with then premier Albert Henry and his wife Elizabeth.

Travel to Rarotonga was exciting and new to New Zealand residents in 1974, when Rarotonga International Airport was opened by Her Majesty Queen Elizabeth II.

“Rarotonga, in the Cook Islands, is the Pacific’s newest holiday destination. It came on to the jet routes only last December, with DC-8 services from Auckland, New Zealand and on a modern version of the famed flying-boat “Coral Route” providing weekly connections through Rarotonga from both Fiji and Tahiti,” the Air New Zealand pamphlet reads.

And tourism today is certainly not what it was back in 1974.

According to the 1974 Air New Zealand pamphlet, there were around eight hotels and motels on Rarotonga.

A look through the 2017 Cook Islands telephone and business directory shows over 120 forms of accommodation now available on the island – and that doesn’t include all of the island’s rental homes.

Cotton and Beech stayed at what was then the newest and largest hotel on the Island, Trailways, now known as Club Raro.

“It was so new that sometimes we would return home and find a new item of furniture (in the room). It was very exciting,” Cotton said.

Cotton and her husband were astonished at the amount of accommodation now available to tourists here on Rarotonga, and totally amazed at the variety of activities on offer.

“When Barb and I were here you basically had to entertain yourself. There were only a handful of things you could do: go dancing, or go to the pictures, and the beach. Whereas now there is so much you can do!”

Cotton believes Rarotonga appeared to be “more friendly” back in 1974, which isn’t too surprising given the fact that the island now has over 140,000 visitors a year.

“We used to walk everywhere, as did everyone. You’d be walking along and locals would stop and say, ‘Hi’. But now, everyone just whisks past you on their scooter. You don’t really interact with locals unless you’re buying something now,” Cotton said.

On the positive side, she found many aspects of Rarotonga have vastly improved.

Though many locals would probably disagree, she reckoned the roads around Rarotonga are in better condition than they were back in 1974, as is the lagoon.

“Over 30 years ago we were told the lagoon was looking a little groggy, but we visited the other day and it looks just as beautiful, if not more so.”

Inflation since the 1970s has of course made a huge difference to prices with the information pamphlet listing the most expensive single hotel room at just $13.50 a night.

A full meal at one of the few restaurants on the island in 1974 would have put you back around $2.75, and it would have cost an extra 18 cents for a Steinlager beer.

If you preferred four-legged transport, you could always opt to visit Taylors’ Tours Ltd in Titikaveka and hire a horse for $2.00.

“Natural” is the word Cotton uses to describe how she felt about Rarotonga in 1974.

“Everything felt a lot more natural back then.

“Now everyone is on their phones and too preoccupied to take a moment and appreciate that they are living in one of the most beautiful places in the world.”

However, it seems that while 18 cent beers are a thing of the distant past, Rarotonga largely remains the paradise it was in 1974.

There are just lots more tourists – and not a horse stable in sight.