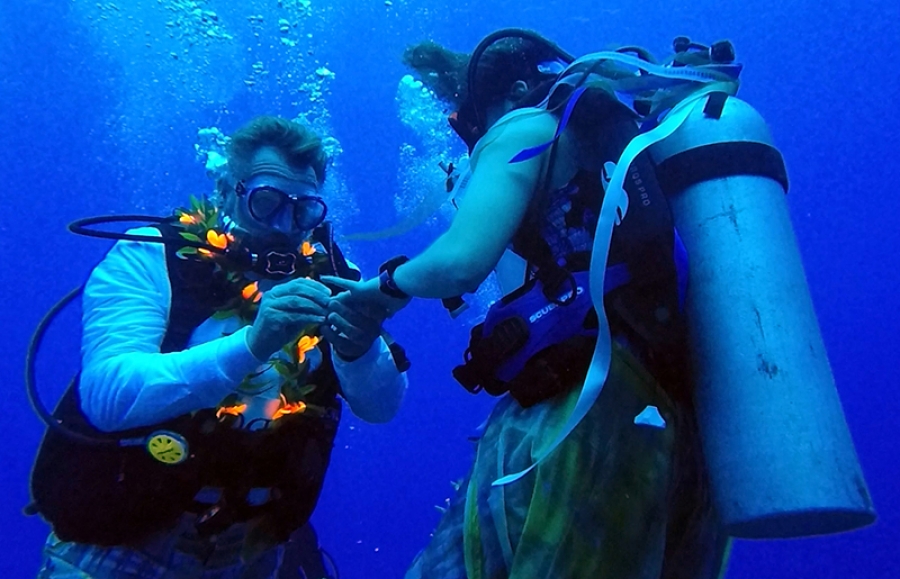 Lincoln and Lamya Mail's wedding last Saturday was certainly out of the ordinary. The diving enthusiasts held their ceremony underwater, in what is believed to have been a “fi rst” for the Cook Islands. They are pictured here exchanging rings at the reef drop-off while Master of Ceremonies Ben Vakatini looks on. 18072508

In a first for the Cook Islands, PADI instructors Lincoln and Lamya Mail were married on Saturday - with a ceremony held underwater.

The watery wedding was organised by Pacific Divers and conducted outside Avarua harbour on a sandy sea bottom surrounded by corals and fish, and attended by fellow divers.

The pair met while Lamya was completing her professional diver training last year in Rarotonga and after a stint back in the UK, she returned to marry local resident Lincoln, who had meanwhile also gained his PADI instructor qualification.

“Diving has become their shared passion and it was our pleasure to help Lincoln and Lamya realize their dream of getting married underwater” says Stephen Lyon of Pacific Divers.

Fellow instructors Ashley Cota and Selina Shariff took up the roles of groomsman and bridesmaid, while Ben Vakatini was Master of Ceremonies underwater.

The ceremony included all of the formalities of a standard wedding ceremony, with the vows being written out for each other to read.

After proclaiming “I do” by showing a flash card to each other and to the witnesses, the pair swam out to the drop-off and exchanged rings.

Pacific Divers welcomes enquiries from couples who are looking to renew their vows in a unique underwater setting, or indeed, to tie the knot underwater, says Lyon.

“We are even thinking about teaching ‘G-Dub’ to dive so he can officiate underwater” says Lyon.