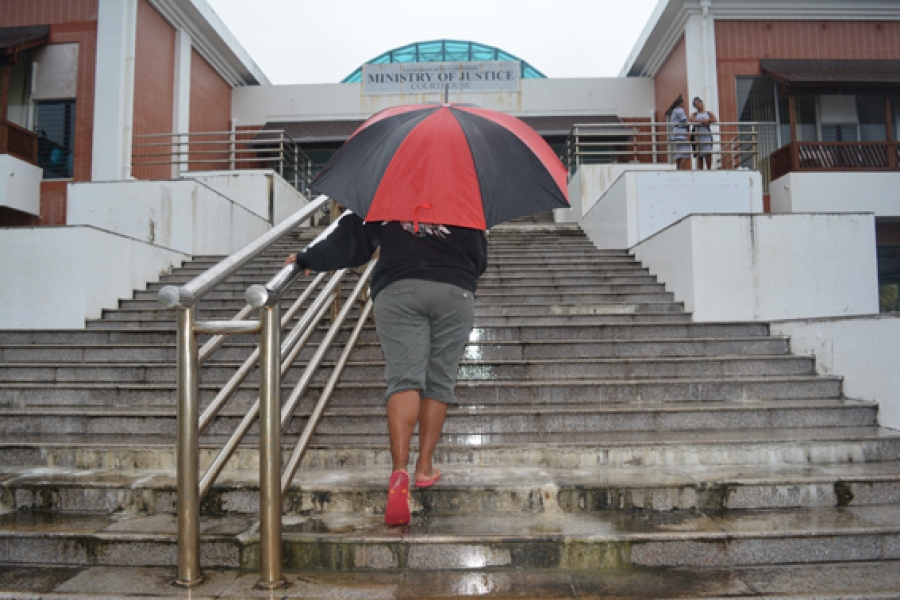 In wet weather, the steps leading up to the High Court pose a danger to the lives of those who visit the court daily. 16032322

The poor state of the Ministry of Justice building is endangering the lives of the many people who visit the courthouse each day, as well as making it almost impossible for the elderly and disabled to negotiate the long flight of front steps.

The building, which was constructed by Chinese workers and opened in 2004 appears to have ignored conventional construction standards and has deteriorated markedly.

Of particular concern is the steep flight of steps leading to the entrance and foyer. Grouting is lifting out of the steps causing water to pool on them when the weather is wet, making them dangerously slippery. The area at the top of the steps is also slippery in wet weather, as is the foyer, where water also gathers.

In spite of the problems, no warning signs are posted by Ministry of Justice staff.

The danger was highlighted two weeks ago when local lawyer Brett Gibson slipped on the steps during wet weather and broke his arm, requiring two-hour surgery at Rarotonga Hospital.

CI News subsequently received more complaints about the slippery steps and difficult handrails. Some commented on how difficult it is for older people to walk up the long flight of stairs, even when the weather is good.

Cook Islands Investment Corporation (CIIC) chief executive Tamarii Tutangata says the corporation is aware of “maintenance issues” in the building and is taking action to remedy them.

He said the courthouse is wide open to the salt-laden sea air which has had a detrimental effect on the building.

“Some of the materials used were unsuitable for our climate, which is obvious, and we have replaced some of them and will continue to do so within the resources that are available to us.

We can say that our officials at that time should have been more careful about the materials used on the building.

Tutangata says it is easy for people to forget the fact that before the Justice building was built by the Chinese contractor with PRC funds, the Ministry and the Court were accommodated in very bad ‘temporary’ premises.

“Whenever it rained, staff had to run around with buckets to catch rainwater in their offices and during court sittings.”

He said had the PRC not built the Justice building it is debatable how much longer Ministry of Justice staff and visiting judges would have been able to endure working in such difficult conditions.

However some users of the “new” building, which appears to have been designed without taking into account architectural styles that would have better suited its location, say conditions inside aren’t much of an improvement on the old one.

Speaking on condition of anonymity, one Ministry of Justice staff member said the building had leaked for a long time and had suffered numerous construction issues including cracks in the exterior.

“The airconditioning in the judges’ rooms hasn’t worked properly since day one, which is disgraceful. And elderly people who want to come in and check land records find it really hard to access the building.

“When it opened the Chinese demonstrated a sort of chair lift for elderly and disabled people that ran up and down a handrail, but that seems to have been a disaster too.”

Meanwhile, no-one is saying when problems with the steps will actually be fixed and whether the Ministry of Justice plans to do anything about warning people when conditions are dangerous. In the meantime there have been at least two near-misses on the steps where people, including a child have almost fallen, but have been saved by people walking beside them.

Tutangata repeats the message that CIIC is aware of the maintenance that is required on the courthouse and is “taking steps” to have them fixed through government resources.

“We are working with PRC officials so that the bulk of that work can be undertaken with Chinese assistance.”.

Both the courthouse and the Chinese-built Cook Islands Police Service building have suffered ongoing problems, with the estimated cost of repairing them properly running to more than $800,000.