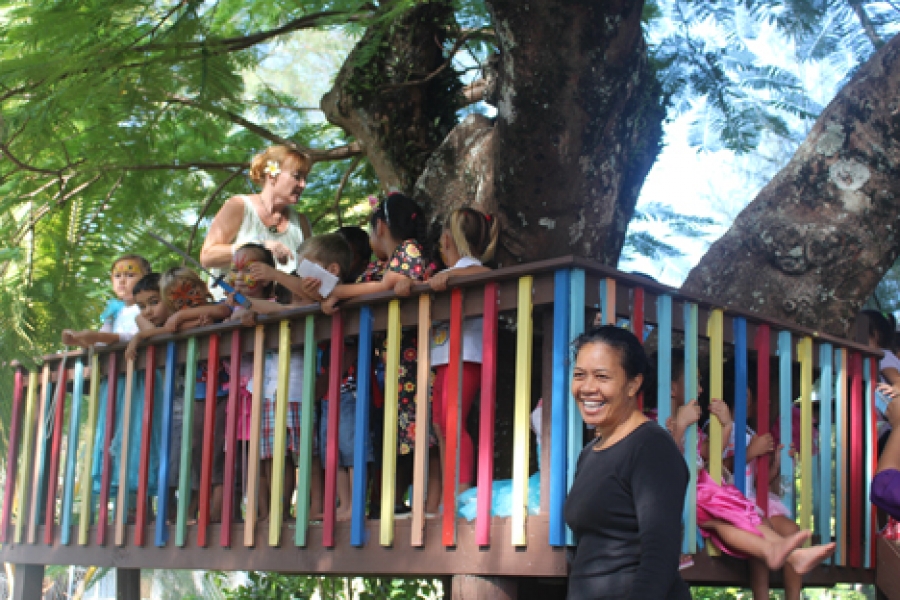 Everyone had a mighty good time at Blackrock early childhood centre on Friday.

Blackrock, the country’s first and oldest early childhood education centre, celebrated a number of milestones last Friday with a shared ‘feast’ and lots of fellowship.

Before the opening of Blackrock, a small group of women used to open their homes for playgroups of under five-year-olds.

Helen Henry recalls that things headed towards a bit more formality when the contractors arrived to build the new international airport, and they built a ‘social centre’ beside the lagoon opposite the golf club.

“The workers only used the building late afternoon or early evening; and as many of the employees had young families, the company offered the use of the building during the day for a play centre or kindergarten.

“The parents provided small tables and chairs, blackboards and other essential items. Everything was on a volunteer basis. Mother-helpers arrived early in the morning and set up the play areas in the hall. At the end of the session everything was packed away in a small storage area.”

Helen said that before long the play centre was well established and with a growing number of children attending, the organising committee lobbied the government for a permanent home.

The upshot was that the present coral limestone colonial cottage – one of two on the radio farm site, was made available and it became the first government-supported play centre.

Initially the staff were New Zealand trained play centre and kindergarten teachers, the wives of expatriate contract workers, who volunteered their services. Volunteer mothers supported them.

The centre was knocked into shape with parent working bees and fundraising, and a toilet block was built along with the outdoor playground.

Blackrock became the model and training ground for other pre-school facilities attached to village schools around the island. Local women trained at Blackrock and then went out to the village pre-schools.

The value Blackrock provided was acknowledged with a small annual budget from the Education Department although back then, as now, parents also pay a small fee.

Lady Henry – the wife of former Prime Minister Sir Geoffrey Henry – was the first Cook Islander to qualify as a play centre principal and administrator, and she held that position at Blackrock for many years. She is very fondly remembered by her former charges.

Present principal Stephanie Puiri has just notched up over 10 years at Blackrock Apii Potiki and that was one of the milestones celebrated last Friday. Along the way she has graduated from the University of the South Pacific with a Diploma of Teaching Early Childhood Education (ECE) and is studying for a Bachelor of ECE.

Aunty Mavis Brothers started working at the centre in 1997. She had a short break along the way, but she too has undergone ECE study and has a Certificate in Early Childhood Education and is also working towards her degree qualification.

Aunty Raven Samatua began working at Blackrock straight out of high school and is also a qualified ECE teacher and undergoing more study towards her degree.

And Aunty Hayley is a popular new addition to the staff, bringing a much-valued nursing background.

Parents brought along a mountain of food for Friday’s lunch, ranging from very healthy fruit and sandwiches to reasonably decadent cakes. Prime Foods also donated some child-sized sausages, which were barbecued on-site.

The morning included the worldwide premier of Blackrock’s own movie produced by Eric and Ira Gamez, which featured video from their drone-mounted camera.

Blackrock has 34 under-fives on the roll and this term has extended attendance hours for pupils from 8am to midday, to a 2pm pick-up for parents who prefer to have their children stay on longer. About half the children have moved to the new arrangement, with the other 17 still being collected by their parents at midday.