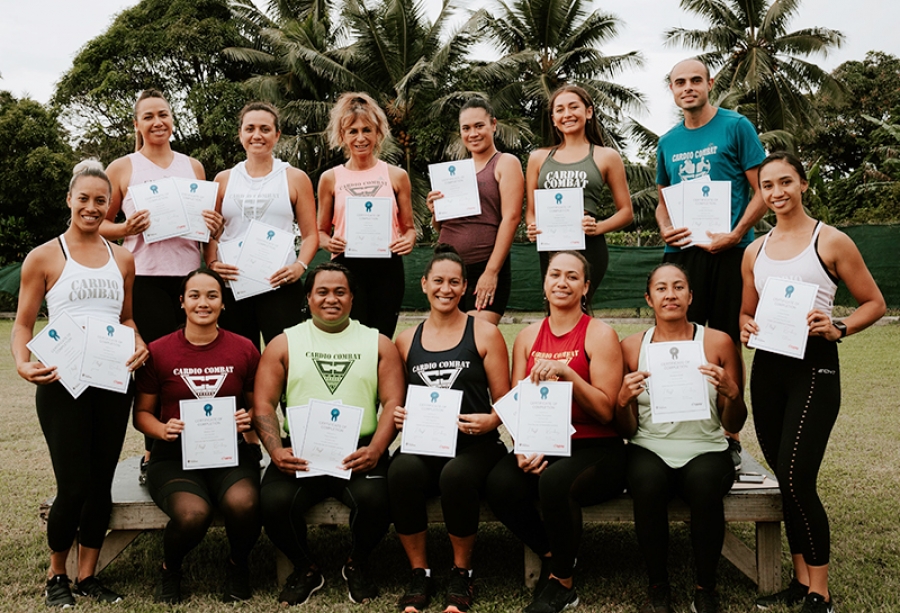 Cardio Combat members with their certificates. 20071906

It’s hard not to break into a sweat just watching people work out during an intense Cardio Combat session.

Cardio Combat has grown in popularity and is one of the biggest fitness groups on the island, consistently delivering to between 20 to 80 people per class at various venues.

On the Cardio Combat Facebook page, numbers have reached over 1500 and they have featured in Cook Islands News a few times this year with regards to development of classes around Rarotonga, most recently at the Avatiu Swamp grounds with Luciana Nicholas.

Community health and fitness is at the heart of what they do and this week Cardio Combat member Ani Thompson announced the Arorangi trial month, which is free to the community.

The Arorangi trial month starts today and Thompson said they are encouraging everyone, not just Arorangi residents but anyone who finds the time slot of 5pm more convenient.

Should the trial month prove successful, Thompson said they will commit to Cardio Combat classes in Arorangi.

“In saying that we offer more than just cardio as we incorporate weight training and circuit training as well,” she said.

“This is all delivered under the watchful and athletic eye of our founder and head instructor Luciana Nicholas who recently won the Women in Sports Achievement Award last May.”

Nicholas and Thompson met with the Puaikura Recreation Centre facility manager and secretary, Teina Heather who has given the go ahead to support health and fitness in Arorangi.

“She, like us is very excited to see this happen and hopefully people take advantage of the convenience of the new location,” Thompson said.

“We look forward to seeing everyone on Monday at Puaikura Recreation Park at 5pm.”