A Brit on a mission, in country number 51 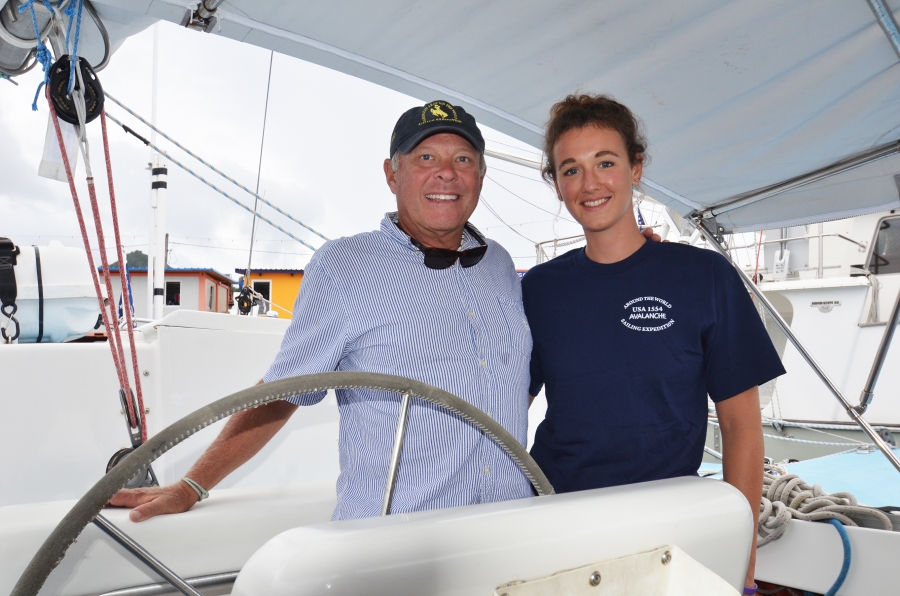 Around-the-world adventurer Phoebe Howlett and skipper John Barry behind the wheel of the trimaran Avalanche, which brought Howlett to the Cook Islands from French Polynesia. 18071017

British woman Phoebe Howlett is on a mission to visit all 197 countries in the world, and right now she’s in the Cook Islands.

We’re number 51, in case you were wondering.

Having arrived in Rarotonga early last week after a two-day sail from French Polynesia, Howlett has been doing and seeing as much as she can around the island before heading off to Aitutaki and Suwarrow.

From there she will make her way to Samoa, the next country on her itinerary.

Brought here by the 54-foot trimaran Avalanche, skippered by American John Barry, who Howlett met “on a tiny little atoll in French Polynesia called Maupihaa”, the 25-year-old has been travelling the globe for well over a year now.

She’d already previously been to 23 countries when she properly began her world tour 15 months ago in South America, and now has 146 to go.

As if simply visiting every country in the world wasn’t enough, Howlett is also determined to spread awareness about long-term chronic illness and gender inequality as she goes.

Four years ago she was diagnosed with not one but two debilitating chronic illnesses. Doctors told her she would never again lead a normal life and that she would just have to “get comfortable” with that fact.

Refusing to take this news lying down, Howlett left her investment banking job in London and returned to her parents’ home in the English county of Nottinghamshire to set about making a recovery.

“I changed my diet, I changed my lifestyle, I changed absolutely everything,” she says. “I gave up sugar, alcohol, social life, boyfriend, normality, job – everything to try and get healthy again, to see if it would work. And it slowly did.”

To the surprise of her doctors, Howlett eventually made a full recovery over the course of a year and a half, beating the illnesses that at one time had her passing out in the street and left unable to walk.

“But as I was getting better, the one thing I didn’t want to do, after all this experience, was to just go back and start making money for rich people once again,” she says, explaining how the idea of her epic journey first started to germinate.

“I thought I’d go and travel for six months, down in South America. And everybody that I told was like, ‘Oh, you’re going by yourself?’ Of course I’m going by myself! I’ve just recovered from two illnesses that I wasn’t meant to recover from – by myself.

“But it got me thinking, why are people saying that to me? Why do they not think that I can do this after what I have just been through?”

Frustrated at people’s reactions, Howlett did a bit of research and found that only 54 people have ever travelled to every country in the world. And only one of those travellers was a woman.

“So I decided to set myself the challenge of travelling to every country in the world,” she says.

So far Howlett has visited most of the South American continent and has put a fair dent in the South Pacific.

Along the way she’s eaten fried crickets in Mexico, been escorted out of town by police in Colombia, and found herself temporarily stranded in the Marquesas Islands.

The longest she’s stayed in one place was three and a half months in Colombia, while her briefest sojourn was a three-day stay in Paraguay – something she describes as “really frustrating”, but unavoidable as she had a flight to catch.

Howlett says the one thing she didn’t want to do was treat her journey like a checklist, ticking off countries as fast as she could make her way through them. That’s unlike the only woman to accomplish the feat so far, who visited every single country in just a year and a half.

Looking ahead, Howlett admits to being particularly excited about the Middle East – Iran, Saudi Arabia – despite the fact that there are still several countries in the region that, as a female, she is not legally allowed to enter unless accompanied by a male chaperone.

As for her time in the Cook Islands, Howlett says she has “absolutely loved it”.

“I thought you couldn’t top French Polynesia, but this is beautiful. Geographically it’s like a merge of the Marquesas and Tahiti together, because it’s got the beautiful water of Tahiti, but then it’s got the volcanic, jutting rocks like the Marquesas. It’s awesome.

You can follow Howlett’s journey – and find out more about who she is and what she stands for – on her website at www.thechanceofchoice.com.