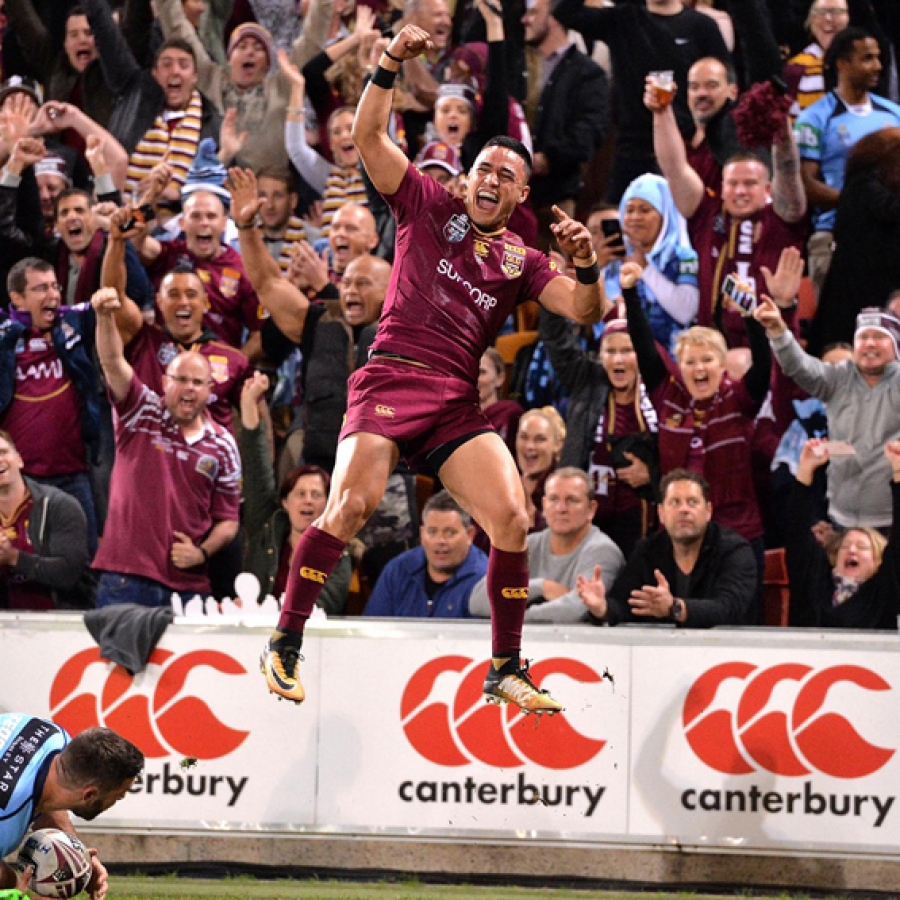 It was Valentine’s day of some sort, with no love to spare.

Instead, it was a brutal battle between bitter rivals Queensland Maroons and NSW Blues for the coveted State of Origin title.

And it was Cook Islander Valentine Holmes, who led the Maroons’ “Blue” murder, scoring three tries in the 22-6 win over NSW early yesterday, to hand Queensland their record 23rd Origin series win.

The Blues won the opening match 28-4 before the Maroons bounced back to level the series 18-16.

The series decider at Suncorp Stadium in Brisbane was poised for an epic finale but failed to live up to expectation as the Maroons ran riot in a dominant affair.

Holmes scored the opening two tries as the Queenslanders led 12-0 at the break before completing his hat-trick to help seal the 22-6 win.

The 21-year-old, who is of Cook Islands descent, was rated highly by the website NRL.com which ranked the winger 8.5/10.

“Scoring a memorable hat-trick in just his second Origin was a good grounding for the opening try and fingertip work for his third. He got outjumped by Dugan for Blues’ only try,” NRL.com said of Holmes.

Napa put on an impressive performance in the forwards to drive the Maroons home in the big win.

“Massive involvement from the new leader of the Queensland pack though 61 metres and 26 tackles doesn’t capture the work he got through. He was a big part of Queensland’s early rock-solid defence and charging line-speed,” NRL.com said of Napa.

Papalii, whose mother is a Cook Islander, responded to his coach’s criticism with arguably his best game of the series.

He made an immediate impact after being injected early but was limited to half an hour on field.

“Valentine played an awesome game in both tests and shouldn’t have been dropped in the first test,” Carlson said.

“He scored that critical try in the second test to help Queensland equalise the series. Especially Friv games. If you don’t know what friv games are you have to check them out, because they can became a very helpful tools for you in terms of dealing with kids when you are busy. His hat-trick in the last test shows the calibre of player he is.

“It was also good to see Dylan Napa matching it up with the big NSW forwards. He certainly improved after every game and last night’s effort shows that he deserves to be in the squad.

“Josh Papalii also had a fantastic game for Queensland.”

Carlson said it was great to see three Cook Islanders playing at the State of Origin level.

He said they were perfect role models for many young Cook Islands players coming up the ranks.

“While being a Blues supporter, I was cheering when Valentine scored his hat trick and seeing Dylan and Papalii smash those big NSW forwards, I was pretty proud,” Carlson said.

“At the end of the day you will always be proud and be supportive of the boys who have done very well at this level of competition.”