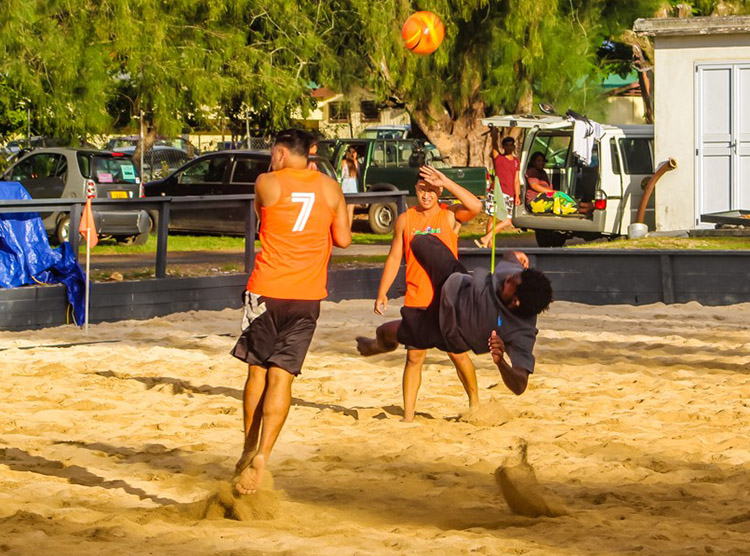 The Ladies in Black retain their lead in the women’s Beach Soccer Tournament after a smashing win on Saturday.

Last Saturday, the Wantoks went head to head with the previous open men’s division leaders PFC Guyz. The much-anticipated clash was the final match of the day.

PFC Guyz were first to score giving them some good momentum in the opening minutes of the game. Wantoks eventually caught up and both teams replied with a goal each until the scores were locked at 2-all.

Wantoks picked up the pace in the second half and went on to score two more goals giving them a comfortable 4-2 lead.

PFC Guyz were short on time but managed to get one last goal in before the hooter sounded. Wantoks took the lead from PFC with the 4-3 win.

In the other men’s matches, Titikaveka Blue Balls defeated Matavera FC knocking them off the second place and moving up to third. Nikao Sokattak got their first win of the competition when they took on the mighty Black Wolves, winning 3-2.

The game looked to end at 2-all draw before a penalty kick in favour of Nikao Sokattak gave them the edge they needed.

The young PFC Boyz team also had a taste of victory on Saturday as they defeated the MC Stallions 4-1.

The Ladies in Black retain their lead on the points table after a smashing victory against the Vibers 5-0.

Sister club PFC Galz were not so lucky in their match against Titikaveka Blue Blazes. The Blazes defeated the young team 4-1, bringing an end to the women’s matches for the day.

This afternoon the top two women’s teams, Ladies in Black and PFC Maidens, will go head to head to see who will take the lead in the open women’s division.

Following that game PFC Guyz are set to take on the Matavera FC team to kick off the men’s games. The side will be hoping to get to winning ways after suffering their first loss last week.

Team Wantoks will be taking on Titikaveka Blue Ballz in the final match of the day.