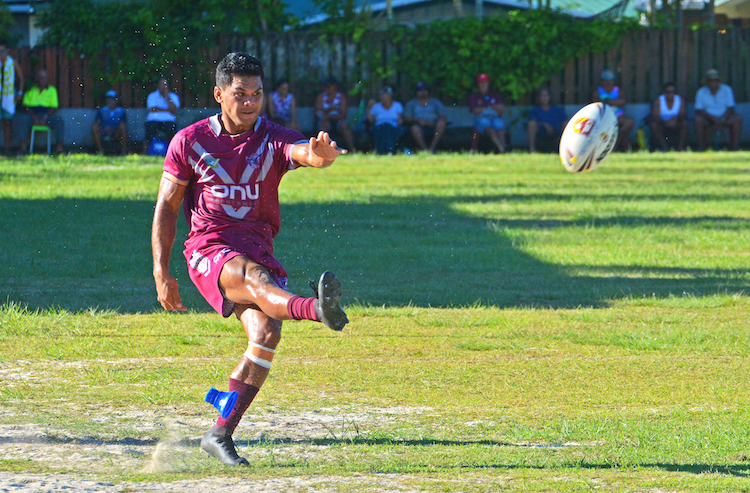 Ngatangiia-Matavera Sea Eagles' Daniel Toa was instrumental in his side's win over the Sharks on Thursday. 19040831

In what was an intense tit for tat match, the Ngatangiia Matavera Sea Eagles came out the soaring victors in Thursday's premier match game.

The Sea Eagles defeated Aitutaki Sharks 30-28 in a close battle at The Swamp.

The side scored first through a try by Mikaele Leawere. Daniel Toa successfully kicked the conversion to give the side 6-0 lead.

The Sharks answered back with a try of their own through hard running William Howard coming off a backdoor pass from strong and mobile Jedrick Engu. Sharks’ Leo Roa successfully converted the try to level the match 6-all.

The defending champions Sea Eagles extended their lead by taking advantage of a penalty with a quick tap and play by Ngamata Miriau to put points on the table.

Sharks retaliated through fleet footed Edward Nicholas who managed to twist and turn to score over two defenders equalising the score once again to 10-all. With Sharks Leo Roa successfully converting this try, it pushed Sharks ahead to lead 12-10.

The Aitutaki side continued their assault with a solo try effort from danger man William Howard to extend their lead to 16-10.

But their momentum didn’t last long after two of their players were sent to bin which allowed the Sea Eagles to take advantage and score again in the corner through hitman Ngamata Miriau. With a successful conversion from Toa, the score at half time was locked at 16-all.

In the second half of the game, both teams put on a strong defence formation before Sea Eagles "Big T" Tereinga Henry found a weak spot in Sharks defence sliding down for an extra four points to extend their lead. Again Toa successfully nailing in between the "H" to put Sea Eagles in the lead 22-16.

Some ill-discipline play from Sharks resulted in the team being penalised and the frustration on the team starting to show. There would have been an advantage for the Sharks to score coming off a final kick in play from Teokotai “Billy” Tuaivi into the hands of James Tofilau, however was disallowed due to foul play prior to the try.

The Sea Eagles taking advantage of the penalties managed to capitalise and score in what might be ruled as a controversial try through Tubuna Nasilivatu in the left-hand side of the pitch to extend their lead again to 26 points. Mark “the Butcher” Tuaati scored another and Toa with the extras kept the Sea Eagles ahead 32-16.

Not to be outdone, the Sharks put on a strong performance to come back into the game with some good runs from their big man Ngarima Simiona and Richard Davey with the latter busting through Sea Eagles defence line to score for Sharks. Leo successfully kicking the conversion to close up the gap 22-30.

In another brilliant performance coming off a runaway from captain William Howard to offload to inside centre Edward Nicholas for a brilliant try in the corner. Another successful conversion from Leo Roa to close the gap 28-30. With seven minutes remaining, try as they might, the Sharks just couldn't bust through a tight and strong defence line by the Sea Eagles who held on to win 30-28.

In today’s matches, Tupapa Panthers will host Arorangi Bears with U10/12 match starting at 10.45am and premier men’s clash at 4.30pm.