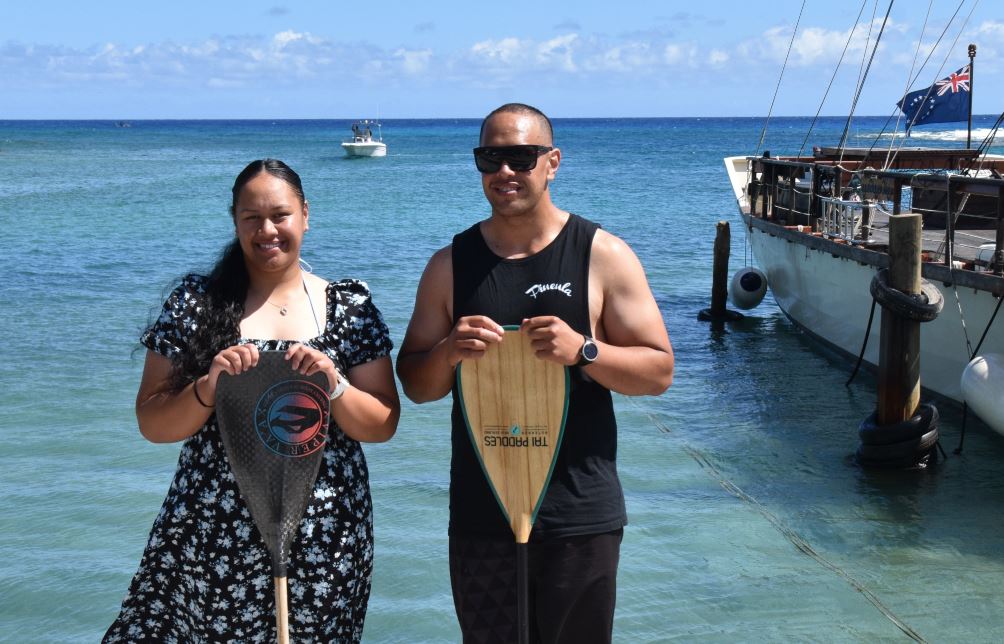 New Zealand based Cook Islanders, Inamaru Tere and her brother Teremoana Tere will compete in the Oe Vaka nationals. 22111804

Seventeen teams will be battling it out on the ocean this afternoon in the Cook Islands Oe Vaka National V6 Iron race which starts from Avarua harbour.

Two paddlers to watch out for in the Oe Vaka Nationals, which starts today, are New Zealand based Cook Islanders, Inamaru Tere and her brother Teremoana Tere.

The pair have stamped their mark on New Zealand and indeed the international paddling scene, with both winning multiple medals at national and international level.

Raised in a staunch waka ama family, the Tere siblings have paddled from a very young age.

Their father Maori Tere, was president of the Waitakere Outriggers Club, and encouraged his kids from an early age into the sport.

She first raced in the Cook Islands in the 2019 Vaka Eiva where she placed first in her division.

In this Nationals, Inamaru is competing in the V1 12k singles.

“It’s good to come back home. I love it (paddling) honestly because of the people, you meet so many people along the way, you get to travel and it’s fun,” she said.

Teremoana is paddler/coach for the Pinuela men’s crew – the winners of last year’s New Zealand Long Distance Nationals – where he also placed a close second in the singles event, and placed third in the Catalina crossing in the United States.

Last month he finished third in the Waka Ama Long Distance Nationals open men’s singles, with teammate Johnno Smith in fourth, so there will be some stiff competition in the V1 15k race on Wednesday.

Teremoana also paddled for the elite New Zealand open men’s team at the 2018 Tahiti Worlds where they won a set of medals.

Looking forward to paddling in Rarotonga and the waters of their home land, he says meeting people and racing against different crews are some of the joys of paddling.

He will be racing with his Pinuela crew in today’s V6 18k Iron race, as well as the Round Rarotonga Relay Race next Saturday.

The siblings will be on the start line in next Wednesday’s V1 ocean race which will be run over 15k for open men, and 12k for women/masters and juniors. The race will get underway from Trader Jacks at 4pm.

Teremoana and Inamaru are hoping to represent the Cook Islands at the next world distance champs to be held in Samoa in August 2023.

Meanwhile the local Strong Mums Fitness Journey women are keen to hit the water today paddling under the banner of the Live Free Canoeing Club.

The six women, Mona Rahui, Pare Tangata, Tapu Paitai, Myland Lane, Tai Cummings and Inano Matapo are excited to get together again as a team in the Iron Marathon 12k masters category today.

Myland Lane said: “We are looking forward to the race, we would like to accomplish the race in good spirits.”

President of the Cook Islands Canoeing Association (CICA), Teina Taulu said: “I’m expecting really good competition in the open men’s since we have team Pinuela here, it’s been a long time since we’ve had international competition and it’s great for our open men’s teams to see where they’re at.”

Having the international teams back including the Canadians “is really great”, said Taulu.

The public are kindly reminded to have patience, slow down and stop when the paddlers and canoes are crossing the main road at Avarua Harbour.

Everyone is welcome to watch the races which starts at 1pm this afternoon, registration starts from 12 noon.