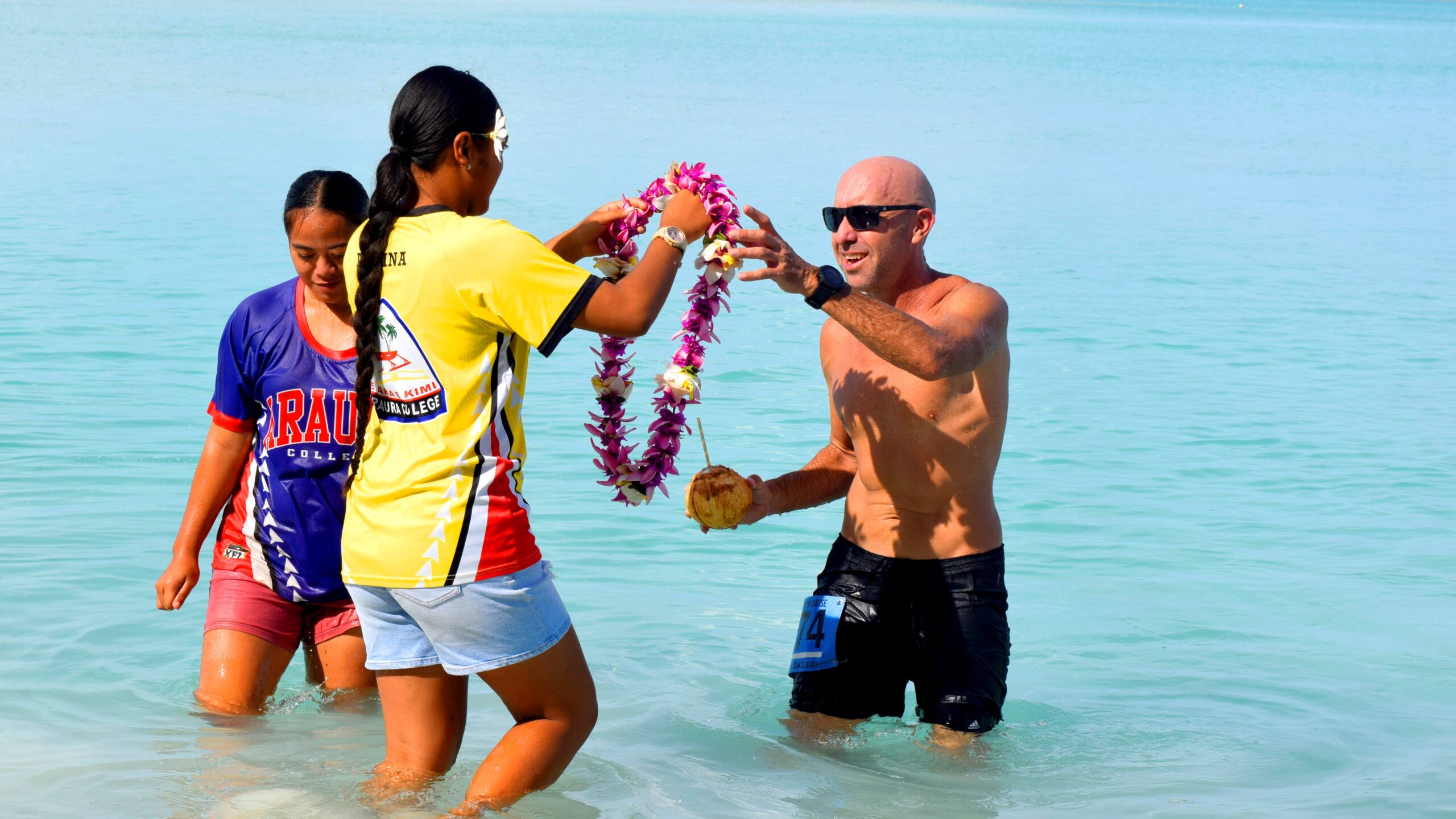 Local pilot Andrew Logan is used to flying high but this week he set himself a new personal achievement soaring to new heights winning his first ever BSP Aitutaki Marathon Pursuit in Paradise race.

His is the third local name stamped on the Pursuit in Paradise trophy in the four years it has been up for the taking.

Local woman Kelly Pick not only took out the inaugural race in 2018, she also set the course record time and remains the only female to win the race.

In 2019, Australian runner Stuart Price won the event before ‘Corona’ cancelled the 2020 Marathon which became a local only race in 2021 with borders closed leaving BSP country manager David Street to pound the coral roads of Aitutaki on his own to win the trophy.

There was excitement in the Aitutaki air with the return of Kiwi runners who didn’t travel to the island to break any marathon records – but to soak in the magic of Araura after long lock downs and tick off personal achievements like running a marathon in a tropical paradise.

A total of 24 runners lined up to challenge themselves in the 42.2km full marathon, 21.1km half marathon and 10km course.

For Rex, it was just a thrill to finally be on Aitutaki after ‘corona’ cancelled the event in 2020, while Charlene was testing out her new interest in marathon running.

In the end it was Andrew Logan that led the pack to win the marathon in a time of 4:08:43 and stamp his name on the trophy.

Second place went to Rex who also showed true sportsmanship supporting Charlene in her first race across the tough course to win the open women’s division while Kevin Henderson picked up 3rd place.

The people of Aitutaki and in particular Araura School students were the glowing champions of the day showing wonderful support running along with Charlene to encourage her through some dark stages of the race to keep going.

It was an emotional finish for the marathoner who crossed the line in cloud of cheers and embraces from the Aitutaki youth who were visibly inspired by the petit runner’s monster effort.

In the 21km race - BSP country manager David Street took the top honours although he admitted in his prize giving evening speech that he was very emotional to see the main 42km trophy leave his office that represented the sacrifices and dedication he had put into training to win the trophy.

With little training this year he entered the 21km race and prevailed in 1:51:09.

He said after the race it was no walk in the park but it was not the extreme race his 42km race was the previous year.

In second place local lad Tata (Junior) Samuel was the hero of the course never having run more than 2km before but wanting to put his recent healthy lifestyle efforts to the test – decided to run the 21km course and crossing the line in a 2:07:31. He’s now eyeing up next year’s 42.2km course.

Third equal in the 21km course went to good Raro friends Fiona Pekepo and Tarina Moorfield, both crossing the line in 2:08:15.

In the shorter 10km course the competition was even more exciting with the return of course record holder Rupeni Mataitoga who won the race again but 41 seconds off his race time last year, finishing in 42:55.

“What is it about Aitutaki and this slow time, so I’m going to have to keep coming back to Aitutaki,” said the runner originally from Fiji who is chasing a sub 40-minute race time.

In second place and impressing all was 12-year Aitutaki boy Enrique Joseph who crossed the line in 51:09 alongside David Street who was visibly impressed by the young man’s efforts.

In fact, Enrique’s older brother had won the race a few years ago and when he learned that he had beaten his brother’s time by more than 8-minutes a wide grin appeared on the face of quietly spoken athlete.

Third place in the race went to female Aitutaki fitness trainer Dani Adendorff in a time of 52:19 and still keen to better her time.

Returning Kiwi runners were thrilled to finally return to paradise with the Aitutaki Marathon event, a side bonus for them who travel to Aitutaki for her magical healing and relaxing atmosphere.

For a number of them, the past two years of lockdowns have been tough and with added healthy issues – Aitutaki was the healing tonic they needed and running the marathon a personal achievement.

In fact, a number of visitors already on the island joined the marathon the day before seeing all the promotional flags and being encouraged by fellow Kiwi runners to join the fun.

A special meitaki atupaka to the people of Aitutaki for another wonderful host of the Pursuit in Paradise BSP Aitutaki Marathon 2022 – see you next year.