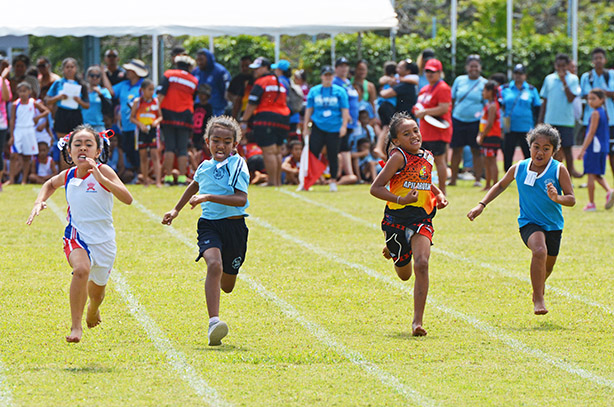 Schools around Rarotonga are gearing up for the annual Prince of Wales Athletics which will be held this afternoon and tomorrow at the National Stadium in Nikao.

Apii Nikao will host 10 other schools around the island plus pre-schoolers from Blackrock Apii Potiki in the annual event.

This year the event will be divided into two days for the first time, a new approach organised to overcome some of the delays that cause a long and tiring day for athletes.

At 4pm this afternoon, the Prince of Wales Athletics will start with the 800 metres and 1500m runs. The competition begins proper tomorrow with various track and field events.

On Wednesday there will be a rotation process for the field events where schools will be divided into clusters of three schools and be stationed at one event at a time. Girls and boys will compete at the same time separately and only nine athletes per event per station will hopefully make for a faster transition.

Ruth Mave, secretary for Athletics Cook Islands, emphasised that the new process for running the event was a pilot method and for the good of all the athletes and the event as a whole.

“It’s on trial so we are asking all parents and teachers to be patient and aware of where they need to be and have their students ready so we can run a smooth competition,” Mave said.

Additional restrictions have been introduced including young kids being supervised so they do not run out onto the track. Athletes will only be allowed to take part in four events (two track and two field), plus a relay.

Parents have also been asked to avoid going onto the field for safety reasons and to allow the events to run smoothly.

Holes in the track have been fixed by Cook Islands Investment Corporation (CIIC) and the track line marking has been upgraded by Athletics CI.

Usual delegates are invited to attend the opening and start of the programme.

CITC is the main sponsor of the day with this year being the fifth year they have sponsored the event for the benefit of the community.

“They have done a marvellous job in providing marquees, official uniform, water and breakfast and prize trophies as well as the ever entertaining George George on as MC,” Mave said.

Elizabeth Kapi, the principal of the host school, Apii Nikao, said: “Schools have been training all term and are all ready to run.”

Kapi thanked the major sponsor CITC as well as the other major sponsors and all other stakeholders including Athletics CI, Cook Islands Sports and National Olympic Committee (CISNOC) and CIIC who have been part of the preparations for this event.

“A special thank you to all the volunteers who have made time to assist us in this event. As the host school, we are just excited that this event will take place on Wednesday,” she said.