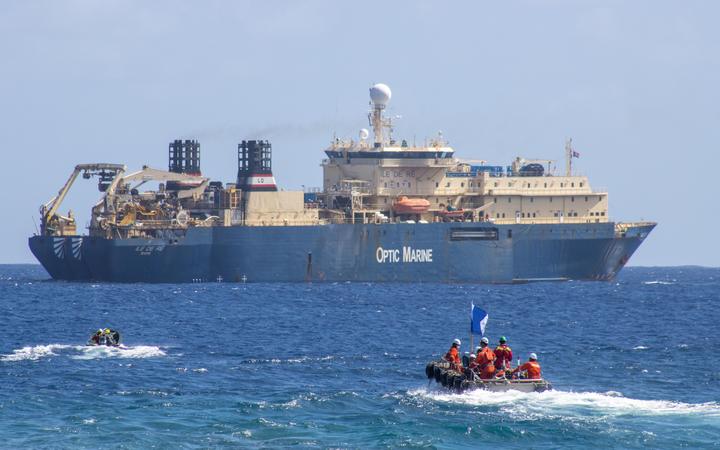 Cable workers went back and forth between ship and land to prepare the landing Photo: Elena Pasilio

On 20 September 2021 Tokelau, one of the world's most remote territories, took a significant step to becoming less isolated, via the Southern Cross NEXT submarine fiber-optic cable network cable.

On 20 September 2021 Tokelau, one of the world's most remote territories, took a significant step to becoming less isolated, via the Southern Cross NEXT submarine fiber-optic cable network cable.

The cable links the atoll of Nukunonu with Hawaii and when installation is complete it will provide all of Tokelau's atolls with faster, cheaper and more reliable internet access.

The occasion was celebrated with a uniquely Tokelauan live broadcast across the three atolls, to its project partners and the Tokelauan diaspora around the world.

The broadcast was watched in New Zealand by Ross Ardern, the Administrator of Tokelau, and in Bermuda and Australia by Laurie Miller, President of Southern Cross NEXT, and his support team. Simultaneously the programme was live-streamed on the Government of Tokelau Facebook Page.

Nearly all of the inhabitants of Nukunonu gathered at the Talikilagi Falefono (Government House), before an 86" Television screen to view the broadcast. They were joined by the Fakaofo council from Falefotu and the Atafu council from Lotala. As with all significant events in Tokelau, religion and elders are first and foremost. The ceremony opened with a prayer and then each Hauatea (elder) representing each of the three atolls took a turn to bless the occasion, via Zoom platform.

Minister for Telecommunications, Mose Pelasio said that he hopes, "these initiatives bring life-changing benefits to us all - enhancing and reinforcing our culture and economy, resolving our remoteness by linking us closer to other parts of the world, and most importantly raising our awareness and recognition in the international and regional communities."

On behalf of Tokelau, Mr Pelasio extended his gratitude to New Zealand for its continuous support and development assistance.

"I want to extend my sincerest gratitude to the Government of New Zealand for their continuous support in a herculean effort to digitize, connect, and put Tokelau in the digital world network and the Government of Tokelau for their trust and care for the citizens of our beautiful country."

"I would firstly like to recognise a twirl of so many people in Tokelau and around the world who worked to support this project, the effort required to achieve this has been particularly significant in the last 18 months as the world has responded to Covid 19 and I want to congratulate everyone for getting us to this point in a safe fashion."

Mr Ardern added that even though improved internet access will be important for Tokelau, it will also bring new risks. He assured Tokelau that New Zealand would always be there to help.

"We are expanding our support for Cybersecurity for Government and individuals of Tokelau as we are for many Pacific Island countries." The workers who pulled the cable in Photo: Elena Pasilio

In his address, President of Southern Cross NEXT, Laurie Miller, said this was a historic event for Southern Cross as well, since this was the first time New Zealand had been directly linked to Tokelau via cable. He added Southern Cross looked forward to continuing its working relationship with Tokelau.

"At the end of the project, it is our hope to not just leave the cable system but to more importantly have helped the atolls of Tokelau on your journey to be part of a more interconnected Pacific."

The project had been in the planning stages for 5 years, but construction of the underground cable tunnel and housing station for the communications technology began in 2020.

The strict border controls and managed isolation processes proved challenging for construction personnel, including the team of Samoan contractors who built the tunnel and station over the course of a few months.

A team of four workers from Southern Cross began their own managed isolation on 19 April, in preparation for construction of a submarine station. They were quarantined at the newly built Teletok station, which would allow them to spend the 2 week period setting up its machinery.

Team supervisor, Barry Miller, thanked Tokelau for taking the "great initiative" of having his workers quarantined in the place they needed to work on.

"Some of us have been to a number of countries and you lose two weeks locked away in a room when you could be productive like we were here so it was amazing to be able to have that, and we thank the people of Tokelau for that," Miller said.

The Southern Cross workers spent a month in Nukunonu preparing the station with the equipment and proper machinery to connect the submarine cable.

On 9 September the next project team arrived aboard the Optic Marine. Their task was to pull the underwater cable up onto land and into the Teletok station. This team did not quarantine, but only 8 of the 30 team members went ashore and took strict safety measures to prevent any possible transmission of Covid-19. The areas where the work took place were closed off to locals, with police keeping surveillance from a distance.

The team of 8 worked from sunrise until 4pm most days in the heat and rough sea conditions, which flipped one of their dinghies on their second last day. Although hours were lost retrieving equipment from the sea, the team managed to complete their work to schedule and departed on 17 September.

For now, the work continues, and the international cable will be connected through to Fakaofo and Atafu atoll through a domestic cable in early 2022.