US pledges to deepen engagement in the region 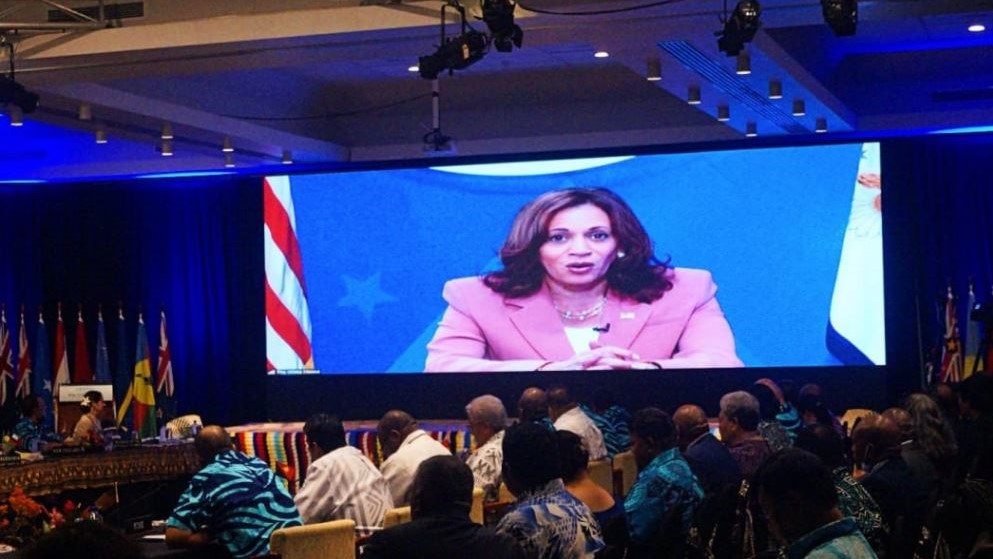 Harris joined the regional leaders on Wednesday morning to announce half a dozen new commitments to signal America's renewed commitment the region.

The commitments included the establishment of embassies in Kiribati and Tonga, tripling the funding for economic development and ocean resilience, and the appointment of the first-ever US envoy to the Pacific Islands Forum.

She said the US recognised that it did not provide the "diplomatic attention and support" to Pacific nations in recent years.

But she says that will now change.

"We will significantly deepen our engagement in the Pacific Islands. We will embark on a new chapter in our partnership, a chapter with increased American presence, where we commit to work with you in the short and long term to take on the most pressing issues that you face.

"The United States is a proud Pacific nation and has an enduring commitment to the Pacific islands which is why President Joe Biden and I seek to strengthen our partnership with you.

"We recognise that in recent years the Pacific Islands may not have received the diplomatic attention and support that you deserve. So, today, I am here to tell you directly, we are going to change that.

"In this region and around the world, the United States believes it is important to strengthen the international rules based order. To defend it, to promote it and to build on it. These international rules and norms have brought peace and stability to the Pacific for more than 75 years.

"Principles that importantly state that the sovereignty and terriotorial integrity of all states must be respected. Principles that allow all states big and small to conduct their affairs free from aggression or coercion.

"At a time when we see bad actors trying to undermine the rules-based order we must stand united. We must remind ourselves that upholding a system of laws, institutions, and common understandings ... well, this is how we ensure stability and indeed prosperity around the world.

"We will continue to work with all of you and all of our partners and allies to craft new rules and norms for future frontiers grounded in our shared values of openness, transparency and fairness.

"All of us convened we recognise there is so much we can do together. We have a strong foundation and we will build on this and embark in a new chapter - all in the spirit of partnership, friendship and respect."

Harris also said the US plans to triple funding for economic development and ocean resilience for Pacific islands.

She said a request will go to the US Congress for $US600 million.

"Sixty million dollars per year for the next 10 years. These funds will help strengthen climate resilience, invest in marine planning and conservation and combat illegal unreported and unregulated fishing and enhance maritime security."

The Forum secretary-general Henry Puna welcomed the commitment from the United States, saying it's a good sign of friendship.

"That was very refreshing and also very reassuring that the Americans are fully committed to re-engaging with the Pacific in a meaningful and substantive way."

And Fiji's Prime Minister Frank Bainimarama has commended the United States for its renewed intentions.

Mr Bainimarama said he and fellow leaders welcome policies such as appointing a desginated US envoy to the Forum.

"I think it's clear to see that the US is certainly looking more like the Pacific partner that we have traditionally held it to be. We look forward to deeper engagement to support our development and build our capacity at the regional and national level," he said.

Last year, President Joe Biden was the first US president to address the Forum Leaders, which was followed up by a visit to Fiji by the Secretary of State Antony Blinken to launch the America's Indo-Pacific strategy.

Harris said Washington plans to build on this foundation in the months and years ahead.