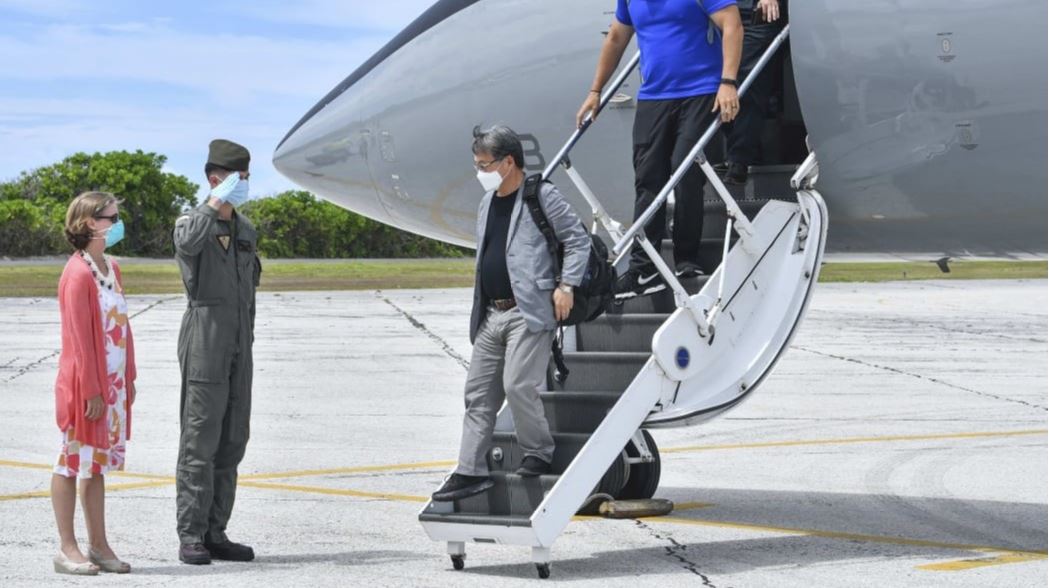 Nearly three years after the first in-person preliminary discussions were held between the United States and the Marshall Islands for a third funding agreement in the Compact of Free Association treaty, negotiations resumed again this week with a two-day meeting at Kwajalein.

The negotiations stalled after these first discussions were held in Pohnpei in the Federated States of Micronesia between President Trump's Secretary of State Mike Pompeo and RMI President Hilda Heine, and leaders of the FSM and Palau in early August 2019.

The following year, the Covid pandemic hit, both Trump and Heine were voted out of office, and new administrations in Washington and Majuro took over. While there were intermittent virtual conversations between US and Marshall Islands leaders in 2020 and 2021, negotiations were at a standstill. In the meantime, the Biden administration was coming under increasing pressure by the US Congress to prioritize talks with the three freely associated states in the face of increasingly successful diplomatic initiatives by China in the Pacific island region.

US funding is set to expire next year to these northern Pacific nations that are heavily dependent on aid from Washington. In addition, Marshall Islands leaders have said the talks cannot be limited to financial provisions and must address the lingering US nuclear weapons test legacy, issues related to the US government's missile testing range at Kwajalein, and climate problems.

President Biden injected a shot of momentum into the Compact picture when he named the special envoy for Compact negotiations Ambassador Joseph Yun in late March. Less than three months since he was appointed, Yun this week Tuesday arrived at Kwajalein to initiate the first round of face-to-face - albeit it with everyone wearing face masks - talks on the Compact.

Yun and his delegation were flown into Kwajalein on a US Marine Corps aircraft. They launched the first in-person Compact talks in three years Tuesday afternoon following the US delegation's arrival.

The first day featured no substantive discussions, according to people involved in the discussion. A person involved in the talks indicated that the "discussions were cordial and (showed) desire by both sides to work hard towards a mutually beneficial arrangement."

The Marshall Islands team, led by newly appointed Foreign Minister Kitlang Kabua, met with the US delegation Tuesday and Wednesday in a specially designated meeting area in the large multipurpose room at the junior-senior high school at the military base on Kwajalein.

"I am grateful to President Kabua for his kind invitation to host our delegation here in the Marshall Islands, and I appreciate the great efforts undertaken to bring us here during these unprecedented times," said Yun in a brief statement.

"Foreign Minister Kabua and I are having very productive discussions and making considerable progress. There is much work to be done, and we are optimistic our talks will be completed promptly with good results for all. The US remains committed to the RMI's development through the Compact of Free Association," Yun said.

"The Government of the Marshall Islands is thankful to US Special Presidential Envoy Joseph Yun and his team for traveling long distances and going through strict Covid-19 quarantine protocols to start the first round of talks in Kwajalein. The negotiations started this week in an atmosphere of cordiality and kinship. Both sides recognize that much work remains to be done and all are eager to work collaboratively in the spirit of kinship to produce a mutually beneficial win-win arrangement," she said.

A long list of Covid-prevention protocols was implemented to make it possible for this in-person meeting, including multiple Covid tests of all participants.

Yun and the team were in the RMI at the invitation of President Kabua, who wanted the first negotiating session to be in the Marshall Islands.

The first day featured no substantive discussions, according to people involved in the discussion. One person in the talks said the "discussions were cordial and (showed) desire by both sides to work hard towards a mutually beneficial arrangement."