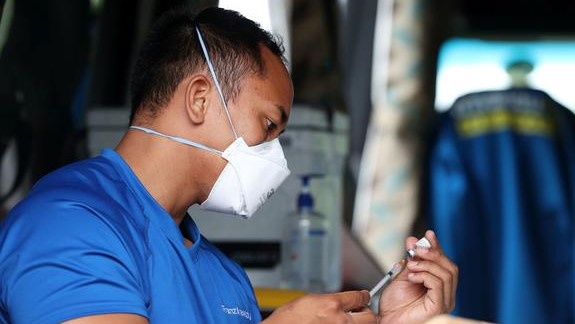 Representatives from Pacific-focused health providers are not surprised that Pasifika people make up about half of the cases in the latest Covid-19 outbreak.

The Whānau Ora Manager for Pasifika health service, The Fono, Europa Kupu said that close to 100 families have sought their support.

"It's increasing by the day," she said.

"Most of the referrals are from different clusters and gatherings that's been happening in the past few weeks. With the amount of family and individuals getting tested we're seeing the increase of positive cases."

Kupu adds that more support is needed from the government.

"We definitely need some more guidelines and support around accommodation, for families who are struggling financially from losing income when they have to isolate," she said.

Another health provider at the frontline, the Village Collective has noticed disruptions within Pacific families and youth caused by regular testing and isolation.

"What we're noticing is that this is happening frequently and so the disruption caused by the frequency of self-isolation while testing is happening or lack thereof is concerning," Village Collective general manager Letoa Henry Jenkins said.

"The wider effect is actually quite massive and I think we're gonna see more of these cases especially from the youth and within schools because you can't really tell people to stop mingling or stop being in contact with each other," he said.

"And of course parents and the whole household have to isolate as well. So you could see how that would disrupt their employment and their employers.

"I've had staff out over consecutively a three-week period because different children within the household have come into contact or been in the vicinity," Jenkins said.

He acknowledged the tough position the government is in however, he said the official Covid-19 response information has not been clear.

"The communication from the government to the community, to the providers I think became quite confusing," he said.

"Especially when some government officials or some ministries would contradict what another ministry would have said.

"Unfortunately it then gets to a situation where people kind of get fed up and just end up doing whatever they want to do," Jenkins said.

Despite the Ministry of Health stating that the Omicron outbreak was anticipated Europa Kupu feels no one was prepared.

"I don't think we were all ready for Omicron," Kupu said.

"I guess that reflects how our families and communities are coping with it now."

Families who have members testing positive or who are isolating are encouraged to call the Ministry of Social Development (MSD) Covid welfare line to receive immediate food support.