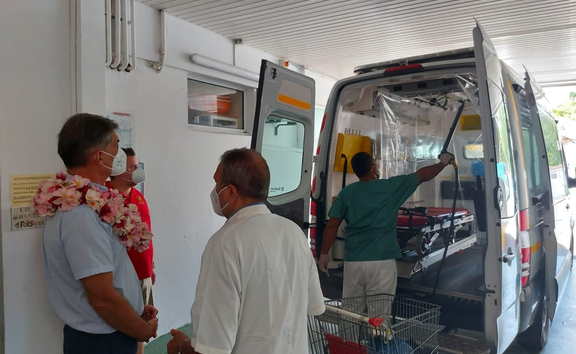 Medical services are stretched because of a rapid spread of Covid-19 Photo: FB French High Commission in French Polynesia

Another three people died over the weekend in French Polynesia's Covid-19 outbreak, bringing the tally to 629.

Figures released by the Health Ministry show 63 Covid-19 patients are in hospital, with 18 of them in intensive care.

The French High Commission has further eased restrictions, with the lockdown ending in the Society Islands where people were again allowed to go to the beach at the weekend.

Cinemas have reopened but may only operate at half capacity.

Public events for up to 500 participants are allowed again, provided there is appropriate spacing.

The nightly curfew remains in place.

Two men have been killed in separate crocodile attacks in Solomon Islands while diving for sea cucumbers at night.

Some people are calling for a crocodile cull to reduce numbers.

The deaths come less than a month after the country lifted a ban on harvesting the nocturnal marine animal, also called beche-de-mer, in a bid to boost is pandemic-hit economy.

Customers in China and South-East Asian countries consider the dried sea cucumbers a delicacy and one kilogram can fetch up to 170 dollars in the Solomons. Samoa will investigate allegations that an Australian accountant helped write the country's tax code making it easy to use tax avoidance schemes as well as promoting the country as a tax haven.

Samoa Observer reports that the allegations are part of the Pandora Papers leaks on a tax minimization scheme promoted by Graeme Biggs.

Mr Briggs is identified in emails as influencing Samoa's tax code to make it an attractive destination for businesses to incorporate offshore.

Prime Minister Fiame Naomi Mata'afa has told the Samoa Observer the government will review what's coming out of the Pandora Papers and intends to look at Samoa's tax policies. Pacific Conference of Churches to establish a working farm in Fiji

Ahead of the COP26 climate conference in Glasgow, the Pacific Conference of Churches is establishing a working farm that will become an eco-school for Pacific youth in Tailevu, Fiji.

The Conference of Churches is using 20 hectares of land for the farm that will use age old techniques and indigenous knowledge together with modern technology.

The manager, Netani Rika, said the Bishops Conference has been talking about climate change for 30 years but believes it now also needs to do something.

"Do something, and if nobody is going to do something then we have to do something for ourselves and the Project Tailevu is to show the Pacific, show our member churches, show our young people that the first steps can be taken with something small but those steps must be taken." Netani Rika from the Pacific Conference of Churches Photo: FFA

Almost 60-thousand people in Samoa await their second dose of the AstraZeneca vaccine and the country also plans to return some of the 100,000 unused doses it has before they expire in November.

Director General of Health, Leausa Dr Take Naseri is reported by the Samoa Observer saying it's important to try and send some back for use in other countries even though this might give the impression to foreign donors that Samoa is "taking their assistance lightly."

Latest data shows 56-percent of Samoa's eligible population has been fully vaccinated and more than 94-percent has received their first dose.

Children aged between 12-and-17 are scheduled to be vaccinated from next week after Pfizer vaccines provided by the New Zealand government arrive for them on October 16. Vanuatu's delegation is finally about to arrive at the World Expo in Dubai after being grounded in New Zealand because of challenges with excess luggage.

Vanuatu's director of external trade, Joe Pakoa, said the delegation paid for their extra luggage when departing from Vanuatu on Air Vaunatu.

But he said there were delays in Auckland while the Vanuatu Consulate and Emirate airline officials sorted out payment for the extra luggage from Auckland to Dubai.

The World Expo is held every five years but was postponed last year because of the Covid-19 pandemic.

Pakoa said Vanuatu is being represented by six business at the World Expo and they're looking forward to strengthening diplomatic and business relationships with the UAE.