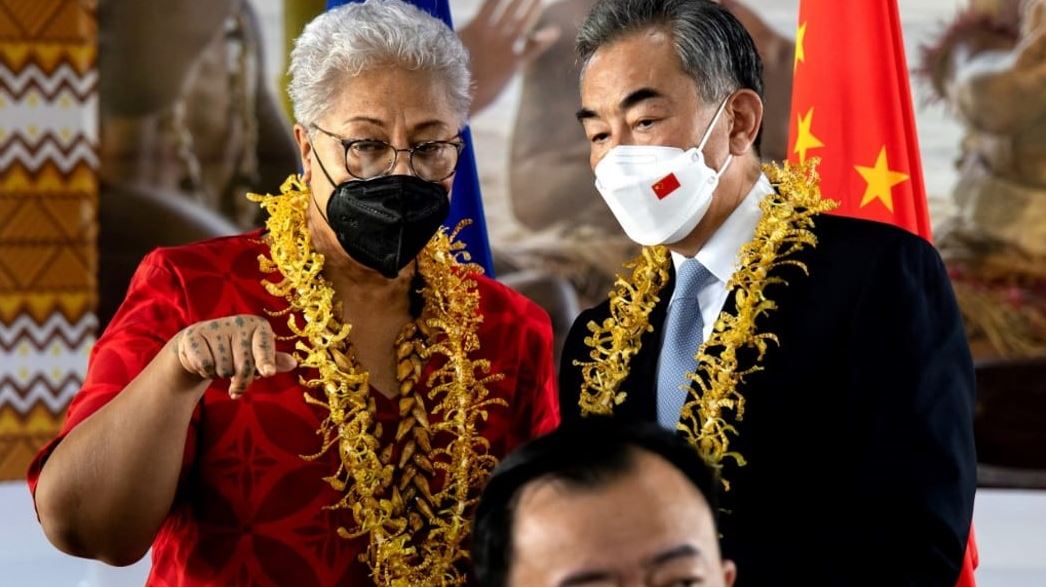 Analysis - China has been successful in signing multiple bilateral agreements with almost a dozen Pacific Island nations during its foreign minister Wang Yi's visit to the region.

Chinese Foreign Minister Wang Yi started his region-wide tour last Thursday in Solomon Islands and has since met Pacific leaders from Kiribati, Samoa, Fiji, Tonga, Niue, Cook Islands and Vanuatu. He is on his final lap as he wraps up with visits to Papua New Guinea and Easter Timor on Friday and Saturday.

Beijing's approach has alarmed Pacific geopolitics-watchers as well as its traditional Western partners, who are cautioning Pacific nations to tread carefully when entering into deals with China, particularly in the sensitive area of security.

But the Asian superpower has declared its efforts to strengthen its relationship with the region does not have any political strings attached to it, even as its efforts to win-over Pacific foreign ministers over a multilateral trade and security deal received a major pushback, which is being seen as a "a big win" for the region.

However, Wang has struck several development agreements focusing on economy, health, disaster response, and technology, among others during his whirlwind visit to enhance China-Pacific Island countries relations.

Here's what we know so far:

Solomon Islands has been at the centre of regional political debate for the past few weeks because it signed up a controversial security agreement with China.

Aside from that deal, Beijing and Honiara signed up further mutual development cooperation agreements in the areas of economic cooperation, health cooperation, sectorial cooperation. These include:

"The two countries reaffirm their commitments to work together on all issues of mutual concerns," Solomon Islands government said in a statement.

Prior to the arrival of Wang to the South Pacific, there were reports that Beijing was planning to sign up another security deal similar to the one with Solomon Islands.

There was speculation that Kiribati was the potential target for the security pact.

But there were agreements formalised on security.

The Kiribati government confirmed the discussions, instead, ranged from China's readiness to assist on climate action, Covid-19, medical cooperation, and fisheries production and processing to maximize Kiribati's benefits from our abundant resources."

Up to 10 bilateral agreements were signed between the two countries in a range of areas. These included:

"In just slightly over two years after the resumption of our diplomatic ties, both our countries have embarked on a very fruitful cooperation to cultivate our bilateral relations. These projects will deliver meaningful and tangible impacts on the lives of our people," Kiribait president Taneti Maaau said.

In his stopover in Samoa, Wang signed three agreements. These were:

Samoan prime minister Fiame Naomi Mata'afa said the bilateral cooperation agreements were initiated "a number of years ago" and were not new development.

Fiame has also labelled China's proposal to push through its multilateral economic and security deal "abnormal" and such an agreement could not be agreed to if the "region has not met to discuss it."

China has enjoyed much favour in its relationship with Fiji's prime minister Frank Bainimarama. This trip was no different.

According to China's Ambassador to Fiji, the two countries signed three agreements focusing on economic cooperation but further details were not provided.

Wang said after meeting with Bainimarama "Our two sides agreed to further synergise our strategies, expand cooperation in economy, trade, agriculture, fisheries, tourism, civil aviation, education, law enforcement and emergency management and other areas within the framework of Blet and Road cooperation for mutual benefit and win-win outcomes."

Bainimarama stressed the two countries "have a solid foundation".

He downplayed the geopolitical tussle taking place in the region between Beijing and Western countries as the most central issue facing the region.

He reinforced that climate change was the greatest threat facing the Pacific and sought greater commitment from China on climate action.

The Tongan government announced it had signed "several bilateral agreements" with China after discussions focusing on mutual respect and the common interest of the people of the two countries.

According to the China's foreign ministry, China and Tonga "reached extensive consensus on deepening cooperation in various fields and advancing Belt and Road cooperation, and signed a batch of economic cooperation agreements."

RNZ Pacific's Tonga correspondent Kalafi Moala said China has been behind many development projects in the Kingdom.

"There's been a lot of local developments in Tonga by the Chinese, and that includes the restoration of Nukualofa since the riots of 2006 and we still have a loan from China that we still need to make payments on, it's about $118 million dollars," Moala said.

He met with prime minister Bob Loughman and his cabinet ministers on Wednesday, where the two countries finalised cooperation agreements on in the areas of economic technology, medical and health case, and marine economy.

No further details on the agreements have been provided.

In a statement, China's foreign ministry said Loughman "spoke highly of the strong leadership of the Communist Party of China with Xi Jinping at its core."

Loughman, on the other hand, said China "has proved to be a true friend of Vanuatu with concrete actions".

He "firmly believes that cooperation with China will better help PICs seize development opportunities, and will further enhance bilateral cooperation between PICs and China.

Loughman has also indicated his government's full support towards China's "important role" in the region and its plans to expand its common development vision with Pacific Island countries.

Brown said China was willing to discuss and plan the next step of cooperation according to the development needs of the Cook Islands.

According to Wang, the two sides could expand cooperation in tourism, infrastructure and education at the sub-national level to help the economic recovery of the Cook Islands.

"China is also willing to discuss and conduct more trilateral cooperation on the basis of past successful experience," he said.

Brown said, "the Cook Islands firmly believes that the future of the Cook Islands is closely tied to China, and is ready to work with China to push for even greater development of bilateral relations in the next 25 years."

"The Cook Islands attaches great importance to the China-Pacific Island Countries Foreign Ministers' Meeting mechanism and the next cooperation initiatives proposed by China," he said.

Although there were no details for any formal agreements signed, China's foreign ministry said "the two sides agreed to strengthen cooperation in Chinese language education, support and encourage young people in the Cook Islands to learn Chinese, and cultivate more friendly envoys", adding "Both sides agreed to continue to support each other in the international community."

Premier of Niue Dalton Tagelagi said Beijing had "made positive contributions towards Niue's prosperity" and it is "pleased" the relationship between the two nations continues to grow.

"We will continue to progress our close relationship and friendship with China to further advance bilateral relations and achieve common development and prosperity," Premier Tagelagi said.

"Joint initiatives with China, such as roading and other strategic development and investment opportunities, will ultimately improve the quality of life for everyone in Niue and are part of Niue's key aspiration toward self-sufficiency. China has heard Niue's call, and we are very grateful for that."

He said Nuie "supports in principle" China's proposal in investing in common development and prosperity in the region.

"We would like time to consider how the arrangement with China will support existing regional plans to ensure that our priorities are aligned and will be beneficial for all of us for regional prosperity.

"I am confident that Niue's officials will work together to ensure that the final document will reflect our shared vision," he said.

He believed countries in the region need to work out how to better manage the power imbalance in their relationships with China.

Rabuka said the Pacific was comfortable with the relationships it has had with traditional partners in Australia and New Zealand, the United Kingdom, and the United States.

"New influences will probably take us time to get used to. I am hopeful that the government of our friends of our joint development partners will continue to help us as we try to map our way forward," he said.

Former Tuvalu prime minister Enele Sopoaga said the growing influence on China in the Pacific was a "scary development" for the region.

Sopoaga said Pacific nations were being used as "canary in the coal mine."

"The decision to take the draft [Common development Vision] is up to individual respective countries in the Pacific. But I think this is a rather scary development that we are hearing about now," he said.