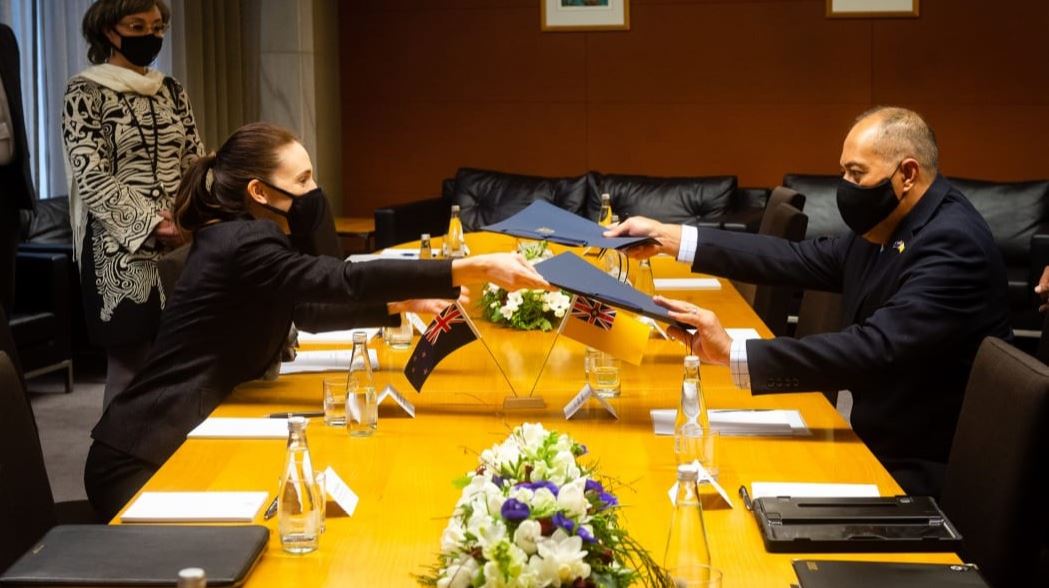 It is the first time Niue's leader has visited the New Zealand Parliament and was also his first official bilateral overseas visit since taking office in June 2020.

Tagelagi and Jacinda Ardern on Thursday signed a renewed partnership agreement between Aotearoa and Niue.

In 2019, the two countries signed a strategic partnership agreement that promised greater co-operation on issues including Niue's prosperity, response to climate change, peace and security, and protecting Niue's people.

During the bilateral meeting for the signing Tagelagi thanked Ardern for the Māori welcome which acknowledged both nations' ancestors.

Ardern complimented Tagelagi for Niue's ocean policies, and its success at keeping Covid-19 out of the Niue community.

The leaders also shared their joint commitment to renewable energy - which they both spoke about during the recent Pacific Islands Forum summit.

Tagelagi is in New Zealand ahead of competing in the lawn bowls competition at the Commonwealth Games which begin on July 28 in Birmingham, UK.

It is the third time he has competed in the Games, after entering in 2014 and 2018, but his first as the nation's leader.

Tagelagi told RNZ Pacific it was important Niue's presence was felt at the Games.

"I know the team has been training really hard and I am looking forward to joining them.

"It's pretty warm there just like in Niue. The grass is similar to what we have back home.

"Participation in these things are very important, it's one of those life experiences, it's something you can't take away."

Tagelagi said Niue's people remain on edge four weeks after the island nation opened its borders and some of the first arrivals tested positive for Covid-19.

Niue has five active covid cases at the border but there is no community transmission.

"The covid situation at the moment is stable. And again how thankful we are in that relationship with New Zealand that realising that as we are re-opening our borders we have some support on the ground from here which really helps. It's not easy, there's still that uncertainty for the locals."